Directing a queer audio drama at the online festival, the stage artist opens up about making art during a pandemic, racism in theatre and being mentored by musical legends 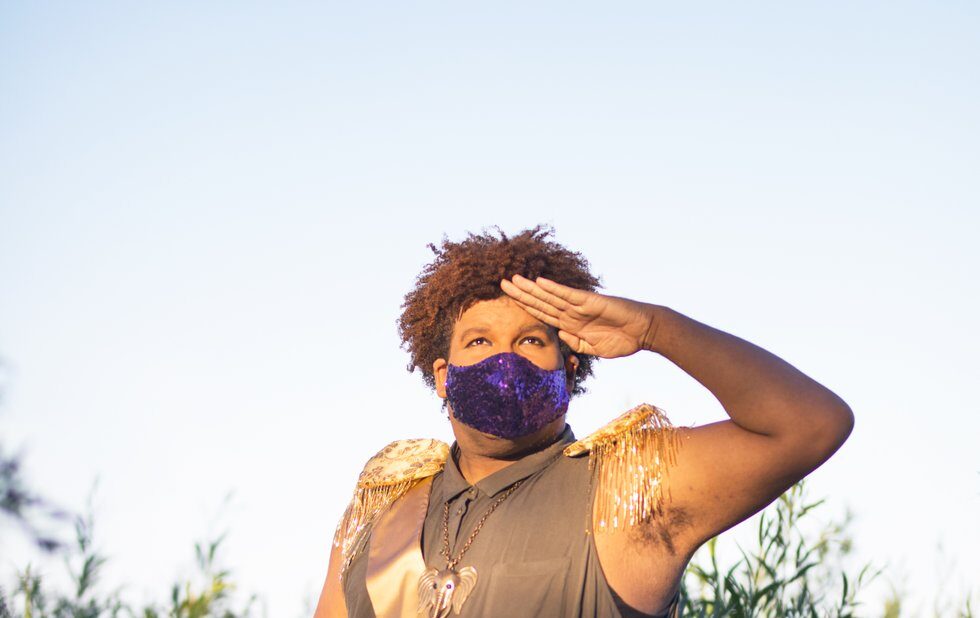 Anyone who’s attended the Toronto Fringe Festival in the last decade will recognize Ryan G. Hinds. In solo shows like 2015’s Starry Notions and 2018’s #KanderAndEbb he’s shone and sparkled as brightly as the inevitable sequins adorning his costumes.

This year, Hinds is part of the Fringe’s scaled-down, virtual Fringe Collective – but, alas, not as a performer. He’s directing Sarah/Frank, the latest play by Steven Elliott Jackson, whose queer historical drama The Seat Next To The King was one of the festival’s most lauded recent productions.

Presented as an audio drama, the show concerns a real-life Canadian woman named Sarah who fought in the American Civil War under the name Frank.

When he was approached to direct it by the play’s star, Redheaded Coffeeshop Girl’s Rebecca Perry, Hinds says he questioned whether he’d be a good fit for a period piece. But after reading Jackson’s script he connected to the trans character’s central dilemma.

“It really jumped out at me that the central character of Sarah/Frank isn’t easily classifiable, and the whole play is about them trying different ways of existing in places that aren’t welcoming,” says Hinds.

“As a mixed-race queer person, I understand that struggle intimately – that’s essentially every day of my life.”

Hinds definitely knows about being unwelcome and made to feel uncomfortable in seemingly safe spaces.

A few weeks ago, when the Stratford Festival boldly introduced the #inthedressingroom hashtag in reaction to Black Lives Matter, asking Black and other POC artists to share their experiences in the industry, Hinds chimed in with a whopper, revealing that colleagues would touch his hair repeatedly, joke about his makeup towel and say things like “When we’re in the wings, smile so I can find ya!” and “Big scary black guy but you’re so nice!”

“I have a loud voice, as an artist and as a person,” says Hinds, whose charisma and exuberance shine through, even on the phone.

Ironically, a couple of days later, his friend and colleague from Canadian Actors’ Equity council, Michaela Washburn, who was going to be part of an Indigenous takeover of Stratford’s social media platforms, asked Hinds if he would like to help out and discuss ways that Black communities and Indigenous communities have worked together and might do so in the future.

So for a time Hinds was posting messages from the Stratford Festival channels.

“Let me just say I never thought I would have the passwords to Stratford’s social media accounts,” he laughs. “It was high on the huge list of things I never thought would happen in the world.”

Hinds has toured with his Fringe shows and performed with other companies like Thunder Bay’s Magnus Theatre and Theatre New Brunswick (a lavish, Sarah Stanley-directed production of Erin Shields’s Paradise Lost at Ottawa’s National Arts Centre was cancelled before the pandemic). He says the issue of racial equity goes beyond Stratford or any other institution.

“When are we going to see a company that isn’t specifically dedicated to Black artists say, ‘You know what, we’re handing over our season – not just our Instagram account – to people of colour, to marginalized artists, to all the people that we’ve kept out’? I would love to see that, and not just for potential opportunities for myself. I want to see what all of us can do. I want to see shows from everyone, people who never thought they’d get a chance to create a show at such a company or institution. That would be powerful, lasting change.”

“There was a solid week when I didn’t get out of bed, because it was so overwhelming and depressing,” he says. “I’m generally an optimistic, funny person and I have found that part of myself really tested in the past few months.” 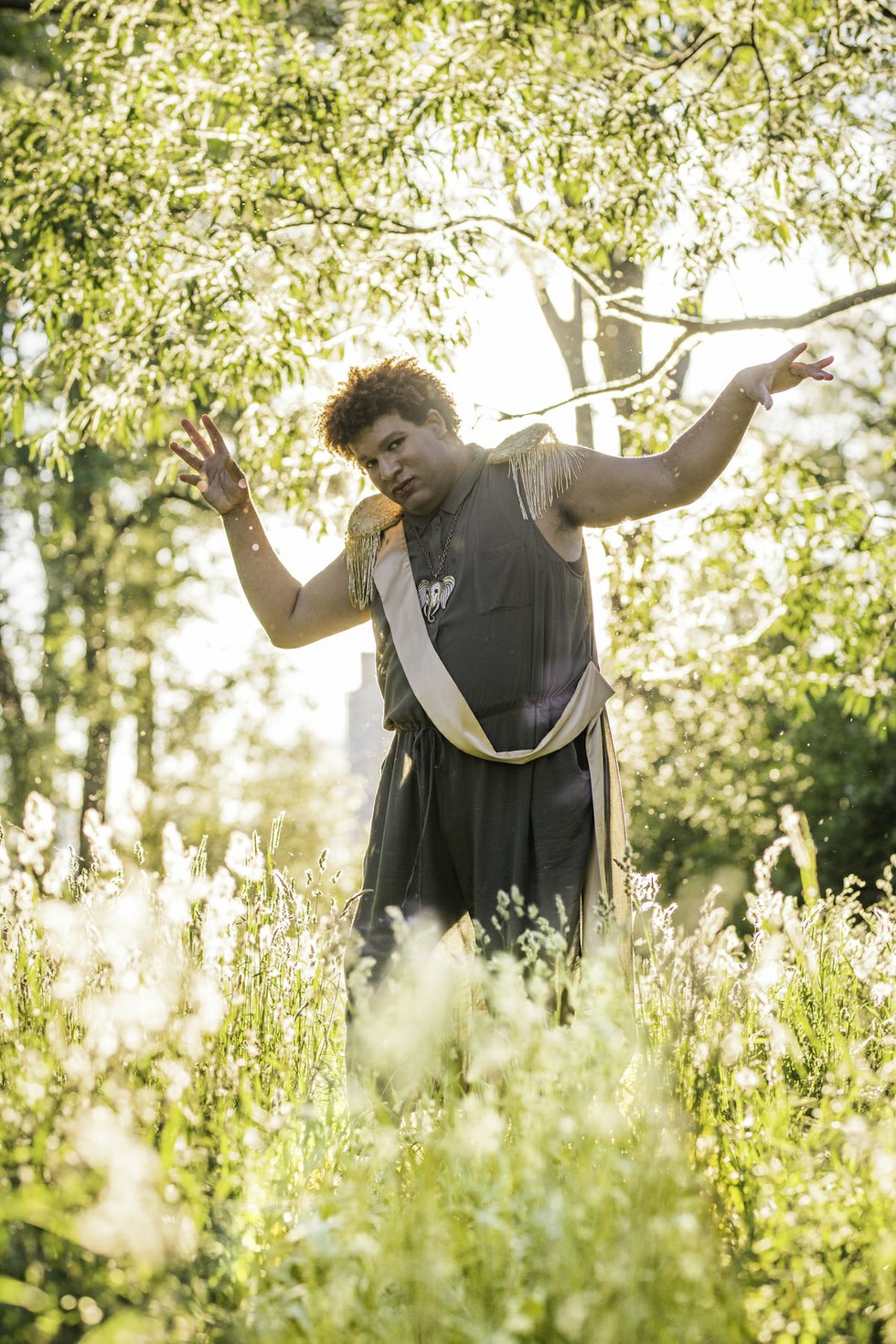 Although he and the Paradise Lost cast got to do one rehearsal over Zoom before the production shut down, he’s kept busy, performing a 45-minute cabaret for Buddies in Bad Times, taking part in a virtual panel with his lemonTree Creations colleagues, doing a BLM fundraiser with all-male burlesque troupe Boylesque and adding pizzazz to CBC Gem’s splashy Pride special.

Losing his in-person Pride gigs, not just here but in other cities, has resulted in a big loss of income.

“And I miss getting to do the screamy, huggy thing we all do when we see each other on the street,” he says. “But I am grateful for the chance to sit and think about Pride and community and our history and where we’re going.”

Hinds, who grew up in Mississauga, can’t remember when he didn’t want to be in theatre. His earliest memory was being two years old and taken by his mother to see a children’s puppet show about Babar the Elephant.

“I remember clearly how watching somebody dress up made me feel,” he says. “I don’t remember any details about the show, but I remember how that experience made me feel.”

His mother – who raised him alone – made sure he saw as much theatre as possible.

“To her, theatre didn’t mean big shows – it happened in libraries, town squares, the food court at the mall.”

And then came the life-changing moment when, in 1986, he saw the original Toronto production of Cats.

“I know a lot of people hate Cats,” he says, “but when you’re six years old and walk into a show that is so dedicated to world-building and character-making, where a pirate ship magically appears out of nowhere and there’s tap-dancing and a moving, gorgeous death at the end… That deeply, deeply affected me.”

A few years later, when he was walking up Yonge Street, he fan-boyed over seeing Cats company member Mark Cassius on the street.

“I stopped him and I said, ‘Mark, you don’t know me, but you changed my life.”

“We were two professionals working together,” he says. “I remembered the way Mark made me feel over the years, telling me I could have a career, could get through some of the doors that I felt were closed to me. Getting to take a curtain call with my hero was something I will never forget.”

Another mentor was the legendary Chita Rivera, whom he met during the Toronto run of Kiss Of The Spiderwoman. He chronicled their decades-long friendship in #KanderAndEbb, his solo show about his connection to the works of John Kander and Fred Ebb.

“She showed me what was possible for somebody who is racialized to be the thing that people expect but also so much more. She showed me how to step out of the box.”

Once, early on in his career, when he was visiting the West Side Story and Chicago actor in New York, he told her he was enjoying acting but wanted to do more: direct, create works, do cabaret.

“And that’s turned out to be true.”