Superior vintageCity Of Wine is no vin. 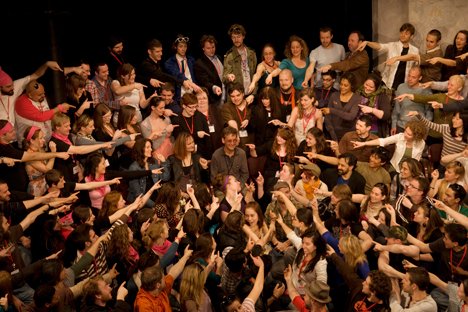 City of Wine has a large cast and crew.

City of Wine has a large cast and crew.

The cycle traces the history of the Greek city of Thebes from its founding to its dissolution during the Trojan War.

It draws its title from the wine that’s consumed in just about every play, often by the chorus of UnNamed, the ordinary Thebans whose lives follow and mirror but also affect the mortal and divine characters, who include Oedipus, Tiresias, Zeus and Aphrodite. The chorus is frequently, in one way or another, at the service of Bacchus, the god of wine and Thebes’s titular deity.

What made the event even more exciting than the fine writing was the means of presentation, a great idea by Nightswimming’s Brian Quirt and Naomi Campbell. Seven theatre schools from across the country each brought one play to the event. The sense of community informing the cycle itself was reflected by the young community of actors, the next generation of Canadian theatre artists.

George Brown Theatre’s Laius, initially directed by Eda Holmes and here restaged by Severn Thompson, was tighter and stronger than it was last winter. Jocasta, presented by Vancouver’s Studio 58, focuses on the queen who unwittingly weds her own son, Oedipus director Craig Hall’s production was a highlight of the cycle, with a fine performance by Genevieve Fleming in the title role.

Concordia University’s production of Oedipus was the cycle’s problematic production. Under director Ulla Neuerburg-Denzer, the storytelling was weak and the actors tended to shout rather than find the depth of despair in the plague-ridden world of Thebes we were rarely engaged in the City Of Wine’s most recognizable tale, despite some good individual performances.

Things got back on track with Creon, in which the mortal figures take over the narrative to enact the tale of Antigone and her uncle Creon, who is forced to bring about tragedy despite his good intentions. Director Jillian Keiley set it in a Maritimes tavern, with fiddle music, song and wine feeding the story, performed by Cornerbrook’s Theatre at Grenfell.

Seven, directed by Sarah Stanley for York University, brings the UnNamed to their final destination, the gates of Troy, where they’re sent on a suicide mission to ensure Greek victory. They go off to their deaths repeating the cycle’s often-sung refrain, “Thebes makes a hell of a wine.”

Watching the entire cycle allowed the echoes and ironies of the text to have full weight, which the young companies clearly enjoyed. Just as important for them were the artistic links forged, the opportunities for brainstorming, the chance to see the work of other performers from across the country and maybe plan collaborations down the road.

We felt by the end that Dickens and all the artists associated with the production had poured seven bottles of story into us – the result was intoxicating.

Here’s a toast to Bacchus in hopes that the cycle has continued life, for what we saw was an extraordinary piece of theatre as well as an epic undertaking.

Most Holocaust stories either end tragically or are about miraculous escapes. Almost inevitably they’re set in Europe, with Jews fleeing the Nazis.

But Ten Green Bottles, adapted by director Mark Cassidy and the cast from Vivian Jeanette Kaplan’s book, extends the playing area to Shanghai, to which the Viennese-born Karpel family escapes in 1939 when they realize that Hitler’s forces can’t be avoided.

What they don’t anticipate is that they’ve fled to another field of war, where the Japanese are bent on subjugating the Chinese.

“They ran halfway across the world only to become another group oppressed under Japanese occupation,” says Cassidy, who helms the show for Te-Amim Music Theatre. “By 1939, the problem was not just getting out of Germany or Austria, but finding a country that would take them in Shanghai was one of the few places that would.

“There’s something incredible about the comparisons between Vienna and Shanghai in the 30s and 40s. There was a ghetto in Shanghai, too, where some 20,000 Jews coexisted with poor Chinese.”

During the year-long development of the work, Cassidy and his actors braided together past and present. Flashbacks fill in the emotional and narrative background of the Karpels, who settled in Canada in the late 40s.

“The play is about why they survive and how they hold onto their culture in a foreign country where their neighbours were Christian nuns and native Chinese. Ironically, the Karpels became more aware of their Jewishness – in Vienna they defined themselves as Austrians – and didn’t mingle a lot with the other cultures. They coexisted rather than mixed.”

The new director graduates from the National Theatre School present their talents this weekend in the Directors’ Showcase, sponsored by Crow’s Theatre, whose head, Chris Abraham, is himself an NTS grad.

The showcase features performances of Bernard-Marie Koltès’s In The Solitude Of Cotton Fields, directed by Anita Rochon Caryl Churchill’s Far Away, directed by Philip McKee and a work helmed by Vahid Rahbani.

In addition, Rochon presents her own work, Now he belongs to the ages (angels) and Rose Plotek directs Churchill’s brief, controversial Seven Jewish Children: A Play For Gaza.

The weekend also features a directors’ exchange – a panel discussion that gathers together directors from across the country: Peter Hinton, Matthew Jocelyn, Daniel Brooks, Yvette Nolan, Richard Rose, Lise Ann Johnson, Jillian Keiley and Jackie Maxwell. Curated by Christian Barry and moderated by Sarah Stanley, the panel is on Saturday (May 16).