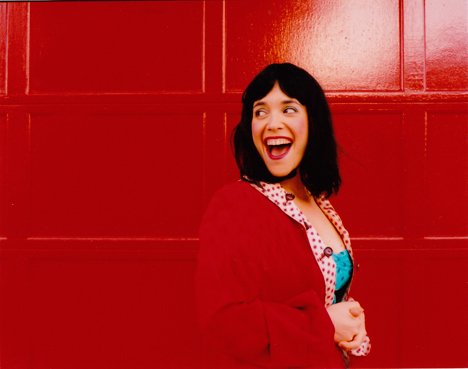 Remember Lupe, that Latina who wowed Fringe audiences with her hoped-for, clandestine meeting with her inamorato at the Honest Ed loading docks?

(And psst, don’t tell anyone, but that lover has a major hand in the operation of Honest Ed’s. He’s also a big-time theatre producer with the initials DM.)

Lupe (Melissa D’Agostino) is back to celebrate the holiday season with A Very Lupe Xmas, in which she recounts the story of the Wise Men using a barnyard full of livestock (don’t know if they’ll be real) and shares seasonal cheer with her audience.

You might even snack on some Timbits with her she’s always generous in sharing her treats and her passions with an audience.

One of our favourite multidisciplinary performers, actor/dancer/choreographer Viv Moore, offers a rare solo show this week.

Worcestershire Saucy pays tribute to “the rhythms, myths and stories arising from the Victorian construct of Englishness.”

There’s sure to be a satiric twinkle in Moore’s eye as she explores such ideas as home, tradition and nostalgia, using dance styles that include clog, English musical hall and Butoh.

She’s also the only performer we know who teaches both fight choreography and social dance.

Want to treat the youngsters to early holiday entertainment? Of course there’s the Nutcracker and this year’s panto, Robin Hood, but don’t forget about other productions.

The show’s about Jack, a winter sprite, who’s thinking about leaving his seasonal job of “nose nipping” to become human does this mean the end of winter? Song, dance and comedy feature prominently in a work that offers chuckles to adults as well as children ages four and up.

George Brown Theatre School offers Munsch Crunch, an adaptation of five tales by family fave Robert Munsch. Suitable for children aged three and up, the production features performers in the school’s second-year program and is directed by Stewart Arnott.

St. Catharines-based troupe Carousel Players visit the Lorraine Kimsa Theatre for Young People with Carrie Costello’s There’s A Mouse In My House. Based on Sheree Fitch’s children’s book, the audience-participation production – aimed at youngsters four to eight – focuses on a brave mouse who makes friends with a couple of children.

A few years ago we saw a moving, thoughtful show called CP Salon, in which Fides Krucker collaborated with singer/storyteller Kazumi Tsuruoka, a political activist who explores his own experience with cerebral palsy.

Now the production’s been reworked, with Tsuruoka and pianist Tania Gill, to look at the love story of a man with CP. Using rhythm and blues to present its narrative, the show, directed by Krucker and presented by Good Hair Day Productions, has been touring campuses this fall and includes a discussion following the presentation.

The final performance is Friday (December 4) at York University.