Haitian heatIf it's getting too cold for. 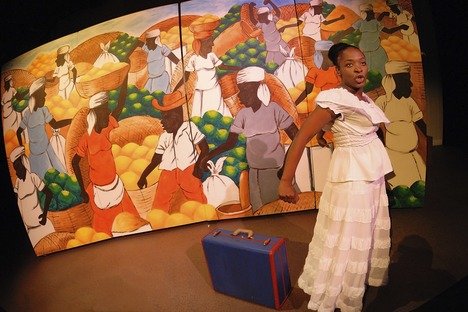 If it’s getting too cold for you, a trip to Haiti – courtesy of Djennie Laguerre’s Rendez-Vous Lakay – will prove a warm-hearted theatrical treat.

The best of Théâtre Français de Toronto’s current triple bill, Laguerre’s solo show follows two Haitian-born Canadian sisters who travel home for the funeral of the father who deserted them.

A reconciliation with the past and a look to the future, the work benefits from Laguerre’s storytelling skills. Inhabiting a dozen or so characters, giving them a richly detailed physical and verbal life, she involves the audience in the show, not just with a call-and-response technique but also by bringing them emotionally into her world.

We saw an earlier version of the piece a few years ago at SummerWorks, but it really blossoms when performed in French and with an audience that responds to its blend of French and Creole (with English surtitles for those of us who need them).

In the hands of Laguerre and director Sara Rénélik, the show is sensual, funny and ultimately moving, as the sibs discover their father’s second family and learn to bury their anger along with their father. Just wish the script had a better resolution it ends too abruptly.

The other pieces on the program, Martin-David Peters’s Le Domestique and Les Noirs Sont Heureux (Black People Are Happy), are less successful. Both send up racism but do so with heavy-handed and forced humour.

The first is a monologue by a put-upon black servant (the author) confronting his white employer in the second, a condescending white academic (Guy Mignault, who also directs these two works) who accepts black stereotypes, meets a couple (Peters and Laguerre) who don’t at all fit his concepts.

Le Domestique has a dated and precious feel, while Les Noirs is best when Laguerre’s spirited, disputatious wife fights with her equally short-tempered partner.

Both performances on Saturday (December 12) are surtitled.

Too bad that Cow Over Moon’s downtown run of Jack Frost was so short.

The popular kids’ theatre company knows how to entertain adults as well as younger viewers, and with this winter-based tale they pick up on the season and provide a little satire on climate change and the upcoming Winter Olympics.

Enter the title character (Michael Balazo), a cold-weather, nose-nipping sprite who’s forced by a self-centred mayor (Kathleen Phillips) to help him cheat in the upcoming Winterbration Competition. Jack’s life becomes more complicated when he falls in love with snowball-throwing champ Trudy Montag (Jackie Pijper) and wants to be human so he can touch her without freezing her solid.

Created by director Terrance Balazo and the cast (which includes Aaron Knight as Trudy’s silly father), the narrative gets a little far-fetched by the end, but the kids love it, contributing whenever asked (and sometimes when they aren’t, but the actors handle the shout-out overflow skilfully).

We’re glad the Mississauga-based troupe, which until now has been seen downtown mostly during the Fringe, has a growing presence in the city’s core.

If you have time over the holiday season, think about applying for next year’s SummerWorks, which runs August 5 to 15.

For the first time, this year’s festival includes 75-minute productions as well as hour-long shows.

Deadline for local applications is February 1, while the national series has a January 1 deadline.

There are lots of busy bees at Theatre Passe Muraille this week.

First there’s the season’s second Buzz fest, which gives audiences a short look at works in progress and allows for feedback to the participating artists.

For a full schedule, see passemuraille.on.ca.

And that’s not all the activity at the theatre. Theatre Jones Roy finishes up its sold-out run of Letters To My Grandma with an added performance on Sunday (December 13), 4:30 pm, followed by a fundraiser for its January production of Macbeth Reflected. For tickets, see artsboxoffice.ca or call 416-504-7529.3