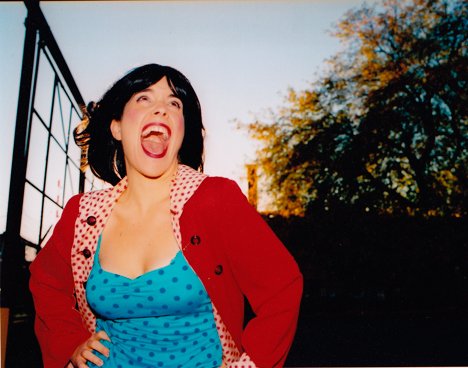 Curated by Diana Kolpak and hosted by K-AMP, a trio of harmonizing divas (two of them in drag), the show was full of red noses (though not exclusively) and won lots of laughs from the full house.

The evening began with a pre-show in which white-garbed scientists (Christel Bartelse, Shantelle Simone Landry, Claire Ness and Dave McKay) conducted various experiments on viewers, including using Q-Tips to examine our hands, offering jelly beans and scribbling down whether or not we took them (we did take them, pushing the envelope by requesting red ones).

The four scientists worked throughout the evening, regularly pouring different-coloured liquids into the pandemonium machine, an action that seemed to rejuvenate the hosts.

The performances were as varied as the hues of the liquids and jelly beans. K-AMP’s harmonically skilful musical numbers included a tricky piece called O-R-B-I-T-I-N-G, in which they became rotating bodies in space, bodies that eventually spun out of control and wound down.

Kathleen Le Roux’s guitar-playing Harriet offered a song about the lonesomeness of old age, while Viv Moore’s tipsy schoolgirl read poetry and teenage-diary entries and concluded with a straight-faced clog dance to Gilbert and Sullivan.

Professor Keepressor (James Fisher) recorded the audience making various sounds (including a solo belch) and then sampled them back to us in musical episodes. The set-up for The Bohemian, a piece by Thug (Rick Kunst) and Mug (Ken MacDougall) was fine – a lonely man celebrating his birthday is joined by a big, bossy yellow mouse – but the narrative didn’t pay off.

The biggest laughs went to Foo (Helen Donnelly) and Lupe (Melissa D’Agostino). Foo, who spoke a language of guttural and high-pitched sounds, regularly scratched one ear like a manic cat. Her number with partner Saucisse – a sausage she threatened with a knife – began humorously and then became quite touching.

Latina Lupe sported a new hairstyle but hasn’t lost her winning exuberance. She talked to us about New Year’s resolutions and revealed her own determination to become a best-selling author of self-help books. Funnier still, she drew someone out of the audience and demonstrated how to break up with a tiresome partner.