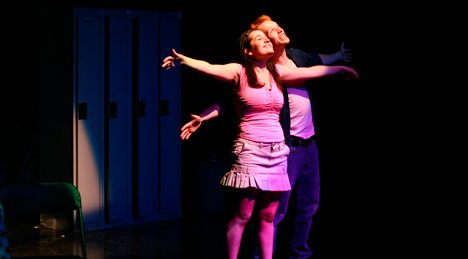 Playwright/director Julian DeZotti’s Guns & Roses captures the language and attitude of teens caught up with sex and drugs, specifically ecstasy.

The play, which had a short run at the Toronto Centre for the Arts last week, follows five high schoolers finishing their year and heading into summer, looking to get laid, sort out their futures and connect with the right people.

Presented by the Original Norwegian in association with the Toronto Centre and Breakaway Addiction Services, Guns & Roses doesn’t talk down or preach to its teen audience, but rather creates believable figures from various levels of society.

There’s the rich Jinks (Colin Doyle), who uses his father’s money and his mother’s Mercedes to peddle E he’ll do anything to get the attention of manipulative ice queen Bijou (Hannah Cheesman), who toys with him but wants the more down-to-earth Josh (Brendan McMurtry-Howlett), a financially needy stock boy in one of Jinks’s father’s grocery stores and Jinks’s partner in drug deals.

The timid and parentally controlled Arianna (Amy Lee) also has an interest in Josh, and so does Josh’s workmate Robbie (Ben Sanders).

The production makes use of Cam Davis’s video and projections, including text messages, as part of the action, and the live sound design by DJ FASE adds a contemporary musical underpinning to the production.

Though the characters of Josh and Robbie could use further development, McMurtry-Howlett and Sanders give them an emotional fullness that connects with student viewers.

With its explicit language and talk of sex, Guns & Roses is the kind of show that mirrors the lives of many teens, and at the performance we attended the audience was caught up in the action.

The scenes between the two women are especially strong, with Cheesman and Lee nicely contrasted in terms of their energy. Speaking of energy, there’s no lack of it from Doyle, who quickly ingratiates himself with the audience.

A footnote: before the run, some people called the box office to book tickets for Guns N’ Roses’ Axl Rose and company. Nope – different kind of performance.

The third annual Next Stage Festival didn’t just succeed artistically it also did well in terms of numbers.

The festival – the winter presentation by the Toronto Fringe – saw an audience increase of 18 per cent over last year. Over 6,000 people bought tickets, which meant more than $59,000 in box office receipts.

The festival didn’t just raise funds for the artists. During the last four days of Next Stage, organizers asked patrons to contribute to the Haitian relief work of Doctors Without Borders. By the end of the festival Sunday (January 17), audience members had donated over $4,000.

We caught up last weekend with new company Theatre Caravel, who remounted their production of Over at the Theatre Centre (closed January 16).

Originally presented in a workshop space last fall, Darren O’Donnell’s play about a brother (Eric Double) and sister (Julia Nish-Lapidus) trying to sort out their past and present works well in the more cavernous space.

Part of the success is due to O’Donnell’s clever, rapid-fire, absurdist script, peppered with music-hall turns in which the sibs step into a spotlight and present what might be fantasy moments, with touches of incest along the way.

Wordplay figures prominently, and there are also stylistic echoes of another O’Donnell play, boxhead.

But a lot of the credit goes to the performers and their chemistry. Working with directors Tracy Bradley and Chelsea Ferrando, Double and Nish-Lapidus give strong physical life to the pair as they recount their family history and try to break the cycle of their lives.

They play so well together that it’s a shame the run was only three performances. Hope we get to see them again. And soon.

We don’t usually mention audition calls, but the one from Mixed Company Theatre is unusual.

The troupe is looking for youths who are at risk or have experienced homelessness to help develop and present – along with the company’s theatre artists – an original, interactive play as part of the Bouncing Back Project.

The show will tour Toronto shelters, community centres and schools to raise awareness of issues related to homelessness and substance abuse.

Young people aged 15 to 25 are invited to be part of the four-week project. Open auditions happen Wednesday (January 27), at 157 Carlton those interested are encouraged to book a slot. For more info, 416-515-8080 or duncan@mixedcompanytheatre.com.