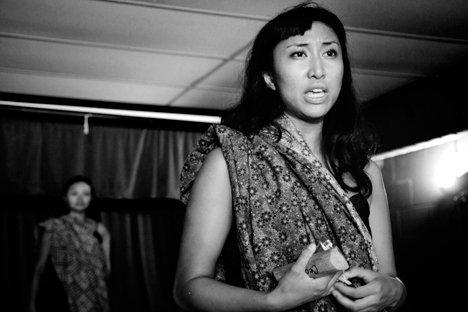 Ever think about migrant workers as a country’s export?

“Folk art is our way of telling stories, with an emphasis on the stories of today,” says artistic director Catherine Hernandez. “We’re a company devoted to theatre work by and about women of colour, and the situation of nannies is firmly within that mandate.”

The group was inspired in part by a picture of a group of Filipina women at Pearson Airport, arriving to work in Canadian homes.

“The government of Philippines president Gloria Macapagal-Arroyo is the third to encourage the export of nannies, who are urged to make money abroad and send or bring it home. It’s seen as heroic to be away from their families, but the situation isn’t the happiest for them or those they leave behind.”

Conducting a series of interviews, Hernandez and fellow creators Karen Ancheta, Aura Carcueva and musician Romeo Candido learned that employers often take advantage nannies, requiring them to work late, be on call constantly and do other work that’s not part of their contract. Sexual harassment can also be part of the impositions they face.

The three women play a variety of nannies, some based on local interviews and others on YouTube clips they’d watched a hiring company in Hong Kong, which is where some Filipina women work before coming to Canada, puts up “audition” films in which the women sell themselves to potential Canadian employers.

“It’s a version of online dating,” offers Hernandez. “It was haunting for us to watch these women, who are sometimes desperate to find work. They make quite personal statements, sharing not only what life is like for them now but also their dreams.”

What the Sulong artists realized is that these migrant workers – for that’s what these nannies are – often sacrifice a traditional family life. The only way the women connect with their families is via phone calls or Internet, often for four years.

“That’s determined by the Live-in Caregiver Program (LCP) set up by the Canadian government. The women have to do 24 months of service as nannies within a 48-month period.

“Then it can be another hurdle to wait for citizenship, and yet another to bring over family members.”

When creating material for the show, Hernandez and the others knew they’d made the right choice about a scene when they all felt goosebumps. They set themselves certain parameters, too: the soundscape had to be live and props had to fit into a single green Loblaws box.

The key prop is the traditional malong, a tube of batik fabric that the actors transform into a baby, laundry, a piece of clothing and ultimately a badge of honour. The shifts happen throughout the show, which relies on traditional dances to move the action along.

Beginning and ending the show, for instance, is a harvest dance, but one put to a contemporary use: the women don’t gather a conventional crop but instead harvest Canadian money.

“It’s important that these women we speak of should be revered and respected. We began calling them ‘ate,’ or big sister.

“We want to be the conduit between the nannies and the audience, so that viewers can understand their plight.”

Jumping over the Bard

Working with designer Patrick Du Wors, Madoc-Jones set Shakespeare’s tale of ambitious machinations in a punk world of black and white the set backdrop resembled a series of handsome pen-and-ink drawings of church arches and royal palaces. The director’s addition of a chorus of (largely) female figures also added to the play’s resonance.

Jonathan Sousa’s Richard seems uninvolved in his character’s actions for most of the play’s first half, though in the second – once the plotter has reached his goal, the throne of England – he shows more variety of emotion in trying to hold onto his prize. Maybe this is Madoc-Jones’s choice, but we miss seeing Richard’s delight in his successful scheming.

Even so, Sousa creates sparks with a few of the other actors, beginning with Taryn Jorgensen as Lady Anne, whom Richard woos (and wins) over the corpse of her husband, killed by Richard.

There’s also good work by Amelia Sargisson as Elizabeth, Richard’s sister-in-law and wife of King Edward (James McDonald, also giving a strong performance). The verbal tussle between Elizabeth and Richard in the second act, which mirrors that between Anne and Richard in the first, is one of the production’s best moments. Sargisson knows how to handle the language and also create a character with sure strokes.

As Buckingham, Richard’s lieutenant, who’s eventually betrayed by his master, David Coomber proves to be another admirable actor, offering a clarity of language, a nice sense of theatricality and a subtle range of emotions. Wonder what the production would have been like if he’d played Richard.

Over at George Brown, director Newton sets Love’s Labour’s Lost in Rio during carnival, creating more pressure for the four central men, led by the King of Navarre, who withdraw from the pleasures of the world. The set, with its complement of hanging tropical leaves, is by William Schmuck.

Shakespeare’s comedy is full of wit involving English and Latin, much of which doesn’t work for today’s audiences. We’re not unhappy, then, that Newton has pruned the text and focused on the quartet of lovers, young people passionately caught up with the opposite sex. One of the strengths of the production is the way it captures the freshness and impetuosity of the youthful characters.

Again, communicating the poetic language and the relationships between characters is key. As the main couple, Berowne and Rosaline, James Pettitt and Tal Gottfried know how to present arguments and bandy words with each other in a theatrical yet believable fashion.

The performer who stands out is Andy Trithardt as Boyet, servant to the Princess of France (Katherine Barrell, who has a strong scene near the play’s end). Natural in handling the text and the emotions that go with it, Trithardt’s an actor to watch.

Toronto writer/director Beatriz Pizano, artistic director of Aluna Theatre, is one of the two recipients of this year’s John Hirsch Prize, a cash prize given to emerging professional theatre directors.

The other winner is Quebec City’s Christian Lapointe.

Aluna recently completed a run of Pizano’s La Comunión, the third in her trilogy about life in contemporary Colombia, racked by ongoing conflict. The company’s work focuses on Latin-Canadian and women artists.

Pizano’s actually a triple threat, since she’s also fine, heartfelt actor. In the fall she appeared in Alameda Theatre’s The Refugee Hotel.

She’s one of the key theatre artists developing Latin-Canadian stories for local audiences, and we’re lucky to have her working in our city. Congrats.

She’s the focus of the Canadian Opera Company’s annual fundraiser, Operanation 6, Habanera, to be held February 26 at the Four Seasons Centre for the Performing Arts, where a production of the opera runs through February 27.

The audience is encouraged to explore their inner Carmen. They’ll be helped by open bars serving mojitos, a DJ, Latin dancers, tapas and a paella bar.

There’ll be entertainment by mezzo Lauren Segal singing Carmen’s sensual Habanera aria, tarot readings and an interactive performance by one of our fave theatre/comedy troupes, the National Theatre of the World, who will offer their own manically twisted version of the opera.

Funds raised benefit the COC and its education and outreach programs.

Sing out this SummerWorks

SummerWorks, always looking for ways to expand its mandate, has a new component in its music series.

Two evenings in the annual festival, August 8 and 9, will be devoted to showcasing new pieces by artists working with musical theatre in a concert format.

Producers hope for applications from artists in both conventional and unconventional models. The only requirements are that the work must have both live musical and dramatic elements and that it’s never been produced. They’re encouraging theatre artists and composers as well as indie musicians, dancers, video artists and others.

Submissions should be a minimum of 40 minutes. You can submit full-length works of one or two acts or a completed first act of an unfinished piece.

Deadline is March 1. For more information and an application form, see summerworks.ca.