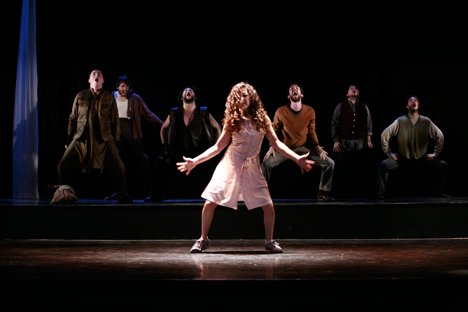 Ever wonder what life might have been like in ancient Alexandria, a city in which various cultures lived side by side?

The idea has inspired Unfinished Passage, a work by the theatre performance program at Humber College. The troupe makes a rare appearance downtown, playing at the Imperial Oil Opera Theatre on Front Street East.

For the past two years, students have been working with performance artists Alex Fallis, Fides Krucker and Heidi Strauss on creating a piece that looks at Alexandria as a multicultural city, one layered with events and personal histories that carry the city’s residents on a never-?ending journey through time.

Given the diversity of the mentors – theatre, music and dance – it’s no surprise that the result is a multidisciplinary piece. It has roots in Egyptian pop music, traditional Central Asian dance, Greek tragedy, rock and roll and the actors’ own family stories.

APPLY YOURSELF An occasional feature highlighting calls for artists and submissions for various programs and festivals.

The next Canadian Stage Festival of Ideas & Creation runs May 10 to 22, and festival director Natasha Mytnowych has put out a call for artistic submissions. The festival features public readings and workshops of new works by established and emerging artists from Canada and abroad.

Nightwood has two calls. The first is for its Emerging Actor Program, which brings together recent male and female grads from theatre schools to hone their skills in play development and gives them a chance to work with established professionals. The young artists work in tandem with members of Nightwood’s Write From The Hip novice playwriting program.

Sessions begin in April. All participants will be cast in at least one Write From The Hip reading, for which they will receive an honorarium, and be involved in other Nightwood workshops.

The company is also looking for young women aged 12 to 16 to be part of Busting Out, a forum that allows participants, through theatre-?based workshops, discussion and collective creation, to develop a piece that they’ll present publicly in August.

The festival, now in its fifth year, runs June 3 to 6. Organizers are looking for four full-?length productions, each running a maximum of 60 minutes. All forms and styles of clown and physical theatre are eligible. The festival is not geared to children.

The Tarragon is soliciting scripts for its second Under 30 Playwriting Competition. The winner receives $3,000 and a chance to participate in the theatre’s annual play reading week.

The playwright must be under 30, a Canadian citizen or permanent resident and can submit only one play. Plays must be in English and a minimum of 80 minutes new plays that have received a workshop or reading but not been produced are eligible.

The guild is seeking plays from those who are currently enrolled in post-?secondary studies and are Canadian citizens or have permanent resident status. Scripts must be primarily in English, between 70 and 120 minutes in length and an original work or adaptation but not a translation.