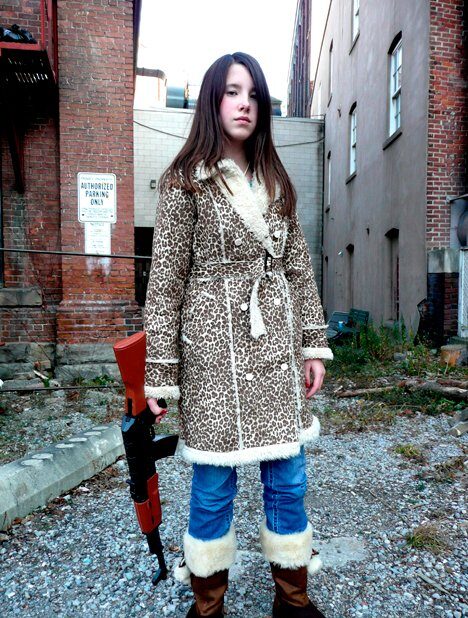 From the show Insurgency

You can never predict what you’ll get at Rhubarb, Buddies in Bad Times’ annual festival of contemporary performance. The shows are sometimes sweet, sometimes tart, but every one of them pushes the live-performance envelope.

Under festival director Erika Hennebury, this year’s 31st annual Rhubarb (which closed February 28) was typically eclectic. We caught about half the productions during the festival’s three weeks.

Highlights of the first week included Zack Russell’s eclectic Parole, Parole, a combination vaudeville show and personal drama, featuring a nuanced performance by Carmen Grant. In Birdtown and Swanville’s send-up of pro wrestling, Deadwrestlers, an all-female cast bounced around the Chamber with megawatt energy. Writer/performers David Tomlinson and Ryan Kelly generated their own unique chemistry as musician/friends in Cordelia.

The following week, Jeremy Bailey brought a low-key, stand-up feel to The Future Of Theatre, a lecture-and-computer presentation that allowed audience members to create background and characters for the stage.

Bailey talked – we hope tongue-in-cheek – about new media taking over from live performers, but the next show we saw, Jordan Tannahill’s Insurgency, put the lie to that idea. Tannahill’s cast of five young performers delivered live monologues about community and family, while a video of the five in various revolutionary situations played as a backdrop. The video focused on guerrilla activities and the actors’ haunting faces as they explored a new world. How exciting to see the energy and drive of people considered by most adults to be apathetic and self-involved. Develop this piece, please.

Anyone worrying about the imminent demise of live performance need only spend some time with d’bi.young to see how ridiculous the idea is. Young workshopped she to a delighted audience who sat all around her. Unravelling a scroll of stories as she told tales that changed style and presentation format (some sung, some spoken), young knows how to use rhythm, ritual and text to hold her listeners.

She populates her world with lots of succinctly drawn characters, one of whom wonders if she has the potential to be the next big thing. There’s no question that young, who always asks for audience feedback in a workshop like this, is already there.

The third week included a sometimes clever po-mo piece, Don’t Dream With The Lights On, created by Lindsey Clark, Hannah Cheeseman, Susanna Fournier, Eleanor Hewlings, director Rose Plotek and Katie Swift. Its highlight was a three-way exchange involving Clark, Hewlings and Swift, in which the trio shared words and thoughts, seeming at times to be a single character.

Probably the most conventional work in the festival was Shannon Blake’s Factory, in which an old widow and young lesbian sit by the side of a lake deciding whether or not to take a swim. The narrative could use more development, but under Megan Watson’s direction, Dana Rogers as the lesbian and Sandi Ross as the old woman mined the writing in a fascinating way. Ross brought grace, warmth and a strong presence to the elder character, who lost her husband to the factory that consumed his life in several senses she talks about their relationship as a triangle, with the factory as the other woman who stole him away.

Finally, New York artist Karen Bernard worked wonders with a computer, projections and live performance in Ouette / (o’et), based on the François Ozon film Swimming Pool. Interacting with the projections, creating characters out of silhouette and shadow, Bernard plays with reality and fantasy to create figures caught up with seduction and anxiety.

Performing pop and show tunes usually sung by women, the engaging Atkins offers a take on the queer male fascination with everything feminine.

Laughing because it hurts

This week, as part of a symposium on therapeutic clowning held by the Miles Nadal JCC and the Canada-Israel Cultural Foundation in partnership with the Therapeutic Clown Program at Sick Kids Hospital and the Baycrest Centre, Toronto audiences can catch an example of Israeli clowning.