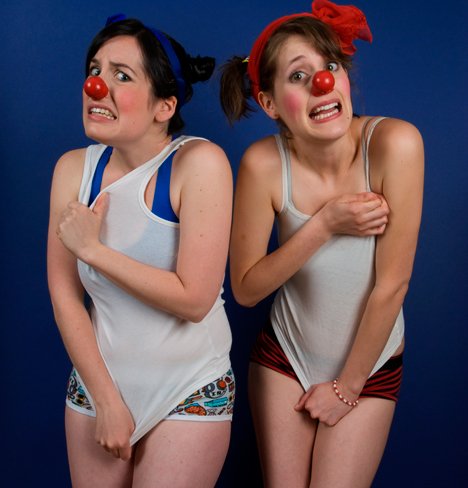 Morro And Jasp Do Puberty

Just as people grow up, so do clowns.

When we first saw clown duo Morro (Heather Marie Annis) and Jasp (Amy Lee), they were delighting young audiences with shows about getting along and learning to be green.

“While we loved performing for kids, there came a time when we realized Morro and Jasp were starting to mature,” recalls Lee, “and we wanted to respect that and grow with them. That meant creating a show for grown-ups, one in which we didn’t have to censor ourselves.

The result is Morro And Jasp Do Puberty, a Fringe hit that the team of Up Your Nose and In Your Toes Productions – which includes director Byron Laviolette – revives for a week at the Theatre Passe Muraille Backspace.

We gave the Fringe show a 5-N rating, and we expect the remount to be just as good.

The show draws on Lee and Annis’s own pubescent experiences, though exaggerated and seen from a clown perspective.

“The material ranges from having your first period and feeling that you have to hide your underwear to shaving for the first time,” says Annis.

“There’s nothing we’re shy to talk about.”

The women in the audience can identify with the material, but what about the reaction of the guys?

“Some men told us how much they learned from the show,” smiles Lee, “and they find it enjoyable and funny even if they can’t relate to it in the same way as women.”

“But there’s also the universal awkwardness of growing up,” adds Annis, “the difficulty of interacting with others when you’re feeling insecure about yourself, that’s familiar to everyone.”

The show premiered in 2008 in Winnipeg, Lee’s home town, and she was a little nervous that her grandmother was in the audience.

“But she loved it, and so did my partner’s 86-year-old grandmother. She found it a really liberating show, because in her day you couldn’t talk about things like periods and sexual desires.”

Clowns, of course, can deal with difficult material in a humorous fashion, one that combines the gross, the comic and the celebratory.

“The style is a traditional way of addressing topics most people don’t want to talk about,” notes Annis. “And after all, there’s no point in ignoring bodily changes that happen to more than half the population.”

If you caught Praxis Theatre’s 2009 Fringe show Tim Buck 2, you know the company is drawn to political theatre and involving the audience in its presentations.

The latest HATCH workshop at Harbourfront is Praxis’s Section 98. The show builds on Communist Party leader Buck’s imprisonment in the 1930s and adds other episodes about past and present Canadian civil liberties issues.

In addition to a section on the 70s FLQ activists in Montreal, the company’s exploring the recent testimonies on the Canadian mission in Afghanistan and the curtailment of civil rights during the Vancouver Olympics.

Audience input is part of the script’s development process. A Q&A with the performers follows the workshop performance.

Want to see the first stage of some new scripts?

In its fourth year, the WriteNOW! Festival of New Works offers a curated quartet of premiering plays organized by pivotal(arts).

“We began the company four years ago when we graduated from the University of Guelph,” says artistic producer Jennifer De Lucia, who now runs the group with co-producer Deanna Palazzo and artistic director Shawn Douglas Murphy.

The company presented A Crack In The Ceiling, developed in an earlier WriteNOW!, at last year’s Fringe.

This year’s festival includes three scripted pieces and a collective creation, all at an early stage of development.

“Daniel J. Karpenchuk’s Crime Scene is a noirish piece in which a woman tries to unravel the truth about her partner’s death,” notes De Lucia, “while Graeme Gerrard’s Dating Yourself is about finding a partner in the queer community. Kevin Morris’s The Four Minute Mile looks at love, loss and self-absorption.”

The collective creation, Up In The Clouds, takes as its inspiration the theme of transition.

Soulpepper Theatre begins a new lab series in which audiences have a chance to see an early stage of the creative process. Sometimes that process is the development of a new script sometimes it’s actors taking on new material.

First up is an adaptation of Jorge Luis Borges’s short story The Aleph, in which a man’s dedication to his dead beloved leads to his discovery of the Aleph, a point in space that contains within itself all of existence.

The creators – including actor/writer Diego Matamoros, director Daniel Brooks and designer Michael Levine – should give this esoteric tale a particularly strong reading.

The other two works in the lab series involve members of the Soulpepper Academy (see the preview on Oh What A Lovely War). In July, they and director Brooks present a workshop of Chekhov’s The Cherry Orchard, and in August they work with director Laszlo Marton on a new work called Window On Toronto.