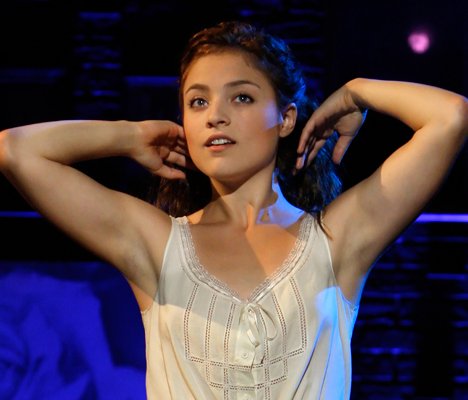 If there were ever a tipping point for a Broadway musical’s popularity, an extended storyline on a series like the new 90210 would be it.

That’s what happened last fall when the kids on the hot teen TV show mounted their own version of Spring Awakening.

“So many things were different, but if you were to do a high school performance of the show, that is exactly how it would be,” says Christy Altomare, who plays lead Wendla in the pop/rock take on Frank Wedekind’s century-old expressionist drama about a group of teens’ sexual coming-of-age.

Like a lot of the cast, Altomare’s young enough to be believable as a teen – plus she’s a trained musician. (Check out her impressive EP at christyaltomare.com.) She counts Jewel and especially Joni Mitchell as her biggest influences, and wrote and recorded her first CD at age 13.

“I think the words ‘I love you’ showed up a thousand times in the lyrics,” she laughs on the phone from the show’s Cleveland stop. “But it gave me the passion I have today.”

That passion – and the sweet purity of her voice – is obviously what got her the juicy part of Wendla. But she’s also pretty brainy. She points out that her character is less a victim than she was in the original, and a few seconds later mentions the Brechtian devices that composer Duncan Sheik and writer Steven Sater employ in the work.

“In most musicals, someone sings a song because they’re so moved they have to express what they’re feeling in song,” she says. “It also advances the plot. But in this show, when someone sings it’s not their character who’s singing – it’s the performer. I’m not Wendla, I’m Christy at 14 singing about a situation that happens in the show. And it comments on what’s going on in the show.”

Not exactly the kind of role she was trained to perform in college, where she studied more traditional musicals.

“I have a soft spot for Rodgers and Hammerstein shows,” she admits. “They’re beautiful in their own way. But what makes me excited about Spring Awakening is that it leaves the door open for new art forms and creativity on the Broadway stage instead of remaking the same thing you’d see in the 1950s.

“You could hear any of these songs on the radio today and you wouldn’t think it’s weird.”

On whether the adaptation still pushes buttons:

On getting to some heavy emotional places each performance:

On surviving the road: