NOW MagazineCultureStageStars: Together is a curious, cathartic look at band life

Stars: Together is a curious, cathartic look at band life

Canadian indie act makes good on their dramatic rep with an unpredictable stage play that blends jubilant performances with humour, emotion and plenty of meta-commentary 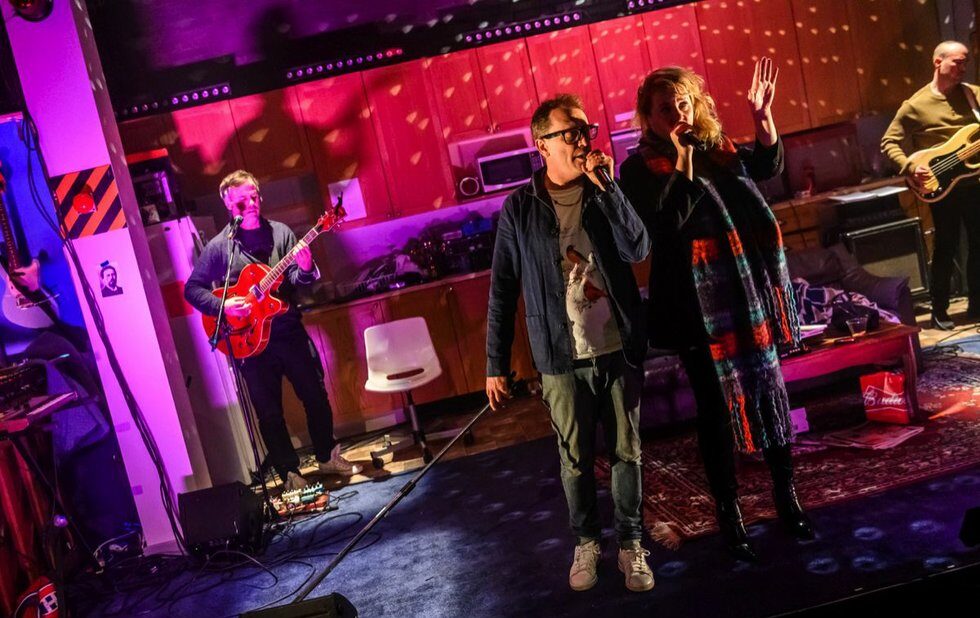 After two full decades of being incessantly hailed as the most theatrical band in Canadian rock, indie sextet Stars have finally booked a theatre, built a set and printed some programs.

True to its billing as a “mock rock doc” – “only in Toronto would someone come up with that catchphrase,” singer Torquil Campbell remarks early in the show – Stars: Together translates the kitchen-sink approach of a music documentary to the stage, with a heartily surreal and self-referential bent.

Co-created by Chris Abraham (who also collaborated with Campbell on his solo show True Crime in 2017) and Zack Russell, the play does away with the linear salad-days-to-seasoned-vets narrative you might expect neither does it fall prey to the jukebox-musical treatment.

The show is shot through with jubilant, expansive performances that perfectly illuminate the band’s lasting appeal as a live act and lend emotional heft to the scenes between songs. Musically, the show pulls largely from the mid-period of the band’s catalogue, with a smattering of tracks from No One Is Lost and In Our Bedroom After The War (2001 kids holding out for Elevator Love Letter or Your Ex-Lover Is Dead will just have to come back for the next club show).

The narrative arc of Stars: Together consists of vignettes that, we come to learn, encapsulate dynamics that repeat themselves throughout the band’s existence. Campbell and drummer Pat McGee are fighting bitterly, singer Amy Millan’s trying to hold things together, bassist Evan Cranley is either losing his memory or stuck in some kind of time loop and keyboardist Chris Seligman is insulating himself in music, trying to chase a peculiar light emanating from deep within the practice space.

The play straddles the fourth wall, with the members frequently taking sidebars to address the audience, or slapping on an extra layer of meta-narrative by commenting on the behind-the-scenes difficulties of putting the show together. Stories, set pieces and formats overlap, further obfuscating what’s real, what’s embellished, what’s scripted and what’s off-the-cuff.

The show wears its seams proudly, and when this approach works, it’s disarming, charming and hilarious (a few gags about the less-loquacious members of the band needing to be fed their lines are pitch perfect). But it can get a little disorienting – particularly early on in the show, when the audience and band haven’t quite settled into a rhythm.

Millan and Campbell, who drive the band’s swoony, hyper-literate appeal, are unsurprisingly right at home here. Campbell (the instigator behind the whole production, as the script makes abundantly clear) plays himself – mercurial, idealistic, prone to pontificating, wound tight like a pack of D’Addarios – with a layer of self-parody just thin enough to find the humour and pathos in his own tempestuousness. Millan, meanwhile, is a warm, open presence who acts as a bridge between audience and band as well as between Stars’ members.

I’ve heard musicians say that being in a band is like dating everybody in it at once. Some scenes in Stars: Together – like Seligman and guitarist Chris McCarron sitting in the van, staring blankly into the middle distance while their bandmates scream out their frustrations for the nth time – will be painfully familiar to veterans of the road. Still others, like an exquisite rant from one of the band’s longest-suffering members three-quarters of the way through the show, are deliciously cathartic.

Ken MacKenzie’s set design, no doubt, will also strike a familiar chord. The recreation of Mount Zoomer (a legendary Montreal studio and rehearsal space that, notably, gave its name to a Wolf Parade record) is all Home Hardware shelf brackets and janky second-hand leather sofas – but stage lights are woven throughout, ready to spring dazzlingly to life as Millan or Campbell grabs the mic.

Less successful is the inclusion of two life-size humanoid puppets jerry-rigged out of what appear to be keyboard and microphone stands, with blank, masklike faces ready for projection (literally and figuratively). Sometimes they add neat visual texture mainly, they just stand out for the wrong reasons. (McCarron offhandedly refers to “making these terrifying puppets” during a monologue, so at least they give us the out there.)

Between its free-flowing pacing and the occasional dissonant note in the script, the show isn’t always a bump-free ride – but it’s genuinely spirited, affecting and filled with impressively vulnerable truths about what Stars’ members have sacrificed along the way to keep the band together.

By the finale, when Campbell commands the audience out of their seats for one last dance party, it feels like a hard-won victory.