Stage Scenes: The key to Campbell

Plus, Red One gets dangerous 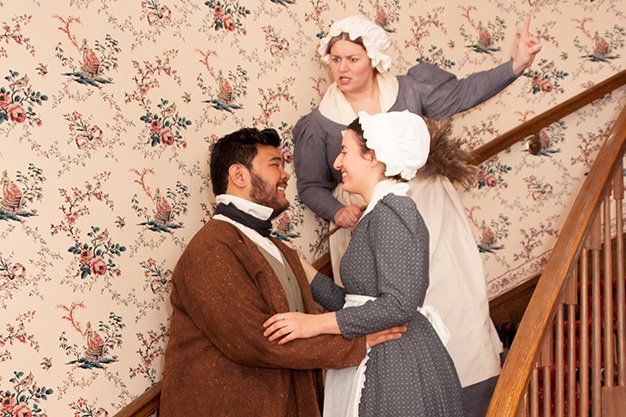 The key to Campbell

Thanks to the efforts of curator Liz Driver, Campbell House Museum has been more than a site of Toronto history she’s booked in classic and contemporary plays as well as premieres by indie companies.

Until this past weekend, though, the house has never hosted an opera.

Co-produced with the U of T’s faculty of music, Footsteps In Campbell House is the latest presentation by the Student Composer Project, which gives budding composers a chance to write operatic scenes and have them publicly staged.

Director Michael Patrick Albano’s libretto traces the history of William Campbell, chief justice of Upper Canada, who built the house – originally farther south, before it was moved in 1972 to its current location at Queen and University – and lived in it in his last years.

The story’s frame was perfect for the venue: a tour guide (Danika Loren) introduces the building and is about to start a walkabout through it when Campbell (Nicolas Borg) comes down the circular staircase on his way to a dinner given by his wife, Hannah (Gwenna Fairchild-Taylor). We’re then swept back to the 1830s and view, as invisible spectators, the dinner, a ballroom dance, Campbell’s death and the mourning of his widow and friends.

But this is also an Upstairs, Downstairs tale involving not just the privileged few who live in and visit the house but also the servants, notably parlour maid Sarah (Alessia Naccarato) and groom Harry (Charles Sy), whose courtship, much to the disapproval of housekeeper Mrs. Baggett (Christina Bell), is central to the narrative.

The audience does indeed get a tour, the action taking place sequentially in five of the rooms. Albano stages a number of attractive tableaux, notably one in the dining room where we enter to the smell of oranges and dried fruit, the post-dinner course.

The music is pleasant and lightly scored, the highlights being Tse’s choral hymn following Campbell’s death and Denenberg’s use of Home, Sweet Home near the end of the short work. Fairchild-Taylor brings heartfelt sadness to a lyrical aria of mourning, while Naccarato and Sy’s wooing scenes sparkle.

Occasionally, though, some of the young performers sing with a stentorian fervour that needs scaling down. The show takes place in a period Georgian house with the audience standing around the artists, not across the street in the Four Seasons Centre.

Red One gets Dangerous

You’d be hard pressed to find a play more cold and sensuous than Dangerous Liaisons, Christopher Hampton’s adaptation of an 18th century French novel in which the two hedonistic central characters, the Vicomte de Valmont and the Marquise de Merteuil, use sex to manipulate and control others in their upper-class world.

Red One Theatre Collective stages that fascinating text, with Daniel Briere and Claire Burns in the key roles. Other returning company members include Karen Knox, Caroline Toal and Brenhan McKibben.

Why are we looking forward to the production? The company’s on a roll after the fall’s outstanding stagings of The Skriker and Who’s Afraid of Virginia Woolf? And we haven’t forgotten the sexy, perilous heat generated by last year’s After Miss Julie.

It’s also a chance to see the directing of Jakob Ehman, who’s done some fine – and Dora-nominated – work as an actor with Red One and elsewhere. His take on the material weds a period concept with contemporary rock music composed and played live by Jason O’Brien.

The production begins Wednesday (February 11) at the Storefront Theatre.

Director Luke Brown imposed an Occupy movement theme on the show, which worked well for some scenes: seeing Jesus “whipped” by club-wielding police in riot gear, for instance, and having the priests played by greedy Bay Street suits. But the character of Mary Magdalene didn’t make sense, and of course the religious references in the second half didn’t resonate with the conceit.

Anthony Bastianon’s musical direction – the band played right on stage – added lots of energy, befitting a musical that began as a concept album.

And the production’s design (sets by Laura Gardner, costumes by Sara Bryzozowski, lighting by George Quan)  was airy and efficient, scaffolding and a central staircase leading up to a door used very effectively.

There was also some fine talent on display. Harold Lumilan showed off mad vocal skills as Simon, Mark Gallagher and Matthew Fuller were drolly amusing as Annas and Caiaphas, and Jeremy Hutton made a genial, sympathetic Pilate.

And the show lived up to the word “superstar” in David Michael Moote’s charismatic, focused Jesus – his Gethsemane was absolutely rivetting – and Aaron Williams’s raw, visceral and emotionally conflicted Judas.

For the rest of Hart House’s season, see harthouse.ca