Plus, The Paprika Festival and Soulpepper launches its first Family Fest 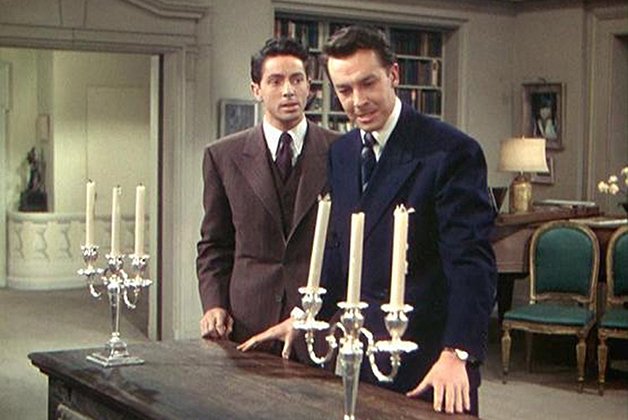 Patrick Hamilton’s 1929 play Rope isn’t a whodunit but rather a can-they-get-away-with-it.

At its centre are a pair of privileged young intellectuals, Brandon Wyndham (Leete Stetson) and James Kelly (Nicholas Arnold), who strangle fellow student Ronald Kentley simply for the thrill of it, stuff his body in a trunk in Wyndham’s living room and invite a group of people, including the dead man’s father (Ian McGarrett), for a meal served on the trunk.

Wyndham has a specific purpose for the rope he’s used for the murder, which he intends as yet another way of thumbing his nose at his guests.

The murder is Wyndham’s smug way of showing off his cleverness by committing the perfect crime he admires Nietzsche’s theory of the amoral superman who can do whatever he wants. Kelly is merely his follower, and a nervous one at that. But they don’t count on some equally smart deductive work by another friend, the tart, ironic poet Rupert Cadell (Jamieson Child), whom Wyndham initially considered making part of their plot.

The script gets some of its flavour from Wyndham’s ironic, needling remarks about Kentley during the party, comments that mean nothing to the others there but are suggestive for the aware audience.

The story’s best known in its film adaptation by Alfred Hitchcock, but there’s some point in seeing the theatrical original, especially in Bygone Theatre’s site-specific staging at North York’s Gibson House Museum.

The small audience, seated in the house’s front parlour, watches the action a few feet away in the connecting room, the trunk between characters and viewers. Hamilton makes it the frequent focus of conversation so we never forget the game Wyndham is playing.

Under director and costume designer Emily Dix, the visual details, including millinery by David Dunkley, are generally understated but impressive. She’s also given the action a local flavour with mentions of Upper Canada College, Yonge Street and Rosedale. Most importantly, she generally keeps the tension taut: will someone discover what’s in the trunk?

Some of the performers stand out, notably in the final battle between Wyndham and Cadell Stetson brings an increasingly frenetic fervour to the murderer that nicely balances Child’s cold, analytical surmises. Unfortunately, Arnold’s Kelly isn’t enough of a presence, his qualities defined at the start of the show without any development as the action proceeds.

Matthew McGrath has charm as another party guest, while Chelsey MacLean adds a touch of flapper raciness to the production.

The Paprika Festival, which fosters the work and development of young stage artists, runs in May at the Theatre Centre.

The fest, which is anything but trivial, holds a trivia night fundraiser Wednesday (December 3) at the Duke of York. Team sign-ups are encouraged.

The evening, whose admission price includes a print of draft and snacks, also celebrates the artists recently accepted into the 14th annual Paprika Festival.

With December and the holidays almost upon us, Soulpepper launches its first Family Festival.