Don’t let that fragile exterior fool you. In plays like The Mill and The Russian Play, Michelle Monteith has shown she’s an ingenue with an iron core. Now she’s ready to take on one of the most controversial plays of the past two decades 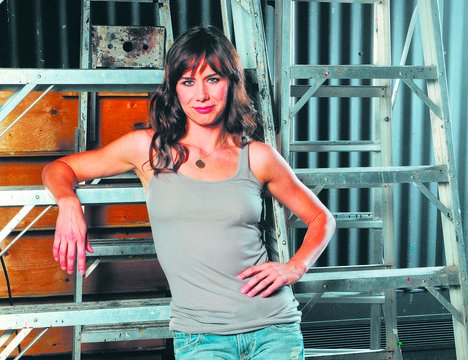 As theatregoers know, Michelle Monteith is electric onstage, exuding a girlish innocence – there really is no other word for it – with a tough core. If you haven’t seen her in recent shows like Waiting For The Parade or The Mill, imagine Amy Adams crossed with Amy Ryan to get some idea of her range.

So I’m a little taken aback when I meet her in person. She’s not timid or self-effacing, exactly, but she doesn’t seem comfortable. We’ve never met before, and I’m at an advantage, having seen her more times than she’s seen me.

“What you don’t realize is that I was a very, very, very, very shy person growing up,” says Monteith (no relation to Glee’s Cory, although both grew up in BC), settling in behind a Buddies in Bad Times boardroom table after a gruelling rehearsal of the company’s season opener, Blasted.

“The thing about shy people is that they might want or need to do something, but they do it quietly and in their own way.” She pauses, trying to find the right words. “In high school, I had to choose between drama and music. Drama felt safer. It can somehow feel safe to live through someone’s else’s words and experiences. I think that’s why a lot of actors do this. Because they’re shy.”

There’s still a bit of that nervousness – the sudden laugh, the stretch of silence to collect her thoughts, a slight formality to her diction. (“I endeavour to do that,” she says several times, instead of the more colloquial “I try.”)

Monteith, whose character Cate has a history of abuse and at one point simulates biting her partner, Ian’s, genitals, says she understands how some people could be disturbed by it.

“It shows us a part of ourselves that we don’t want people to see,” she says, excitedly extracting her copy of the script to show me a quotation from the playwright she’s scrawled in pen.

“Sarah Kane said, ‘I wrote Blasted to write the truth. Of course, that’s shocking. Take the glamour out of violence and it becomes utterly repulsive.’

“I love that, because it’s supposed to be disturbing. It’s supposed to show us how awful we can be to each other, and yet in spite of that there are still great acts of love. If an audience member takes the time and courage to identify with all the characters, I think you’ll find empathy, and I think any time you find empathy with someone, it can be frightening.”

This is the second Kane play Monteith’s done professionally. The first was Nightwood Theatre’s powerful production of Crave. Her character, C, like Blasted’s Cate, was also abused.

“Until Brendan [Healey, the play’s director] mentioned it, I didn’t realize that,” she says. “I don’t think Cate sees herself as a victim, whereas I think the character in Crave knew she had been victimized and was struggling with how she couldn’t move past that in her life. Cate knows that Ian has done things, but she doesn’t feel she’s been victimized.”

A couple of weeks before opening night, the scenes of overt violence aren’t the most challenging. She says she couldn’t have asked for a safer environment, and Healy and co-star David Ferry are constantly checking in with her to see if everything’s okay.

The biggest hurdle is a scene later on in the play when her character arrives and confronts Ian with a baby.

“On the page it seems like the simplest scene, but it’s been a big struggle. Nothing frightening occurs. But trying to capture the state and show what we’ve both been through and what that leaves us with is difficult. It’s been the trickiest road map to figure out: to find the motivation behind it and be truthful.”

Finding the truth in a character is key to Monteith, who over six or seven seasons, since moving east from Vancouver to join Bill Glassco’s Young Company, has triumphed in several roles that could so easily have descended into treacle: Laura in The Glass Menagerie the young girl who revisits her past in the Our Town-inspired play Revisited and, in her favourite experience to date, the dual parts of a frail woman betrayed in love and a hard-nosed narrator in The Russian Play.

“Everything stems from that,” she says about Hannah Moscovitch’s script, which was remounted several times. “It helped change how I saw myself and how people saw me as an actor. The role demanded parts of me I hadn’t had the chance to explore: the wry, fearless, no-bullshit side.”

Clearly, she channelled that fearlessness into her role in last season’s Waiting For The Parade, where she played a dissatisfied army wife who finds comfort elsewhere. And she’s not shy talking about her experience at Stratford, where she went in 2008.

“I went for the experience to soak up what was there, to work with some amazing directors,” she says. “I didn’t have a lot to do work-wise, and I knew that going in, but I tried to get as much as I could.”

She would have gone back, but the offer didn’t attract her as much as the more interesting work waiting in Toronto: like The Mill, and Theatrefront’s Ubuntu.

“I didn’t feel I was leaving Stratford having made an imprint that was significant enough that I knew I could come back,” she says. “But it was a good lesson, a defining moment. I was driven by artistic choices. That’s not to say I wouldn’t like to go back there again. But a very wise person said to me once, ‘This place disappoints everyone, so you’ve got to make your decision based on what’s in front of you now.'”

For now, she’s doing just fine. In early 2011, she debuts the final section of The Mill and reprises her roles in the three previous parts of the historical horror cycle. And she had to miss a few workshops of Blasted to head to Chester, Nova Scotia, to tape one of her first big TV roles, a recurring part in the Stephen King series Haven.

“I play Julia Carr, a young doctor who grew up in Haven but left because of the troubles and the bad things happening,” she says. “She returns, becomes friends with the main girl, who’s got some mysteries, and helps uncover them and her own involvement with what’s happened in the small town.”

The show airs on the Sci-Fi channel in the U.S. and on Showcase here. They haven’t had word yet about a second season, or whether she’ll be involved.

“My character didn’t die,” she says. “So that could be a good sign.”

On relating to Cate:

On how a course in university called Acting For Non-Actors changed her life:

On her Glass Menagerie experience (and getting some bad reviews):