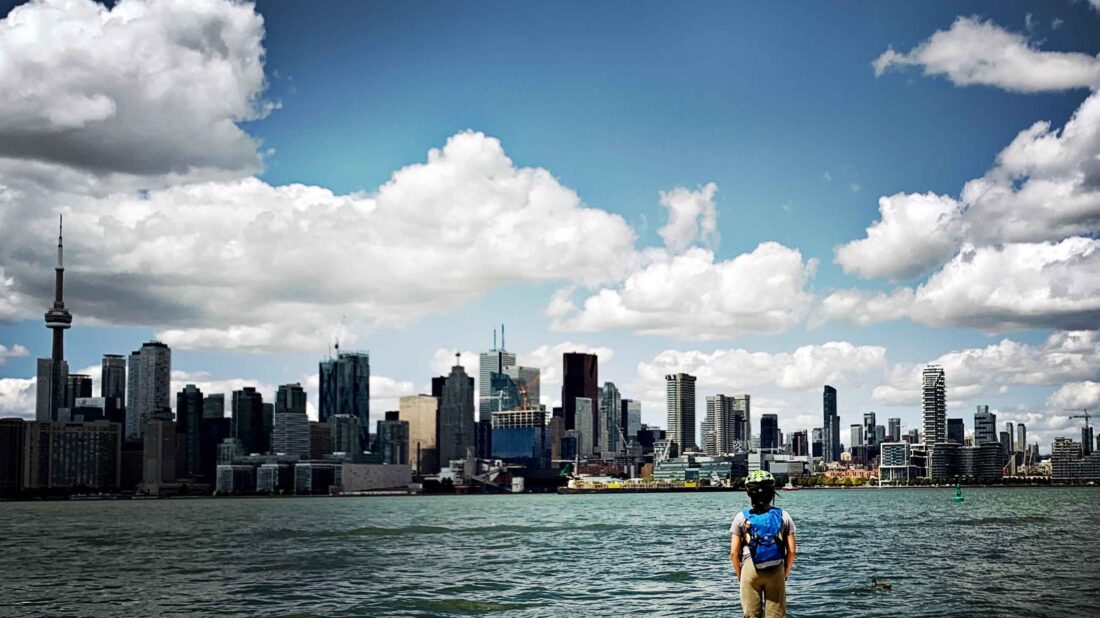 Eponine Lee's We Will Be: Rising as a Community looks at what our future might be like.

What will the world look like after the pandemic? It’s a question everyone is grappling with right now. As Daniele Bartolini and Luke Reece, the two curators of the anthology series We Were, We Are, We Will Be explain, the answer requires multiple voices and perspectives. 10, to be exact.

That’s the number of multidisciplinary pieces in this SummerWorks/Canadian Stage co-production that will take audiences from the past to the present and into the possible future.

“At first we had a list of 40, but then cut that down to 20, and finally we decided on 10,” says Reece, who helped develop and dramaturge the show with Bartolini, who conceived of the project. “So many of those other 30 could have been a part of this.”

10 is a nice number with literary precedents, says Bartolini, the artistic director of the immersive, site-specific theatre company DopoLavoro Teatrale. He points to Boccaccio’s The Decameron, a work about people gathering to tell stories during another pandemic and trying to somehow glimpse a different future for the world.

Reece, artistic producer at Obsidian Theatre and a renowned slam poet – he recently collaborated with Toronto Raptor Serge Ibaka on an Instagram Talent show – says there were some things they both knew they wanted.

“We wanted a Black and an Indigenous voice in each one of the time periods,” says Reece. “Not just because of what’s going on now, but because of the unique experiences of these people, especially in Canada. If we didn’t have those voices, there would be a big hole in representing the history of this country.”

There’s a multiplicity of disciplines involved.

Dance artist Esie Mensah, a frequent SummerWorks artist, has a piece teasingly titled Can You Trust Me?, a question on everyone’s mind when they see strangers. O’shane Howard is a photographer whose installation will help amplify the businesses of six Black entrepreneurs. Melody McKiver is an Anishinaabe composer whose audio landscape will be available for downloading while you walk, bike or rollerblade along a certain stretch of Toronto waterfront.

When Bartolini and Reece approached the artists to ask if they’d contribute, they were overwhelmed at the reactions.

“So many of them were hungry to create and put something out there,” says Reece. “Some hadn’t had the opportunity to make something in four or five months. And we were giving them the chance to play and explore.”

Deaf performing artist Chris Dodd was eager to work with the idea of masks in his piece Please Remain Behind The Shield.

“Chris reads lips to understand people, and masks create a barrier to that,” says Reece. “It’s armour that both protects and separates us.”

Depending on what section they’re in – past, present or future – artists were given technical parameters.

“Artists in the past had to present digital works,” explains Bartolini. “We wanted audiences to be able to experience these things from the comfort of their home.

“Artists in the present are presenting site-specific works around the city,” he continues. “The site they chose was almost as important as the piece itself. For instance, poet Jennifer Alicia is presenting her piece Cyclic Dystopia at the stage in High Park that Canadian Stage normally uses for its Shakespeare productions. Now there’s an Indigenous voice there.

“And artists working with the future have to find some sort of physical engagement – at a distance – with the audience.”

In a way, the progression from past to present mirrors the way audiences are gradually working themselves back to normal. They will go from looking at screens to venturing out after into the world, meeting others not in their pandemic bubbles.

Bartolini has presented many shows with SummerWorks. Reece took the festival’s artistic leadership intensive program seven years ago and says many of the artists he studied with then have become colleagues.

This is the pair’s first collaboration, but it won’t be their last. Reece says it was a great creative partnership at first sight.

“We created a producing name called Mixtape Curations. That’s the perfect name. You put all these things together and make something for someone else. It’s an offering, like this show.”

We Were, We Are, We Will Be runs August 18 to 23 at various locations. Free (advance registration required). summerworks.ca.