NOW MagazineCultureStageWhat’s a Jewish artist to do?

What’s a Jewish artist to do? 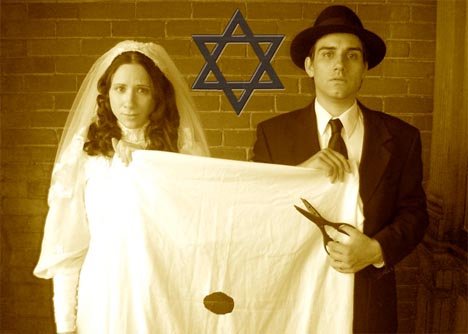 The saga of Theatre Passe Muraille’s production of Yichud makes me wonder, what does a Jewish artist have to do to get some creative space in this city?

Start by staying away from the subject of Israel and Palestine, as the producers of Caryl Churchill’s play Seven Jewish Children discovered when B’nai Brith tried to shut it down. And even if your subject isn’t the Middle East, as was Reena Katz’s Each Hand As They Are Called at Luminato, don’t have any personal history of criticizing Israel or your sponsors might pull out, as did the Koffler Gallery.

Now the Harold Green Jewish Theatre has withdrawn its support from Yichud, a play about an Orthodox Jewish couple set to wed through an arranged marriage. The piece was supposed to hit the stage in partnership with Passe Muraille and Convergence Theatre, where playwright Julie Tepperman is co-artistic director with play director Aaron Willis. Apparently, the script fell into the hands of a major funder, who convinced the theatre’s powers that be that “the material might be misconstrued.”

The decision created a $50,000 shortfall . Miraculously, Theatre Passe Muraille’s artistic director Andy McKim was able to raise $40,000 in the wake of the decision, so the show will go on. But come on, the artistic chill that’s set in to the Jewish community is turning positively frigid.

My repeated requests for an interview with someone from the Harold Green Jewish Theatre have been rebuffed, so I can’t tell you exactly what in the play is causing concern. It could be that the way it deals with sexual material is too explicit and could offend Orthodox Jews who don’t want to mess with their image of spiritual and sexual purity. Note that Convergence made a point of consulting with Orthodox Jews to ensure the play’s authenticity, so some Orthodox Jews out there can definitely imagine people in their community having a sexual conversation.

But I have two huge problems here. First, Jewish organizations have to stop saying yes to an artist and then saying no after the work has been done. Katz worked for a year and a half on her show before Koffler’s machinations led to a domino effect which made it impossible for her complete the work before her Luminato deadline. And HGJT made their decision just seven weeks before the show was slated to open.

Second – and I don’t want to give too much away here – Yichud isn’t even a trash of arranged marriage. So what gives? At this rate the Harold Green Jewish Theatre can look forward to a few productions of the propagandist musical Milk And Honey and maybe Neil SImon’sThe Sunshine Boys. But they’ll probably want to avoid Simon’s The Odd Couple, though, because Oscar’s a bit of slob and we wouldn’t people to think Jews can be messy, do we?

But if Jewish artistic institutions narrow their vision in such a way that Jewish artists cannot produce thoughtful work probing the situation in Israel or in Orthodox Jewish homes or anywhere inside the Jewish community, exactly what kind of art do they think is going to get produced. And do the folks at Harold Green really think that, after this debacle, Jewish playwrights who matter will even consider affiliating with the theatre?

Passe Muraille’s fundraising efforts have salvaged the production of Yichud but the show still lost a crucial week of rehearsal. That week can be saved, if fundraising efforts continue. If you want to make a tax deductible donation go to www.artsboxoffice.ca.[rssbreak]