THE NEXT STAGE A festival of new works and remounts presented in rep by the Fringe of Toronto at Factory. 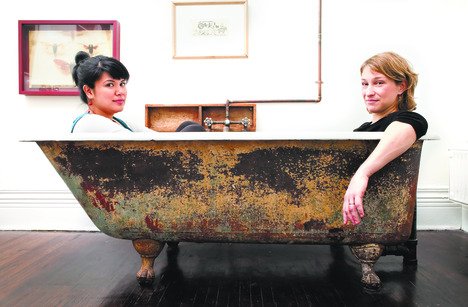 At some point, we all become our parents. That’s a lesson learned by Anne, the central figure in Tessa King’s Buried, as she deals with her mother’s funeral, her father’s Alzheimer’s and her sister, Rachel’s, return from Australia.[rssbreak]

More reason to stress? Anne’s mother returns to haunt her in this play rich in magic realism and dark comedy.

“Early in her life, Anne aligned herself with her mother, the family’s anchor,” says actor Christine Brubaker. “Her father was often away at work, and Anne learned from her mother to keep the status quo in the household.

“That means you don’t talk about problems but, rather, get through tough situations by ignoring them and not feeling what’s going on around you. That’s how you avoid the disappointments in life, by protecting yourself from the world.”

Brubaker relishes getting into a role that focuses on hidden material.

“The title of the play is a great metaphor for what Anne won’t look at. It allows me as an actor to explore Anne’s need to resist or avoid people who feel too much, because their emotions uncover too much discomfort.”

That’s just what Rachel does, wanting to discuss her feelings and changes in the family.

“It’s not just emotionally that the two siblings are so different,” notes Brubaker, who teaches at Humber College and is soon off to the Olympics to repeat her performance in Fear Of Flight. “Anne stayed home with her parents, while Rachel chose to live her own life at the other end of the world.

“But because Anne buries her worries, including the fact that she doesn’t have a husband or children herself, her mother keeps showing up. Anne literally can’t keep the coffin lid shut.”

A mother of two, Brubaker was drawn to the play because of the truth of its family relationships. She understands the difficulty of accepting the fact that we step into our parents’ shoes, much as we fight it.

“I’m still gobsmackingly shocked to hear my parents’ words or impulses come out of my mouth when I’m dealing with my own children.”

Inspired by the 2004 police shooting of 17-year-old Jeffrey Reodica, Marie Beath Badian’s The Making Of St. Jerome questions what happens when a person becomes a cause.

But at its heart, the play is about brotherly love.

Moving back and forth in time, the story follows the relationship between Filipino sibs Jason and the younger Jerome after Jerome’s death, Jason starts a popular website that follows his efforts to investigate what really happened that fatal night.

“I’ve been writing it for four years,” says Badian, an author, director and performer who’s workshopped the piece with fu-GEN and Roseneath Theatre.

“It’s a tender subject for me. There are so many versions of what happened in a mere 27 seconds, even after an SIU investigation and coroner’s inquest, but what no one can deny is that a teenager is dead.”

The playwright knew she wanted to write a play about Reodica’s death that went beyond media reports, and also about her own Filipino community, who rallied around Jeffrey Reodica’s brother Joel.

“I’m not interested in writing a documentary, since no one can state the truth. What’s key for me, and most heartbreaking, is that Joel – and his fictional counterpart, Jason – didn’t really know his younger brother until he died.

“Yet that makes sense given where they are in their lives, two teens who go to the same high school but don’t really acknowledge each other. Jason’s the middle child and Jerome outshines him in the family, which creates some of the tension between them.”

Badian uses a chorus that morphs into different characters but also creates the story’s background voices.

“Some of their lines are verbatim from Joel Reodica’s website, now taken offline. At the time, the website was a story itself: people giving testaments to Jeffrey’s life and talking to each other. They are, for me, young people trying to figure it all out, driven by shock to explore their own sense of community.”

The playwright says it was important that the casting of the chorus be diverse. The incident happened in one community, she says, but it could easily happen in others.

“I have no answers but hope people will start asking questions and linger a few more seconds over a headline about a young person being shot.”