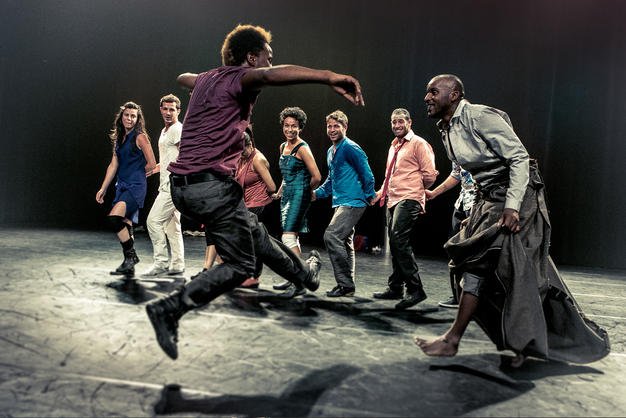 Badke (a play on the name of the dance form) was created in association with long-time partners at the A.M. Qattan Foundation in Ramallah and the Ghent-based les ballets C de la B. The work – which features 12 dancers of Palestinian origin – uses dabke to make points about the need to balance individual expression with a collective physicality expressing community and solidarity.

“This ancient dance has been revived and reused and reconstructed since that specific moment in the 70s just after the defeat of the Arab army by Israel in the Six-Day War,” says De Vuyst from Brussels. “At that time there was a huge need to rebuild – or to build even – a Palestinian identity. And dabke really helped to do that.”

Badke sets the dance as a pivotal part of an imagined wedding celebration, true to its origins. But the choreographers have added acrobatics and hip-hop to the mix and played with the traditional power structures and roles within the dance form.

“We were fascinated by occasions when the social dance can get really wild and earthy. Sometimes women are not included when that happens, and we have, very carefully, included them. We have also played with the role of the leader of this line dance. In Badke we share that role between the whole cast. That’s a very big modification. We’ve changed it from something hierarchical to something more horizontal.”

De Vuyst, who frequently works in Palestine, admits that all of these modifications have been “tricky.” But she says the work has been well received in the Middle East, where the company has performed it in both Ramallah and Jerusalem.

“Even those who consider themselves the custodians of the tradition have approved of it.”

Du Vuyst finds that a hopeful sign and believes that the worlds of contemporary and traditional dance will continue to cross-pollinate in these ways.

“I’m fascinated by the history that is written in bodies,” she says, “not just in collective bodies, but in the bodies of individual people. I think it’s beautiful, and it has great potential to speak to us.”