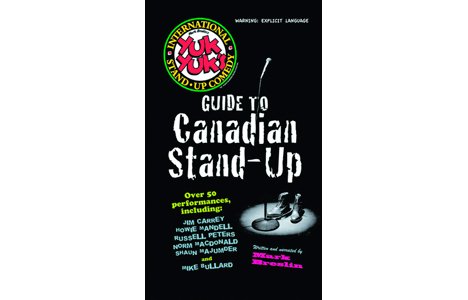 First, the obvious. The Yuk Yuk’s Guide To Canadian Stand-Up consists primarily of comics associated with the famous comedy club chain. It’s in the title, and co-founder Mark Breslin has chosen the talent.[rssbreak]

That said, most of the greats are here, from the past (Jim Carrey, Howie Mandel, Mike MacDonald) to present (Russell Peters, Kenny Robinson, Elvira Kurt) and future (Jeff McEnery, Nikki Payne, Jason Rouse). There’s even a section on the roots of Canadian stand-up, including folks like Don Harron, Chas Lawther and David Steinberg.

Initially, I was disappointed that Breslin introduces each comic on the four-CD set. Why read or hear about comedy when you can listen to the jokes yourself?

But the impresario’s analyses are spot-on and show off the breadth of his knowledge. References to F. Scott Fitzgerald, Dadaism and beat poetry never sound pretentious but give the artists the context they deserve yet seldom get.

Breslin also doesn’t hold back on sensitive topics such as why someone like Mike MacDonald has never broken through to mainstream audiences. And, before introducing such stellar female talents as Tracey MacDonald and Shannon Laverty, he addresses the lack of women in comedy.

The best clips include signature material by Peters, Mike Wilmot, Rouse and Payne. Seán Cullen’s surreal off-the-cuff zingers feel ageless, unlike the dated, homophobic clips on a bonus disc that purport to provide “the funniest 50 minutes ever.”

The sound quality isn’t always the best – you can hear a beer order during Kate Davis’s clip – and, unfortunately, there’s no written documentation about when and where the clips were recorded. A “collector’s edition” booklet features some cute archival photos, however.

Some names are woefully left off. Where’s Harry Doupe? Debra DiGiovanni? Tim Steeves? Jon Dore? And some questionable names made the cut, probably for political reasons.

Still, there’s nothing like this out there in the market. It’s a perfect gift for long-time comedy aficionados and newcomers to the art of funny. Aspiring comics should consider this one-stop shopping.