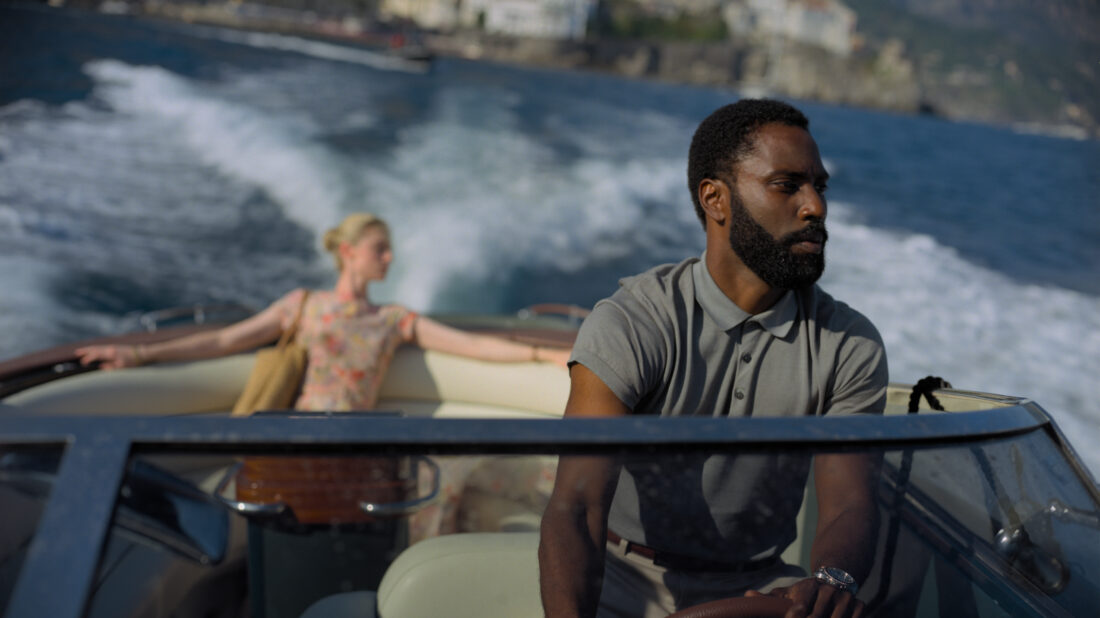 Tenet star John David Washington says he never expected to be playing a globetrotting debonair spy at the movies, not that he didn’t dream of it.

“Who wouldn’t want to play a spy or be in an event film?” asks the former football player, who gives James Bond a run for his swagger in Christopher Nolan’s Tenet.

Nolan, the director behind Inception and The Dark Knight trilogy, has compared Washington to Sean Connery when discussing casting the BlacKkKlansman actor in his genre and mind-bending spy thriller. But until our interview over Zoom, the Tenet star didn’t realize that he is the first Black actor to star in a spy movie.

“Will Smith, at some point, right?” asks Washington in disbelief.

Smith did voice a spy in the animated family comedy Spies In Disguise. And then there’s Men In Black, which, c’mon. And Washington’s own father, Denzel, plays a rogue CIA operative in the Johannesburg-set action thriller Safe House. That movie doesn’t fit neatly into the spy genre, either. Nor does Tenet with its heady sci-fi concept about time inversion.

But it’s John David Washington who gets to play a game of intrigue across continents while riding on yachts in luxurious threads.

The spy genre has a certain executive class about it. And no Hollywood director has cast a BIPOC in such a role. Tenet seems aware of the expectations we have about who fills such roles. Washington’s character, who is only known as the Protagonist, is often sized up and dismissed as though he’s out of his league and doesn’t belong.

But the Tenet star tells NOW that he never considered race or class as part of the equation in scenes where his character walks through rarefied circles.

“I think he was playing a role,” he says about a character that regularly defies expectations, whether he’s being smooth with words or putting a cheese grater through a henchman’s face. “If he has to be the class clown or the smartest one in the room, he has to get it done. That was the approach I took anyway. By any means necessary.”

Washington is understandably wary about discussing race. Black people often have to do so much labour when it comes to these discussions. The last few months have been especially trying. Who knows how many questions the actor has had to answer about race, even though the subject doesn’t play an obvious role in Tenet.

But Tenet’s casting is a progressive step for Nolan, who in a career that spans over two decades, has only cast guys like Morgan Freeman and Ken Watanabe in supporting roles. Writer Sunny Singh criticized Nolan’s last movie Dunkirk for whitewashing historic events by not including the Indian and African soldiers who served. So I can’t help but wonder if that inspired Nolan to check his assumptions about casting, before running with Washington, Yesterday’s Himesh Patel and Indian actor Dimple Kapadia in Tenet.

“I got told no a lot on some event films that I auditioned for,” Washington explains. “I didn’t know how I was going to fit in the industry. When you get opportunities from directors that you admire and love, it can expand your mind and the possibilities of what can be for you. I love that I got to be in a film like this.”

The victory of starring in a movie like Tenet came with what Washington calls an emotional roller coaster. The COVID-19 pandemic put the entire movie industry on pause, and Tenet has been at the forefront of conversations about reopening theatres. A streaming or digital release was never an option for the movie shot on IMAX and 70mm film. And director Nolan has reportedly been adamant about opening it as soon as possible to help movie theatres survive.

Tenet held onto its July 17 release date till the last minute. But the COVID-19 cases in the U.S. keep surging. So Tenet’s release got pushed a couple of weeks, and then a couple more, before getting pulled indefinitely for a time. Entire theatre chains were planning and re-planning their openings and safety procedures during the COVID-19 pandemic around Tenet. Washington describes oscillating between disappointment and hope as he watched how the U.S. has been handling the pandemic and the way Tenet danced with delays.

“Just doing these interviews, sitting here talking to you right now, it means it’s really happening,” he says. In an unconventional release plan, Tenet is opening in Canada and across the globe on August 26, with a U.S. opening to follow on September 3. “This thing is really going to come out. I feel once the people see it, it’s going to be a great reminder why cinema is so important.”

Washington, however, didn’t see Tenet the way the rest of us will.

“It was a family atmosphere,” he says. “I saw it with my family. I just remember my siblings and my mom just yelling as if we just won the Superbowl or something during certain scenes.

“Everybody that I know who has seen it says they can’t wait to see it again,” Washington adds. “They have to see it again. [That] is what Chris Nolan does. That’s usually the feeling you get out of his movies.”

Read our Tenet review here. Watch more from our interview with John David Washington in the video below.