Including crokicurl at Stackt Market, the Weather Station, the return of Second City and a Robert Houle retrospective at the AGO 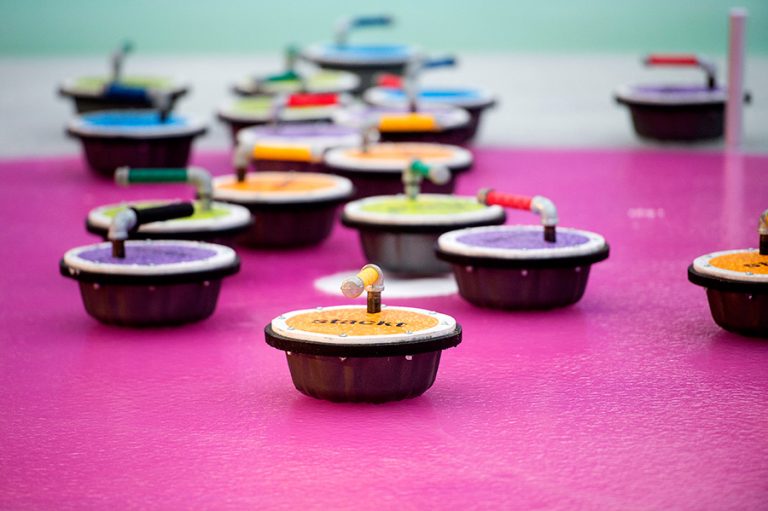 After a pandemic hiatus, Stackt Market is bringing back the crokicurl rink.

The made-in-Canada game combining crokinole and curling returns to Stackt Market after a pandemic hiatus. The rink likely be a hot ticket during the shipping container market’s Holiday Hills festival, which also includes live music, comedy, drag brunch and a rooftop patio.

The four-day festival includes everything from a concert, a film screening, a DJ skate night and a literary round table. Best thing? It’s all free, with a first-come, first-serve policy.

Robert Houle at the AGO

The Art Gallery of Ontario’s massive retrospective on internationally acclaimed Saulteaux artist Robert Houle opens this weekend. Red Is Beautiful will feature more than 90 large installations, paintings and drawings, encompassing works that run the gamut from abstract to pointedly political.

Stars have made their annual Toronto holiday shows part of their emotional indie pop brand for decades, and now they can do that again. The Together Tour brings them back to the stage so you can belt out Your Ex-Lover Is Dead and shed a tear or two over a melancholy melodica.

Annie Hart might be best known for her work in Au Revoir Simone – a band that got the pleasure of playing a full live song in the rebooted Twin Peaks a few years ago – but she’s got a mesmerizing new ambient solo record, Everything Pale Blue. She tells me she plans to make this show special with a bevy of vintage synths, vibraphone and accordion, starting with the drifty stuff and then playing fan favourites from her more pop-based previous records.

The acclaimed, Olivier Award-winning remount of Andrew Lloyd Webber’s revolutionary rock musical touches down at the Princess of Wales for a month-long run. Now it stars the award-winning actor Tyrone Huntley in the role of Judas.

The city’s sketch and improv institution returns in their new temporary home on the Danforth. Mainstage show Welcome Back To The Future promises to get us laughing at the new normal, while the Tourco show The Fast And The Furiously Festive! sends up the holiday season.

Local folk-rocker Tamara Lindeman and her band the Weather Station had a mid-career breakout this year with Ignorance, a climate-emergency-riffing album that resonated all over the world. She only got to do a virtual release show, so this overdue hometown gig is a big one. Her current live band is impeccable, too.

Recently voted best karaoke in Toronto by NOW readers, Good Enough Live Karaoke celebrates eight years this weekend. The live-band karaoke group will perform with a special guest before handing the mic to sign-ups who have chosen songs off their extensive repertoire of 250 songs.

The Baby G, the Garrison’s little sibling music venue on Dundas West, is coming back to life with a new no-cover Sunday series. A bit like Wavelength in its old Sneaky Dee’s home (for those who remember), it’s a great casual way to see some up-and-coming Canadian talent whether or not you know much about the bands on the bill. The first one is a good one with a soulful bill of Hanorah, HMLT, Charlotte Fabro and DJ Patrick Grant.