The giant rubber duck is floating back to Toronto… virtually 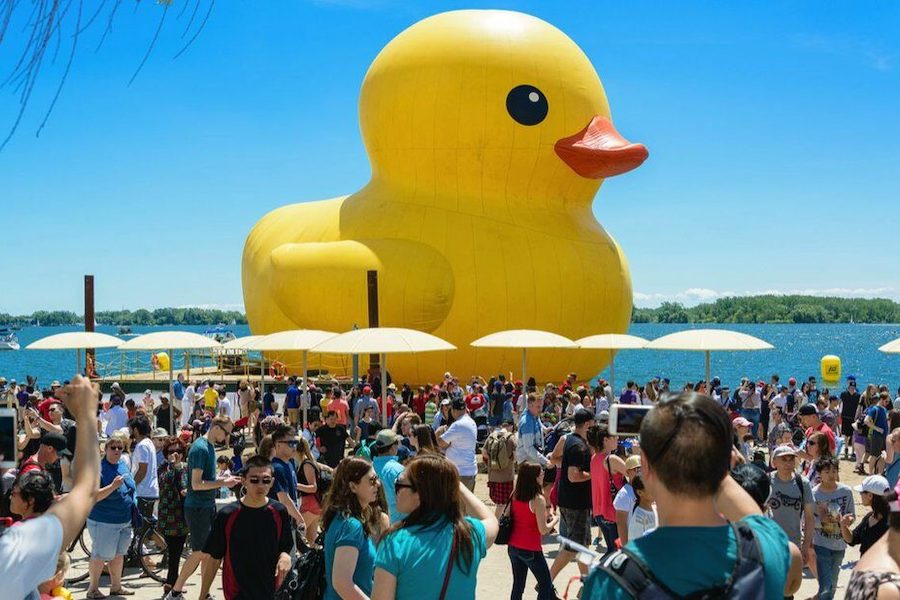 If you didn’t catch a selfie with the giant rubber duck that floated into the Toronto waterfront four years ago, now’s your chance to fake it using augmented reality technology. The six-story, 30,000 pound rubber mama duck that went viral in 2017 is returning to Toronto virtually as part of the Redpath Waterfront Festival.

The rubber duck, touted to be the world’s largest, was supposed to return in person at the Redpath Waterfront Festival last year, but those plans were cancelled to avoid drawing crowds during the pandemic. The annual festival hosted by the Waterfront BIA is pivoting this year using an AR-assisted Redpath Waterfront Trail.

From September 17 to October 3, users can visit five AR stops located along Queens Quay between the Keating Channel and HTO Park. At each stop, QR codes will load up virtual experiences channelling Toronto waterfront’s past, present and future.

The virtual rubber duck at Rees WaveDeck is the final stop along the path from the east, with earlier AR experiences including a look into the future at Bayside Toronto, a swim with whales near Sugar Beach, walks on water and views into what the waterfront looked like in the 1920s.

The AR installations tap into an artificial vibe when it comes to finding moments for the gram. We’re now at the point where a viral moment (the great rubber duck fiasco of 2017) is being recreated virtually, which feels like some full-circle, state-of-reality type of deal.

But there are options for people who would rather take their selfies with subjects that are physically present – because we actually have to make these distinctions now. The Redpath Waterfront Trail will also include art installations, including a live presentation of Anishinaabe artist Que Rock bringing a plain wall to life with a graffiti mural.

And local business like Against the Grain, Pie Bar and the Westin Harbour Castle will offer discounts for those stopping along the trail to grab a bite and take scenic pics on their patios. There’s no duck on the menu, though.