Beloved York University theatre professor Batdorf has been involved in some of the citys most memorable productions, including 2006s Gorey. 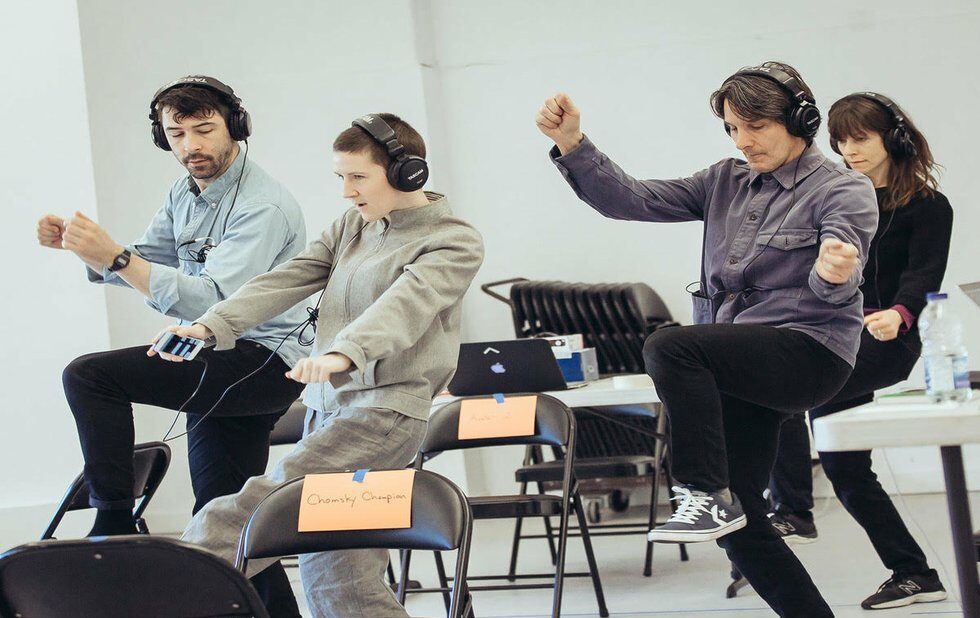 Beloved York University theatre professor Batdorf has been involved in some of the citys most memorable productions, including 2006s Gorey Story (which introduced us to Christine Horne), 2007 SummerWorks Jury Prize winner Birds Eye View and a tour-de-force version of Peer Gynt starring Susan Coyne and Matthew Romantini.

The Red Horse Is Leaving was inspired by the journals of Batdorfs mother, Thaya Whitten, a Nova Scotia painter, performance artist and musician. Batdorf performed an earlier version as a solo show in 2007 now it’s a two-hander with actor Zoe Sweet. The interactive piece, choreographed and co-directed by Kate Digby, also makes use of biosensors to evoke Whittens life and explore themes of madness and creativity.

There are lots of misconceptions and cliches about mental illness and art out there. Expect Batdorfs piece which has only three performances to be unique and brutally honest.

One of the citys original site-specific ensembles, this fiercely eclectic company which now splits its time between Toronto and Brooklyn always uses movement, text, design and setting in intriguing ways. Their latest, Cafe Sarajevo Episode 1, takes its inspiration from a debate between theorists Michel Foucault and Noam Chomsky that aired on Dutch television in 1971. Whoa.

The show will use that year in which the Vietnam War was raging, the Doors ruled the airwaves and people were taking psychedelic drugs and engaging in free love to reflect on our own tumultuous times. The use of a smartphone app the show is being billed as a live podcast experience will add another fascinating layer to the experience.

We were impressed by Cordners stage presence at SummerWorks last year as a tough-as-nails nomad in Divine most recently, she commanded attention as a conflicted goddess of the afterlife in the sold-out Fringe Festival hit Featherweight (which has a two-night remount August 4-5). This year at SummerWorks, shes re-staging Body So Fluorescent, her solo show that debuted at the 2017 Rhubarb Festival, in which she plays two friends confronting issues of Blackness and oppression after a night of clubbing.

At Rhubarb, we watched in fascination as Cordner did this in part by stepping in and out of two pairs of shoes, physically incorporating the experience of otherness into her performance. Its likely she and co-creator/director David di Giovanni have expanded the show to incorporate even more aspects of the performers instrument.

August 11 to 19 at the Theatre Centre BMO Incubator

In his bestselling novels Fruit (runner-up for Canada Reads in 2009) and Natural Order, Francis has proven hes a gut-bustingly funny and moving chronicler of queer life. And for years his Quill & Quire column, the Agony Editor, was must-reading for those in publishing. Now theatregoers can experience his work in Box 4901.

The show is based on a personals ad that Francis placed in 1992. Out of everyone who responded, he didnt reply to 13. But now, more than a quarter century later, he has, and the show will feature those replies. The kicker? Francis and some of the citys most prominent queer performers, among them Keith Cole, Eric Morin, Chris Tsujuichi, Geoffrey Whynot, Chy Ryan Spain, Jonathan Tan, Michael Hughes and Daniel Krolik, will read the exchanges. Rob Kempson, who helmed Maggie & Pierre and Robert. recently, directs.

August 12 to 19 at the Theatre Centre BMO Incubator

Isador was last at SummerWorks as a performer in 2016 with Situational Anarchy, his solo show about his relationship to the music of Against Me!s Laura Jane Grace it plumbed his raw honesty about his obsession with, disenfranchisement from, and rediscovery of the ethos of punk rock.

For his new solo show, the intense, charismatic Isador draws on one of his other jobs as a freelance columnist for outlets such as Vice, turning a rejection letter for a staff job at Buzzfeed into an indictment of our current media landscape, …And Youll Never Believe What Happens Next.

August 9 to 18 at the Theatre Centre BMO Incubator

This festival will showcase an interesting redux for Jun. At SummerWorks in 2009, she directed a large ensemble in Bertolt Brechts Fear And Misery Of The Third Reich. This year, she directs a new cabaret adaptation by Red Light Districts ted witzel and Susanna Fournier, under the plays lesser known alternate title, The Private Life Of The Master Race.

Broken Social Scenes Jason Collett, whom Jun previously directed as Slim in Sam Shepard and Patti Smiths Cowboy Mouth, spearheads the cabaret, which includes composing original music. Were intrigued to see what Jun has up her sleeve after her controversial staging of Girls Like That this spring at Tarragon (to be fair, no-one who objected to the show took issue with Juns steady handling of it, which featured multiple dance numbers).

August 9 to 16 at the Theatre Centre BMO Incubator

Moss is a bona fide star of the Fringe and Next Stage, where her funny and poignant shows like Modern Love, Polly Polly and Cam Baby have debuted to great acclaim and sold-out crowds. Incredibly, A Girl Lives Alone marks her SummerWorks playwriting debut.

A mashup of Hitchcock, old-timey radio plays and a random episode of Law And Order: SVU, the ensemble horror comedy follows Marion, a young woman who moves to New York City after a break-up. A murder is committed in her walk-up apartment building. Who did it? Is Marion next? And whats with all those creepy sounds? Oh yeah, one of the other tenants in the building is a foley artist (Richard Feren designed the sound and wrote original compositions).

Now based in New York City, Moss developed and workshopped the play at the Juilliard School, where it got dramaturgical support from theatre heavy-hitters Marsha Norman, Christopher Durang and David Lindsay-Abaire. Get your tickets early, folks.

August 11 to 19 at the Theatre Centre Franco Boni Theatre

Well known in the urban dance and hip-hop communities as Fly Lady Di, Reyes will present her first solo theatre effort as part of the Lab series. Recently seen choreographing and performing with tribal electro-fusion band DATU, Tagalog-rapping MC HanHan and dance troupe Hataw, and working with high-profile artists Ciara, Pharrell and Jason Derulo, among others, Reyes moves in a world where catchy dance combines influences from visual arts, music and street culture.

For Third World, Reyes mixes voguing, waacking and house moves with aspects of folkloric Filipino culture (Faye Roncesvalles of Folklorico Filipino Canada is advising her on the show). The choreographic intersections, employed to riff on identity and loneliness, should be super-fun to watch. And with projection design by frequent collaborator Maylee Todd, this is going to be one stylish debut.

August 9 to 13 at the Theatre Centre Franco Boni Theatre

Swan is one of the most versatile stage performers around, having been part of some of the countrys most esteemed dance companies and also bridging genres in works like Appetite and Road Trip. SummerWorks audiences know her work well. Appetite played the fest before going on to a multi-Dora-Award-nominated remount. And so did The Re-View Project, an installation piece that bluntly and sincerely asked viewers to express how they felt about a show.

Swans new work, Yes, promises to be no less intriguing as it takes us through a history of modern dance. A graceful, beguiling performer, Swan will use theatre, dance and bouffon to touch on Yvonne Rainers 1965 work No Manifesto and open up a dialogue about the state of the art. Should you see it, along with the other show on the double bill, Katie Lyle and Shelby Wrights A Room To Perform? The answer, of course, is in the title.

August 11 to 18 at the Theatre Centre BMO Incubator

Its been a big year for Washburn, who earned a Dora Award for portraying conflicted Metis revolutionary Louis Riel (and dozens of other historical figures) in Confederation And Riel. Im the first female in a VideoCabaret show to play a lead male role, she said in her acceptance speech.

Shes remained busy on Soulpeppers stages this year, appearing in their productions of La Bete and Animal Farm, but for SummerWorks, shes downshifting for a smaller, more intimate project.

She and Unspun Theatres Shira Leuchter (last summers The Smile Off Your Face) will be meeting with patrons of Lost Together, one at a time, to reimagine and recreate that lost thing for you. Washburns eclectic career has included stints as an improviser, clown and workshop facilitator, so the level of close interaction this project hints at is something we believe shell excel in.