What: Writer/actor in Nightswimming/Factory Theatres production of Broken Tailbone, October 2 to 13 at Factory Theatre (factorytheatre.ca).Why: Weve been fans. 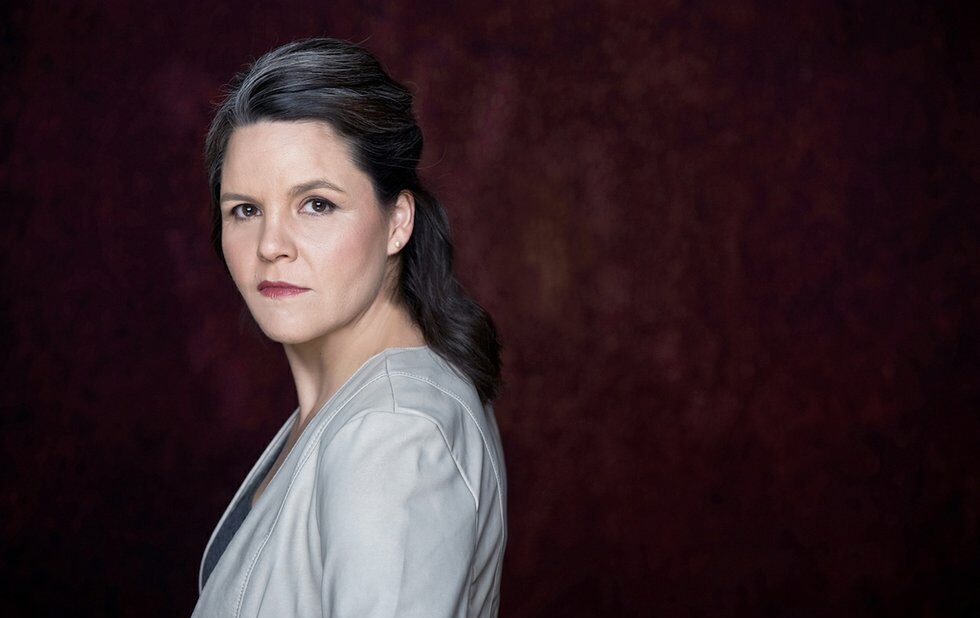 What: Writer/actor in Nightswimming/Factory Theatres production of Broken Tailbone, October 2 to 13 at Factory Theatre (factorytheatre.ca).

Why: Weve been fans of Carmen Aguirre since her first book Something Fierce: Memoirs Of A Revolutionary Daughter won CBCs Canada Reads in 2012. This fall the Vancouver author, actor and playwright brings her show Broken Tailbone to Toronto to launch the Factory Theatres 50th-anniversary season, as part of the CrossCurrents Canada programming. Directed by Brian Quirt, the show provides a rare, intimate look at the world of Canadian Latinx dance halls. Aguirre never shies away from exploring difficult themes and her own personal stories. And this time shell do it while leading the audience in a salsa class. The show blends politics, intimacy and radical protest into an unforgettable dance party. (Seriously, make sure you wear comfy footwear.)

Why: Armstrong is getting set to lend her quirky humour to two different productions this fall. Weve been enjoying her as Stella in the web series Running With Violet, which recently began its second season. For years now, shes been part of the hilarious and often bizarre onstage worlds created by playwright Kat Sandler. Theyll reunite for the world premiere of Sandlers new play, Yaga, which opens the Tarragons season. Also starring Will Greenblatt and Seana McKenna, and directed by Sandler, Yaga is a play about secrets, magic and murder. Soon after that, Armstrong will head to the Danforth to join the cast of Between Riverside And Crazy. She brings a nervous intensity to the stage that we think will be a perfect match for playwright Stephen Adly Guirgiss high-stakes universe.

What: Choreographer of Orpheus Alive for the National Ballet of Canada, November 15 to 21 at Four Seasons Centre for the Arts (national.ballet.ca)

Why: As choreographic associate to the company, Binet has made a handful of remarkable ballets for the National. Some are dreamy, others bold, all of them challenge ballet conventions in conceptually bracing ways. His formally innovative Dreamers Ever Leave You was conceived as a ballet installation and was staged at the Art Gallery of Ontario in 2016 and in Londons Docklands as a co-pro with the Royal Ballet in 2017.

For the new Orpheus Alive, Binet (along with collaborators Toronto playwright and dramaturg Rosamund Small and New York-based composer Missy Mazzolli) re-calibrates the classical Orpheus and Eurydice myth in part by flipping the genders of the main characters. Casting Orpheus as a woman and Eurydice as a man should disrupt the gender-specificity of ballet vocabularies to promote new perspectives on this ancient story of rescue, love and acceptance.

What: Set and lighting designer for The Flick, a co-production between Outside the March and Crows Theatre, at Crows, October 6 to 27. crowstheatre.com.

Why: Blais is responsible for some of the most striking theatre designs in recent memory, from the intentionally cluttered and immersive set for Jerusalem which won him a Dora last year to the filmic funhouse set of the recent Tape Escape series. For The Flick, Annie Bakers play about minimum-wage ushers at an old-school movie house directed by Outside the Marchs Mitchell Cushman Blaiss challenge is to create a convincing classic movie theatre. Banks of seats from Torontos historic Humber Theatre are being brought in, and the smell of popcorn from the lobby (whose design is by Blaiss frequent collaborator Anahita Dehbonehie, whos also doing the costumes) should add to the authenticity.

Why: Individually, theyre two of the most multitalented, politically engaged theatre artists in the city. Bonnells (left) performances in her play bug, as well as Two Indians and The Crackwalker are seared into viewers minds, while Greenblatts work on plays like Two Birds One Stone (which she co-wrote with Rimah Jabr), Calpurnia and A Midsummer Nights Dream demonstrate a big range. Now, just in time for the federal election, theyve collaborated on The Election, which explores the experiences of Indigenous, settler and newcomer Canadians in the political process. Directed by Jennifer Brewin and starring a talented cast (Augusto Bitter, Rachel Cairns, Joelle Peters, Anand Rajaram, Rose Stella and Courtenay Stevens), the show is must-see viewing before casting your ballot October 21.

Why: Whether hes got a harmonica around his neck or a guitar in his hands, Dixon is equally at home belting out rock, blues and soul. This fall Dixon brings his musical and acting talents to the surreal chamber musical Ghost Quartet. Written and composed by Dave Malloy probably best known for Natasha, Pierre & The Great Comet Of 1812 Ghost Quartet debuted off-off Broadway in 2014 has played numerous stages around the world. The Toronto version will co-star Hailey Gillis, Kira Guloien and Andrew Penner. Marie Farsi directs this song cycle that incorporates folk ballads, doo-wop, gospel, jazz noise and drinking songs. Were certain Dixon can handle every style.

What: Actor in Between Riverside And Crazy at Coal Mine Theatre, November 24 to December 22. coalminetheatre.com.

Why: Di Zio is more familiar to TV and film audiences, especially for his role as Mike Spike Scarlatti, the high-tech specialist cop in the Toronto-shot series Flashpoint. But theatregoers know him for his intense and unforgettable stage work as the idealistic dreamer in Rosa Labordes Leo, for instance (which won him a Dora nom) and one of the twins in the English-language premiere of Wajdi Mouawads Scorched. He also starred in Coal Mines breakthrough, award-winning production of Stephen Adly Guirgiss The Motherfucker With The Hat. So his understanding of the playwrights gritty language should be evident in the companys production of the Pulitzer Prize-winning Between Riverside And Crazy, directed by Kelli Fox.

What: Choreographer and performer for Conversation, a commissioned work premiering at Fall for Dance North, October 4 and 5 at Meridian Hall (formerly The Sony Centre). ffdnorth.com.

Why: One of Torontos most charismatic street dancers, Lady C is also one of the most versatile. Training in diverse dance techniques married to specialties in locking and house, and highly evolved musicality (Fraser is also a recording vocalist) make her a formidable competitor on the international battle circuit. Shes also a member of the Toronto dance company Holla Jazz (with whom she won an Outstanding Performance, Ensemble Dance Dora in 2018 for FLOORD).

Conversation will put Frasers myriad skills to ample use filling the vast Meridian stage with flowing grooves and funk it features live music by the Toronto instrumental group re.verse and a cast of hip-hop dance regulars that includes Kalliane Bremault, Gautam Tiwari, Raoul Wilke and Stephanie Caldeira, as well as the all-styles champ Lady C herself.

What: Writer/performer in The Book Of Life, a co-pro by Volcano Theatre and Canadian Stage, at the Berkeley Street until September 29. canadianstage.com.

Why: Weve seen and savoured the work of all the artists on this list before except for Kateses. But the Rwandan director, author and humanitarian has been lauded around the world, and when NOW talked to Canadian Stages artistic director, Brendan Healy, earlier this year, he called Katese an inspirational human. The show, remounted to commemorate the 25th anniversary of the Rwandan genocide, is based on letters survivors and perpetrators wrote to people whom they lost or killed during the genocide. Directed and co-created by Volcanos Ross Manson, its sure to be a cathartic world debut. Healy says the shows about forgiving and moving forward. Something we can all use at this moment in history.

What: Director of Factory Theatres revival of Trout Stanley, October 19 to November 10. factorytheatre.ca.

Why: Up until now, Otu has made her reputation helming plays that shed light on the Black experience, from August Wilsons Ma Raineys Black Bottom and Motion and DJ LOqenzs Oraltorio: A Theatrical Mixtape to last seasons smash hit The Brothers Size, aka the play that Drake attended. Each production was handled with clarity, theatricality and careful attention to character. All of that should come in handy with Otus revival of Claudia Deys poetic tragicomedy about a mysterious man who disrupts the lives of two fraternal twins in a small northern BC mining town. Handling a new classic in the Canadian theatre canon with an exciting all-Black cast this time (Natasha Mumba, Shakura Dickson and Stephen Jackman-Torkoff) seems like an inevitable step in Otus major career.

Why: We cant take our eyes off Pitre when shes on a stage. Earlier this year she closed out the off-Mirvish season playing Dr. Madden in the Mirvish presentation of The Musical Stage Companys production of Next To Normal (the production won a 2019 Dora Award). Now Pitre is about to return to the CAA stage as Edith Piaf. Alongside Jayne Lewis as Marlene Dietrich, the formidable performers will helm a musical drama about the lifelong friendship of two legendary women. It isnt Pitres first time embodying the famed French chanteuse shes portrayed her many times before and recorded her songs. The show features 20 numbers. Were certain watching her version of La Vie En Rose will break our heart in the most beautiful way.

What: Actor in Soulpeppers production of A Streetcar Named Desire, September 21 to October 13 at The Young Centre (soulpepper.ca).

Why: The last time Soulpepper staged Streetcar the company was a burgeoning new player in Toronto performing at Harbourfront. Now, in its 20th season, the company brings Tennessee Williamss Pulitzer Prize-winning play to its own theatre at the Young Centre, with Rutherford in the iconic role of Blanche DuBois. Its been 11 years since we last saw Rutherford on the Soulpepper stage, but remember her delightful turn as Pigeon sister Gwendolyn in The Odd Couple and playing Phoebe in As You Like It. Under Weyni Mengeshas direction, we look forward to this more serious turn from the expressive and intuitive actor.

What: Actor in Soulpeppers production of Almighty Voice And His Wife, October 11 to November 10 at the Young Centre (soulpepper.ca). And curator of Native Earths 2-Spirit Cabaret, November 16 at Buddies In Bad Times (nativeearth.ca)

Why: Metis artist Washburn never fails to move us. Over the course of her prolific career Washburn has made us laugh (VideoCabarets Confederation Series) and brought us to tears (earlier this year in Nightwoods Grace) so were looking forward to her return to the Soulpepper stage in Almighty Voice And His Wife by Indigenous Canadian poet and playwright Daniel David Moses. In this two-hander, Washburn will be paired with James Dallas Smith. Based on a true story, the play explores the role of Indigenous people in Canada: its a love story that incorporates vaudeville elements in the second act. Jani Lauzon directs (fun fact: she also performed in the original production back in 1992). Soon afterward, the tireless Washburn will curate the 2-Spirit Cabaret. It has sold out for the last three years and its on for one night only, so grab tickets while you can.

What: Writer/performer in Second Citys 83rd revue, If I Could #Throwback Time, now in previews and opening October 10 at Second City. secondcity.com.

Why: Over just two Second City mainstage revues, Wilson whom Fringe audiences, of course, knew from the duo Peter N Chris has emerged as one of the funniest, most reliable players. Whether hes a dude on a first date in the post-#MeToo era, riding home late at night on a bike (great physicality) or impersonating an old-school computer, he brings a spontaneity and freshness to every scene. Expect more of the same when he and returning ensemble member Sharjil Rasool are joined by mainstage newcomers Clare McConnell, Natalie Metcalfe, Alan Shane Lewis and Tricia Black.