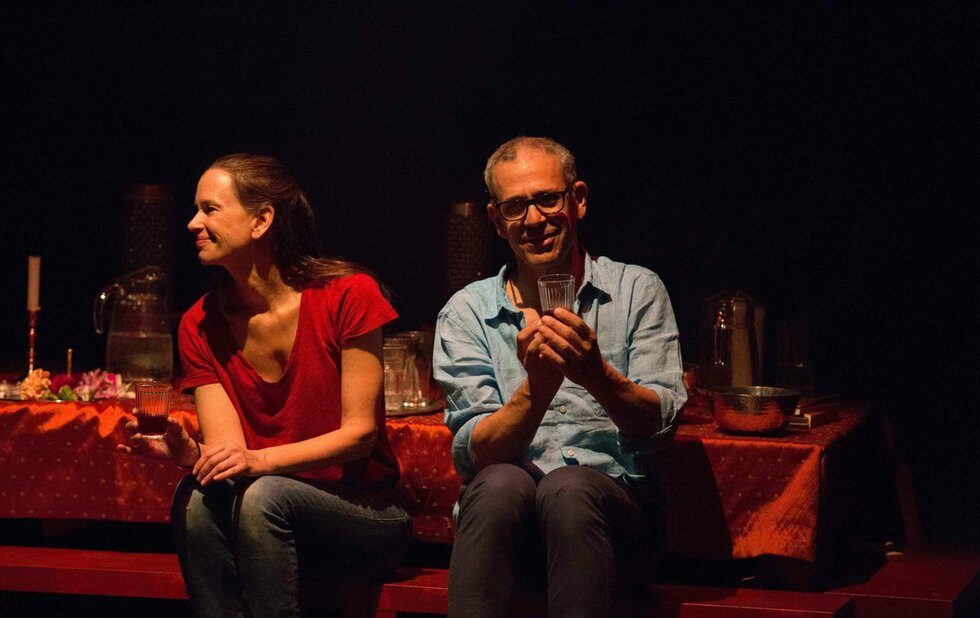 You know how when your very smart, very independent friends fall in love and all they want to do is talk about their love and their relationship… and youre basically left to nod and pretend like youre interested?

Thats a bit how it feels at 40 Days And 40 Nights, the experimental wank-off at the Theatre Centre that, while 90 minutes, sometimes feels as durational as that title.

Apparently (hey I dont keep up with theatre gossip) Daniel Brooks (formerly of Necessary Angel, a co-producer) and Electric Companys Kim Collier are a couple and in love.

The two Siminovitch Prize winners try to illustrate that and make us meditate on the concept of love ourselves in a rather contrived salon-like setting.

With our shoes, coats and other personal items placed on individual mats outside the playing area, we enter ringing a bell as we come in and sit in a horseshoe formation to witness the couple doing things like reciting poetry to each other and sipping wine. (Yes, this show is as bougie as that sounds.)

But oh, we dont just witness these sweet nothings. No. We actually get to add our own profound contributions, writing down with a piece of chalk what love means to us, answering questions in the dark about love and sex by pressing a little light, and then doing something vague at the end by throwing flower petals into a circle.

The effectiveness of that latter scene was interrupted on opening night by a missed music cue (compositions and sound design is by Andrew Creeggan, with additional composition and sound by Debashis Sinha). And the energy in the air at that anxious moment was more dramatic than anything that had preceded it.

Only one sequence in the show displays the kind of inventiveness the two directors are known for. In a series of scenes involving a bathtub, the pair suggest the evolution of a mature relationship, up to and including old age.

Masterfully lit by scenographer Ken Mackenzie and effectively performed by the couple (who arent the most expressive actors), this is a moment to fall in love with. I wish I could say the same about the rest of the show.