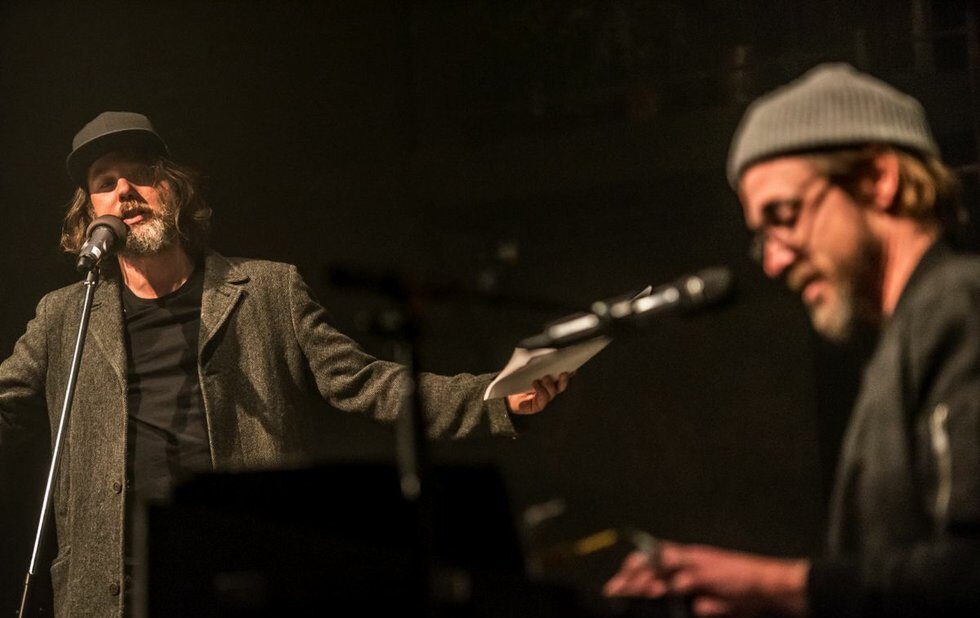 Broken Social Scene band leader Kevin Drews debut as an actor and playwright is a hilarious, insightful and moving look inside the music industry and the anxious psyche of a mid-career rocker who begins to doubt his hit-making skills. Clearly drawing on his own experiences and creative anxieties, Drew conjures an intriguing fantastical conceit to explore these personal and professional worries where writing a hit song is quite literally a matter of life and death.

In the story, Drew and Billy Talent lead singer Ben Kowalewicz play a duo of songwriter angels who magically appear in the final moments of suicide attempts with one chance to perform an original song that convinces the person to live. (No pressure, right?)

The problem is that the duo seems to have lost their touch, and with suicides piling up, they fall under scrutiny from their heavenly overseer, a gregarious A&R (artists and repertoire) executive (Maurice Dean Wint), who, along with his underling (Graham Cuthbertson), attempt an intervention.

Fans of BSS will find Drew playing an instantly recognizable, tongue-in-cheek version of himself, especially in scenes where his mercurial creativity clashes with Kowalewiczs easygoing character in songwriting sessions.

Anyone whos ever been in a band will relate to their snippy dialogue about how many verses is too many before the first chorus, which key signatures are hot or overused, or which variation of a song title to go with. Also very funny are scenes where they meet with Wints spot-on, endlessly watchable boss figure. These highlight the changing, fickle nature of the music biz and the friction between creative and corporate cultures that characterizes the A&R game at major labels but is usually unknown to fans.

Drews script comes loaded with witty one-liners, oh-so-true observations (including running gags about roadies and mic checks) and dark, weird metaphors that seem like a natural extension of his lyrics. As an actor, hes mostly solid but sometimes rushes lines and moments (chalk it up to settling into a new art form). Kowalewicz, also a newcomer to theatre, comes off as a natural and shines as Drews supportive sidekick. Director Chris Abrahams polished production brings just the right amount of realism to anchor Drews enchanted vision.

The show includes two fantastic original songs, bare-bones BSS-style ballads with the soaring stick-in-your-head choruses weve come to expect from Drew. The song in the emotional climax a scene that also features Ngozi Paul is absolutely haunting and betrays any notion that Drew has lost his songwriting touch in real life.

Drew is the second high-profile Canadian indie rocker to put up an impressive show at Crows this year (after Stars Torquil Campbells fascinating imposter study True Crime), and his brave self-examination offers BSS devotees a unique window into his inner life, and offers newcomers a poignant, entertaining portrait of an artist struggling with industry change and self-doubt.