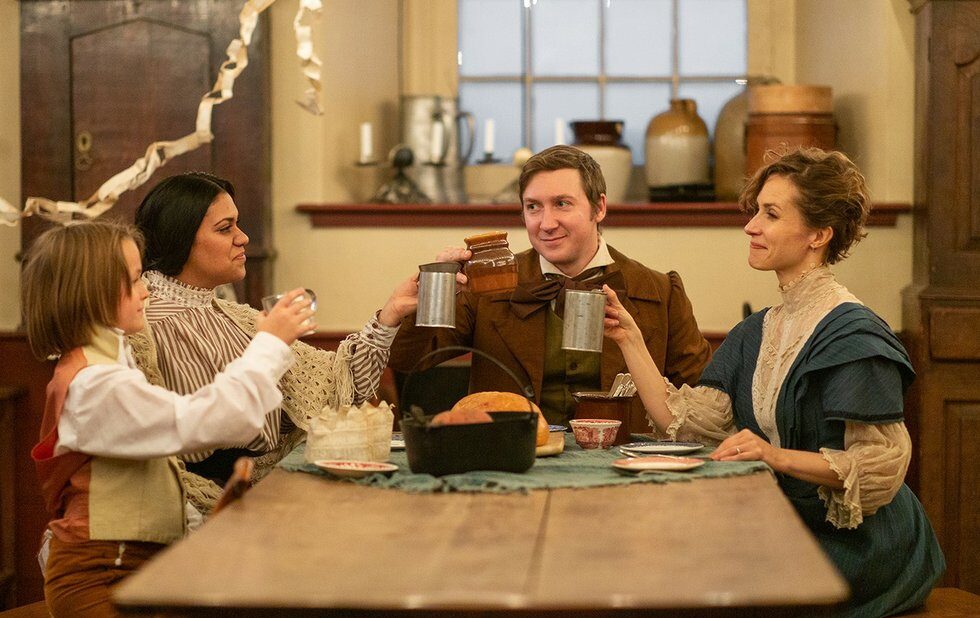 If the thought of seeing yet another staging of A Christmas Carol makes you cringe, check your cynicism – and your preconceptions – at the door. Three Ships Collective and Soup Can Theatre’s version isn’t your same-old,  bah humbug affair. In fact, in Justin Haigh’s clever script, I don’t think the miserly Ebenezer Scrooge (Thomas Gough) even mutters those familiar words. And yet somehow the show captures all the spirit of the Charles Dickens tale.

The walkabout production, revised and polished to an even more effective glow from its sold-out run last year, is performed again at the Campbell House Museum, which provides the perfect setting for the tale of Scrooge’s life-altering visitation by three ghosts one Christmas Eve.

Taking us through almost every inch of the historic landmark (there are seats for those with mobility issues), director Sarah Thorpe evokes everything from the chilly, spartan offices of Scrooge & Marley, where clerk Bob Cratchit (Nicholas Koy Santillo) is seen shivering, to the spacious second-floor main room, site of the long-ago Fezziwig holiday party. Even the carpeted stairwell is used to good effect in a couple of scenes.

Haigh’s additions are brilliant. They range from the identities of two donation-seekers (I think Dickens would approve of the names Bailiwick and Barleycorn) to a salty, innuendo-filled party song (with music by Pratik Gandhi) that adds liveliness to the middle of the play. References to workplace safety and foreclosures have contemporary relevance. And yet a phrase like “Alice is a companion, not a coin purse,” feels era appropriate.

Gough makes an ideal Scrooge: face pinched, voice embittered, savagely sarcastic in tone. Equally fine is Marcel Dragonieri as his dead business partner, Marley, who acts as the play’s narrator – the deadpan looks he gives audience members to follow him are priceless.

While the heart of the show is, of course, Scrooge’s spiritual transformation, Haigh and Thorpe provide a scene earlier on that’s just as effective.

Don’t be surprised if, days after seeing this show, you’re haunted by the play’s generous spirit.