A CHRISTMAS CAROL, THE FAMILY MUSICAL WITH A SCROOGE LOOSE! by Matt Murray (Ross Petty Productions). At the Elgin (189. 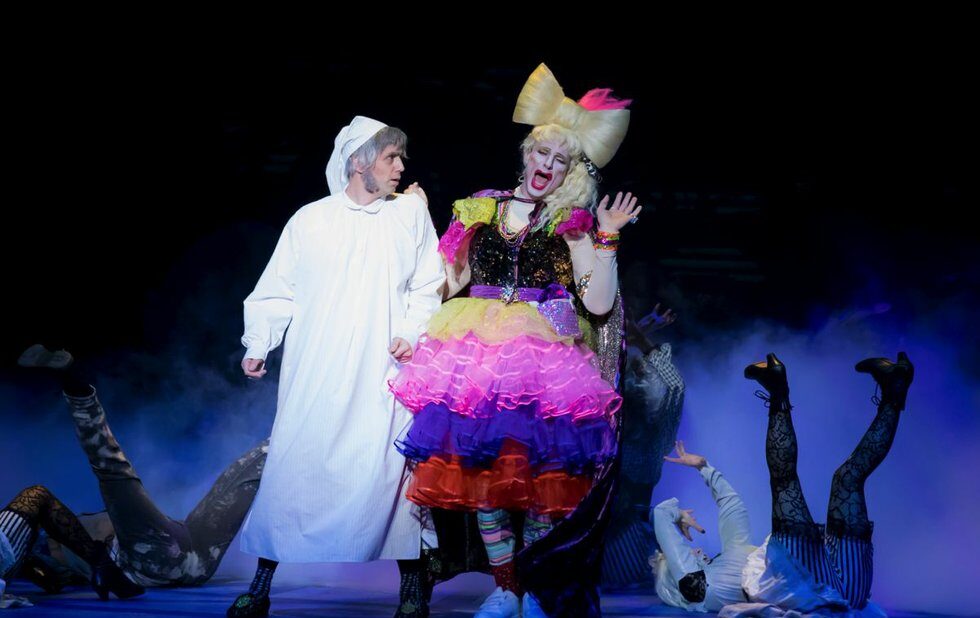 In the age of Trump, a fun panto send-up of Christmass most notorious business mogul is a holiday no-brainer. Sure, this adaptation for Ross Pettys annual show cuts out Tiny Tim and two of the ghosts to add extraneous storylines, but Cyrus Lanes cartoonishly cruel Scrooge and Dan Chameroys campy ghost Plumbum keep this kitschy romp in tune.

Layered with rapid-fire humour for kids and parents, the story finds Scrooge as president of Scrooge Enterprises and launching a new smartphone app that will ruin Christmas by forcing a crippling sales tax on the population.

YTVs affable Eddie Glen elicits lots of kid-friendly audience participation while playing Scrooges underling Cratchit, who struggles with being complicit in carrying out his unstable bosss wanton destruction of the holidays.

In a big and animated performance that lands somewhere between Mr. Burns and a stern Patrick Stewart, Lane absolutely revels in his role as the heel, feeding off the wealth of jeers and boos hurled his way by the audience. Going well beyond stingy miser, he plays Scrooge as maniacally dependent on his moneybags, scoring big laughs during finance-themed numbers like Money (Thats What I Want).

However, its Chameroys outrageous, larger-than-life ghost who owns every scene. With catty one-liners and sassy clap-backs, he totally clicks with Lane as they bicker through past, present and future. Their snippy dynamic is so good it kinda makes the three or four other sub-plots feel redundant. The romantic arc, featuring Jane (AJ Bridel), a Scrooge employee who goes on strike for pay equity for women, and Jack (Kyle Golemba), an unemployed aspiring gift wrapper, feels tacked on, even though they do produce a nice charged moment during Shawn Mendess Theres Nothing Holding Me Back.

The biggest issue with this holiday musical literally called A Christmas Carol is the lack of actual Christmas music. Other than a rockin Run Run Rudolph right off the top, theres nary a sleigh bell jingling as the songbook quickly turns to mega-hits like Thriller and, yes, Despacito.

The show is self-consciously all over the place, but as family-friendly entertainment this holiday tradition is still a treat.