A Dora Awards to make you verklempt 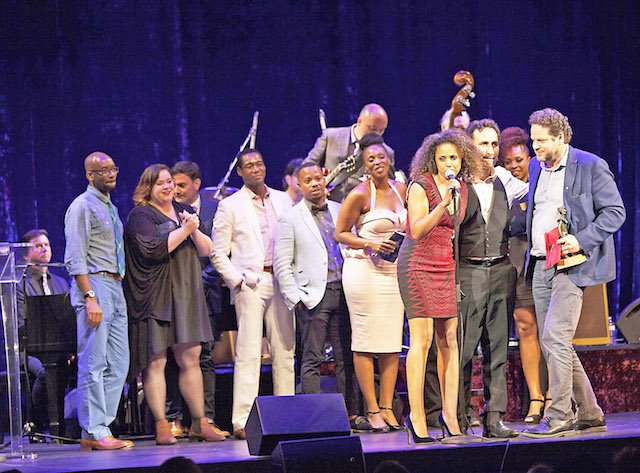 Monday night’s 38th Annual Dora ­Mavor Moore Awards – a celebration of the best in theatre, dance and opera – were an emotional affair, especially since it’s the first ceremony after the passing of NOW’s Jon Kaplan.

A chair reserved in Jon’s name was placed on the stage of the Elgin at the top of the show and remained there all night.

Many presenters and recipients acknowledged Jon, including Nora McLellan, who won best performance by a female in a play, indie theatre (John) presenter d’bi.young, who called Jon a mentor and thanked him for teaching her to be accountable to the audience and nominee Astrid Van Wieren, who spoke on behalf of the Come From Away team after winning the newly renamed Jon Kaplan Audience Choice Award, which was presented by Jon’s husband, Don Cole.

Anita Majumdar won two Doras in the theatre for young audiences category for Boys With Cars (new play and performance), and she recalled Jon coming backstage and talking to her about the anger she showed in this deeply personal work. (It was one of the last plays he reviewed.)

Other emotional highlights included Nick Green’s acceptance speech for The Body Politic (new play, general division). Recounting the experience of doing the show after the Orlando shootings, he described the audience reaction, and said, “This is why live theatre” to loud applause.

Tapestry Opera’s Rocking Horse Winner took home five statues in the opera division, and librettist Anna Chatterton said, “We all do this because it’s an addiction, an affliction – it doesn’t matter who wins.”

The opera’s director, Michael Mori, acknowledged those who live with artists and then said, “I know you guys don’t all go to opera, but if you want to check out something interesting, check out Tapestry.

Soulpepper’s Albert Schultz, accepting the night’s final award for best production of a play (general division) for Father Comes Home From The Wars (Parts I, II, III), singled out nominated director Weyni Mengesha, a graduate of Soulpepper’s Academy, proudly pointing out that “20 graduates of 42 were nominated for Doras tonight.” 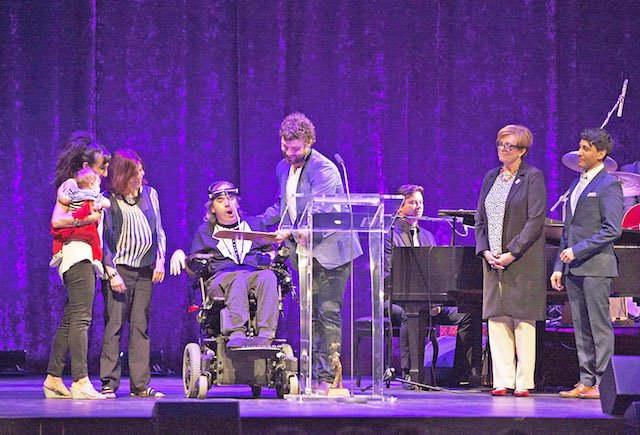 This Is The Point’s Tony Diamanti (centre) spelled out his moving and funny speech for Dan Watson to read.

Ahuri Theatre and the Theatre Centre’s production of This Is The Point, a play about four people affected by cerebral palsy, won two Doras in the indie theatre category: best ensemble and best new play. For the former, Dan Watson read out a graceful and fun speech which Tony Diamanti presented by using a metal pointer attached to a headband to indicate letters on a board.

And McLellan, in her acceptance speech for John, talked about being a woman over 60 who was between gigs, then went on to quote from A Chorus Line about being given a chance to work.

Host Raoul Bhaneja, backed by his solid band The Big Time, was a sharp host and singer (a highlight was a duet with the great Jackie Richardson to introduce the in memoriam montage). No doubt helped by the awards’ writer, Diane Flacks, Bhaneja literally pushed the show along when it flagged and delivered lots of snappy statements throughout the night, including a savage Canada 150 joke that brought down the house.

For a full list of Dora Award winners, go to tapa.ca.