A MIDSUMMER NIGHTS DREAM by William Shakespeare (Shakespeare in High Park/Canadian Stage). At the High Park Amphitheatre. Runs to September. 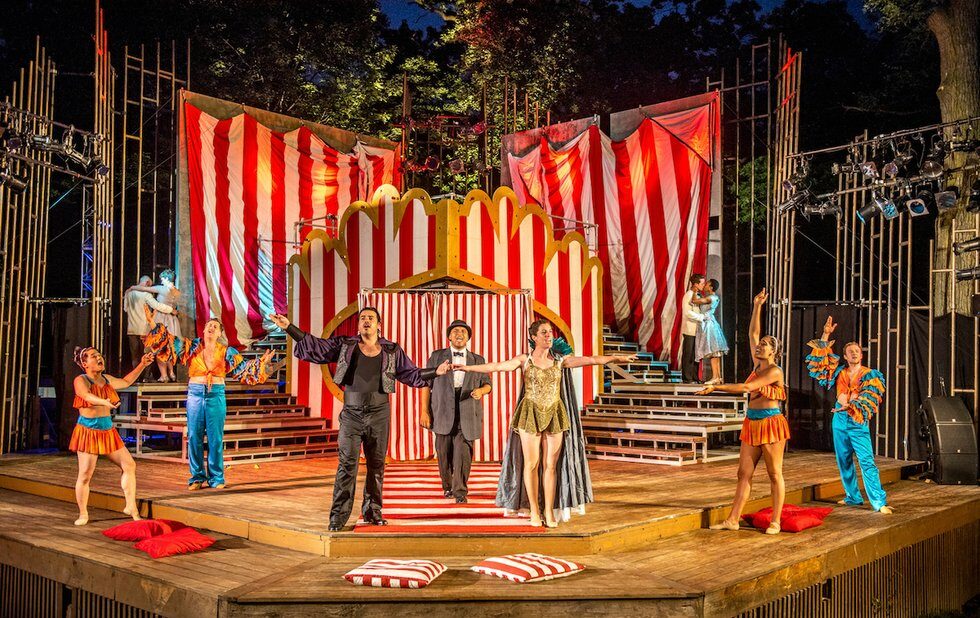 Returning to again helm the comedy offering of Shakespeare in High Park (running in rep with Romeo And Juliet), director Tanja Jacobs takes her vibrant, animated approach from last years 70s-disco-hotel-set Twelfth Night up a notch for this fabulous Fellini-styled circus-themed romp.

Between large, eye-pleasing red-and-white striped curtains, the enchanted big-top action follows forbidden lovers Hermia (Amaka Umeh) and Lysander (David Patrick Flemming) as they steal away into a nearby forest where magical creatures confuse their affections.

Jacobss heightened sense of style maximizes the Bards humour here with big, well-timed stunts, and running gags especially recurring bits featuring an aspect of Pucks wardrobe. Flemming gets lots of laughs for his initially nerdy and prudish Lysander (who, with thick, black-framed glasses and slicked hair looks strikingly like MSNBCs Joe Scarborough), as does Rachel Cairns as love-crazed Helena in her dogged pursuit of Jakob Ehmans Demetrius.

But the shows best characters come to life once magic is introduced. These include crowd-pleasing flamenco-styled fairies led by Queen Titania (Naomi Wright), who, decked out in colourful orange and turquoise frills, navigate the stage in cute and funny group choreography, scoring big laughs and stealing every scene theyre in.

Jason Cadieux is another standout, offering a massive, amphitheatre-filling comic performance as the vainglorious would-be leading man Bottom in the play-within-a-play, and as the mischievous fairy King Oberon, who has many laugh-out-loud interactions with his checked-out spritely servant, Puck (Peter Fernandes).

James Buntons delightful sound design aptly conjures the whimsical spells afoot with short songs punctuating certain scenes one sweet number that gets repeated a few times later in the show features a super-catchy hook thats almost too good not to be turned into something more substantial.

The result is an appropriately dreamlike affair, and a pitch-perfect counterpoint to Frank Cox-OConnells gritty and violent Romeo and Juliet. Together they comprise the strongest pair of offerings in High Park since Canadian Stage began running two shows in rep back in 2014.

So whether youre a long-time fan, or curious newcomer to Torontos outdoor Shakespeare scene, youre going to want to catch both.