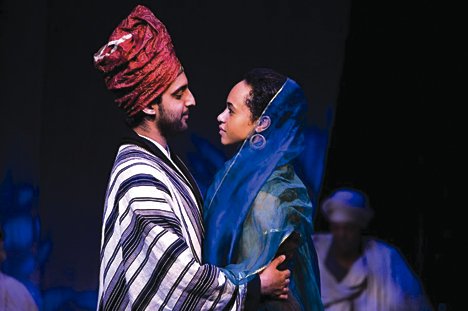 Take a trip to Ethiopia, both ancient and modern, in Wise.Woman.

Rebecca Fisseha’s play looks not only at the meeting of King Solomon and the Queen of Sheba but also at their contemporary counterparts, the Canadian-raised Saba, who returns home to be reunited with her childhood partner, Solomon.

The show moves in quicksilver fashion between the two periods, with other characters (advisers, girlfriends, merchants) paralleled in the storylines.

The truly wise woman here is director ahdri zhina mandiela, who makes the transitions seamless and often striking, playing up the differences in language, tone and rhythm. She uses a chorus not only to create mood through song and movement, but also as pieces of the set. Kim Purtell’s lighting and Julia Tribe and Reva Quam’s lush, flowing costumes help establish the time periods.

At the production’s centre is Cara Ricketts, playing both Queen Mak’da and Saba. The former is a curious, low-voiced woman drawn to the king (Ash Knight) and able to challenge him with her own wisdom, the latter, vocally higher-pitched, is more overtly sexual and engaging, even when she’s not sure how to deal with Solomon’s (Peter Bailey) former girlfriend (a nuanced Tanya Pillay).

Knight’s regality adds depth to the ancient scenes, while Bailey’s flirtatiousness is a believable part of the modern Solomon. Walter Borden’s Tamrin begins as a figure of fun but becomes, in the older tale, a mentor and recounter of wonders Meghan Swaby’s comic Ashmodai feels overdone.

The distinct worlds shift back and forth with increasing speed. In its last few minutes, this tale of courtship, relationships and freedom jumps to a heightened theatrical level, thanks to the magic of mandiela and Ricketts.