How to fight activist burnout

If we’re going to tackle huge issues like the climate crisis, artistic practice and activism can't be separated anymore 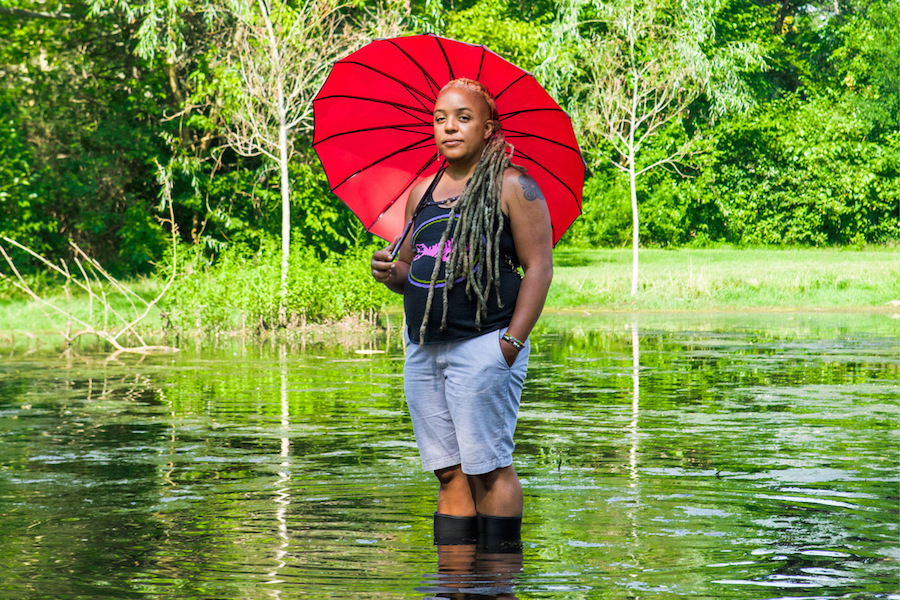 I spent most of 2017 in a deep depression. Was I burnt out? I’m not sure. I’d been working pretty much full time as an activist since 1998, while also working jobs and eventually having a busy art career. But I was unable to do much more than cry, sleep and cry some more. I’ve had many periods of depression – I’m a mad artist – but this was different. It was an intense time of activism fighting for justice for Andrew Loku, Abdirahman Abdi and Amleset Haile and so many others as part of the Movement for Black Lives. We were working all the time, I had interpersonal struggles and it all became too much.

This burnout affected everything: my art practice, my organizing and activism, my family life. I struggled to do mundane things, so complex problem-solving seemed impossible. But with the support of a community of friends and lovers, I made it through this difficult period. I accessed care supports, I had a team who checked in on me regularly. I was lucky. I survived. So many activists I know don’t make it through these periods. I remember so many whom we have lost, the list of names growing as the years roll on.

It’s been decades since we’ve seen the kind of political divisiveness we are experiencing today. We have never needed our artists and activists more. But what happens if we burn them out?

I have been on the front lines of activist movements like Black Lives Matter and fighting for prisoner and disability justice and transgender rights for over 20 years. I know first-hand what activists have experienced in terms of violence, harassment and trauma. That is why my artistic practice involves writing love letters to activists, and drawing huge portraits of them. I want to celebrate and nourish them so they have the strength, support and will to keep going. For society to push forward in the face of issues like the climate crisis, police brutality, inaccessibility and crushing anti-Blackness, we need to care for activists before the toll on them becomes too great.

That is why I’m reaching out to marginalized BIPOC artists to become part of the revolution. Our artistic practice and activism cannot be separate anymore. We must use every form of communication as an agent of change. This doesn’t necessarily imply aggression – sometimes we can seduce.

In 2012, an outpouring of love and support seemed like a good idea. I just had my child and was feeling the power of love in a deep and profound way. We had just closed the Prisoners’ Justice Action Committee, which had run in the city for seven years, and I was feeling the love for my fellow activists. I began researching the often hidden and underground letters that activists have written to each other in times of struggle. I found troves and began reading aloud to audiences.

I read a letter James Baldwin wrote to Angela Davis while she was imprisoned that famously ends with, “If they come for you in the morning they’ll be coming for me at night, therefore peace.”

I read letters Leslie Feinberg wrote to CeCe McDonald, and from an open letter the late Canadian environmental activist Tooker Gomberg wrote to all activists. His letter propelled my love letter project the most – he wrote about disability, isolation and how sustained relationships outside of activism are essential to wellness. He wrote that letter in 2004, right before he took his own life.

My project, Activist Love Letters, encourages people to think about their role in sustaining movements by writing their own letters. I’ve since mailed thousands of letters around the world as a salve to heal activist burnout.

The feminist author and activist Toni Cade Bambara has said the goal of the marginalized artist is to make revolution irresistible. I love that word: irresistible. It’s like a lover who is afar, someone you can’t wait to see, touch and hold. But that lover is social change and lovemaking is the revolution, self-determination and freedom. Whatever I’m doing as an artist must meet this goal.

I’ve been organizing since the mid-90s and I’ve seen countless small tiffs grow into big chasms that organizers can’t bridge. I’ve seen conflict resolution fail to mend wounds, the ways that we have inadvertently hurt each other. How will these left-over conflicts plague us once we are done fighting? We will all still be here and will have to figure shit out together.

In search of answers, I spoke with some comrades in the struggle about burnout and care.

“As activists we don’t always consider what it means to live in balance and I have burnt out so many times because of that,” says Giselle Dias/Niigaanii Zhaawshko Giiz-higokwe. “Now that I am more attuned to what my Spirit needs I care for myself holistically.”

I’ve been reflecting on what a holistic sense of care could look like in my life.

For several years I’ve been doing acupuncture with a long-time activist friend Lamia Gibson. “If those who are leading the revolutionary movements of our time do not have ways to regulate their nervous systems, harmonize spirit and directly increase resiliency through treatment they will not make it,” they told me. “We cannot afford to do any less than ensure every leader, every activist, has access to frequent and regular care.”

I have observed first-hand the impact of building healing justice work into my own activism as I try to make change happen. How we can create conditions that would allow for all to have access to the kind of care that Lamia describes? It makes me think of so many scrapped programs, like the guaranteed annual income pilot that could have allowed people a living wage and a chance to make it.

Thinking back on my depression in 2017, I wonder what caused others to tip over into burnout?

Activist and DJ Nik Redman, musician and organizer Rosina Kazi and I discussed this.

“The human mind, body and soul can only operate in crisis mode for so long before it crumbles or burns to ashes,” Redman says. “We activists are in a constant fight/flight mode because we are dealing with communities in crisis. You have to take care of yourself. You either slow down or fall down. If you need a break, take it on your own terms.”

“I recognized after my mother passed that I was a workaholic and that the time I should have spent with her was spent burning myself out in a system that doesn’t work for most of us,” Kazi chimed in. “In order to let go of this way of being, I had to let go of this idea of ‘time’ and ‘control’ and really work to connect back into a way of being that reflected the natural world of collaboration and community, not the industrial one based on competition and individualism.”

We have a lot of work to do collectively to create the kind of world where activists are supported in taking breaks. One way I care for myself is through my artistic practice. My two SummerWorks shows deal with activism and the ways we harm each other through organizing – intentionally and unintentionally.

Working with choreographer Rodney Diverlus, we crafted burn, burned, a clash of dance and textiles that imagines the tensions in the calm after the storm. We came to this piece after working together as activists for the better part of four years with Black Lives Matter Toronto. We’ve worked together as artists loosely before, but this is our first proper collaboration.

“The life of an activist is a life of perpetual burnout,” he told me. “Most of us come into our activism already burnt out from living life in the margins. We fight injustice out of a need, we fight each other out of unresolved trauma, a fight that burns what little fire we have left from living. We burn, and we are burned. This endless burning of things and self guts movements of our fiercest warriors. It leaves community ties in tatters, lives shattered and relationships that cease to matter.

“Taking breaks from the fight has been the only way to stop this endless cycle,” he continued. “Remembering that life is more than what I’m up against. Life is what I have to live for: love, family, art and community.”

The American writer, spoken-word artist and activist Walidah Imarisha wrote that all activism is science fiction because we are daring to imagine another world into existence. Is all science fiction activism, though? I’m trying to create speculative fiction that gets at the irresistibility of another world being possible. I’ve written short stories about the future. In each story, I reflect on the past – our present – to better understand what is happening right now. When I began working with the Toronto Biennial of Art, curators Candice Hopkins and Tairone Bastien challenged me to turn one of the stories into a full project. Ten months later I’m getting ready for Antarctica, a short performance set within an immersive art environment featuring textiles, portraiture and video. It tells the story of land-born Antarcticans who have been sent to the “wide white continent” to set up colonies for the rich to survive.

In real life, 11 people have been born in Antarctic waters, 10 sent there explicitly to stake a future land claim. I flip this premise: what would happen if they sent these 11 “home” to set up colonies? There are complex questions about climate change, government processes, human relationships and colonialism. At least one land-born is an activist who tries to organize the colonists to resist being the tools of colonialism. She faces an uphill battle. I draw on my activist experiences and extrapolate what might happen were I sent to do the government’s bidding against my will.

I’m working harder than I ever have this summer, well aware that I need to begin living these practices if I am to “stay in the struggle for the long haul,” to quote Gomberg.

I am looking forward to launching these projects, engaging with audiences and then taking a much-needed break – a pause, a moment of rest amidst the flurry of a Black activist life in the centre of this north part of Turtle Island. To heed the words of my comrades and intentionally spend time finding balance.

We’ve got major fights ahead in the face of conservatism and outright fascism of the right. There’s a federal election coming up and huge potential for some sweeping changes – let’s make sure they are the changes that we‍, the people, want. We need to hold our electorate accountable to our needs. As we head into autumn we need to consider how politicians are ignoring anti-Blackness or Missing and Murdered Indigenous Women and Girls, what they are addressing and what they are willfully avoiding. Vote with your power, and if that doesn’t work, consider other tactics. First we need to heed Gomberg’s words. We need to rest so that we can meet these challenges and win. All power to the people!

For more SummerWorks coverage, check out NOW’s list of 10 artists to watch here.