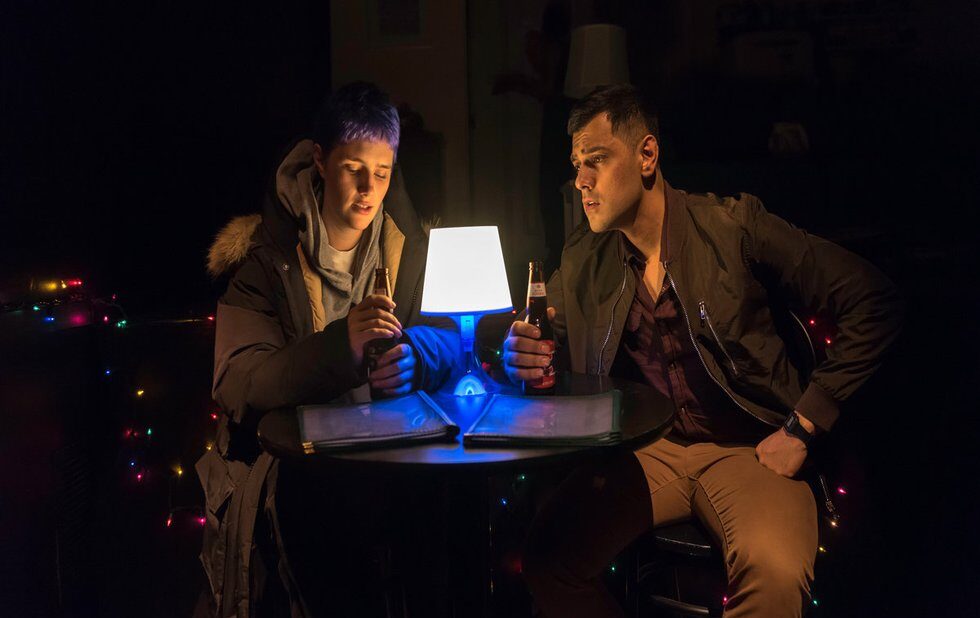 Characters like Libby Osler's emotionally checked-out Libby and Gabe Grey's talkative cop Jaggy are at the heart of After Wrestling. (Photo by John Gundy)

The last we saw of up-and-coming Vancouver-NYC writing duo Bryce Hodgson and Charlie Kerr was Kill Your Parents In Viking, Alberta, which played at the Storefront Theatre in 2016. Now theyre back with another disturbing sibling comedy that swings unpredictably between laugh-out-loud hilarious and heart-wrenchingly sad.

With Hodgson also directing, the story focuses on Leah (Libby Osler), whose younger brother Hogan (Kerr) lives in her Vancouver apartments pantry closet space. Both their lives have been effectively on pause for over a year as they each wrestle with trauma from the suicide of their close childhood friend Gibby (Anthony Shim), who still appears to Hogan in pill-and-booze-induced hallucinations. The pairs fazed-out couch-and-sweatpants existence is disturbed by the arrival of Jaggy (Gabe Grey), a well-meaning police officer obsessed with wrestling and karaoke who tries to date Leah.

With his richly decorated living room set, Hodgson provides a realistic base onto which he layers magical and dream-like elements especially Hogans frequent consultations with the apparition of Gibby, who appears to him as a radio DJ pedalling relationship advice.

With quick blackouts between short scenes often punctuated by one-liners or staticky sound cues, the result sometimes feels like panels of a stylized graphic novel brought to life, but it also nicely emulates the blurring of reality Leah and Hogan are experiencing thanks to a combination of mental anguish and prescription drugs. This choppy approach sometimes interrupts the flow, particularly in a section toward the end, but not enough to adversely impact the whole.

Intriguing characters ably conveyed by the strong cast especially the odd-couple vibe between emotionally checked-out Leah and talkative Jaggy are the heart of this play, and even if in a few places their motivation is a little sketchy, you leave wanting to see more of them.

The duos script is intricate and turbulent, with funny, awkward and absurd situations frequently morphing into soul-crushing moments of loss, regret and hopelessness. Sometimes the layers of symbolism recurring colours, words, places are overly cryptic, but the central exploration about the perils of concealing ones true self hits home hard.