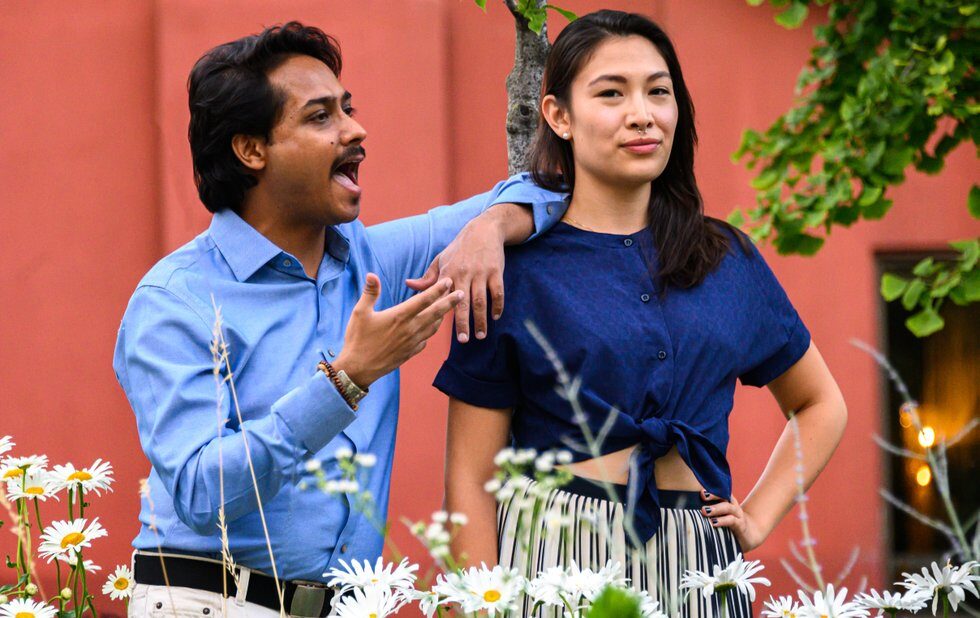 Youve got to be pretty confident to do Shakespeare in as busy a public space as Berczy Park at Front and Church (the little parkette with the fountain surrounded by dog statues). But Dauntless City Theatre lives up to its name by performing the Bard amongst curious onlookers, barking dogs, smooching lovers and the occasional hooligan shouting from the window of a passing car.

Its too bad that theyve chosen the problematic Alls Well That Ends Well, a work that requires clarity and a strong directorial vision to succeed.

Humble orphan Helena (Liz Der) cures the King of France (Christopher Mott) of an ailment, and as a reward he allows her to choose a husband from among his court. She picks Bertram (Chanakya Mukherjee), the son of her benefactor, the Countess of Roussillon (Andrea Lyons). Helenas been secretly in love with him for years, but hes just not that into her, fleeing to Italy but not before informing her that hell only marry her if she bears his child and wears his ring.

What ensues isnt the most elegant plot, filled with lots of unfunny shenanigans, much of it involving Bertrams friend Parolles (played in a gender reversal here for some reason by Annelise Hawrylak) and the foppish valet Lavatch (Tallan Alexander).

Worse, its hard to understand Helenas love for Bertram, one of the most despicable men in all of Shakespeare. And neither Der nor Mukherjee make us understand their characters.

Director Scott Emerson Moyle provides an explanation in an intriguing twist near the end (one which received applause), but it feels like a trick it hasnt been supported by anything preceding it.

And Mukherjee seems emotionally detached from the entire play.

The charm of this Alls Well comes from the creative use of the space. Guided by the genial French lords Dumaine the Younger (Holly Wyder) and Elder (Anthony Botelho), who play instruments, we travel around the parkette to the various locales. Moyle makes fine use of concrete benches to suggest court life and rolling hills to evoke more rural scenes.

The outdoor setting makes certain lines resonate for instance, its fitting that, at least at the shows evening performances (there are also matinees), Helenas statement Come, night end day! occurs around dusk.

And while there are lots of distractions (and some inevitable sound issues), the open-air production also allows you to look beyond the action sometimes the characters are engaged in scenes that, while not centre stage, add a bit of subtext to their storylines.

More of that and this Alls Well could have been much better.