Almighty Voice And His Wife is delightful and discomforting 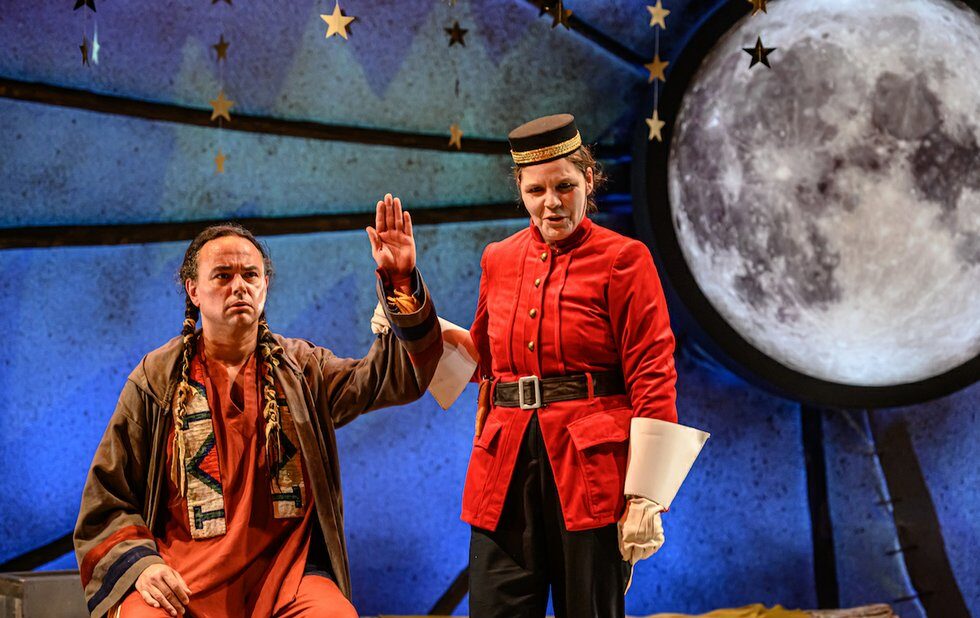 The first Indigenous production mounted by Soulpepper is a stirring version of Daniel David Moses’s complex 1991 play about cultural depictions, and therefore perceptions, of Indigenous people.

The show is divided into two distinct sections: the first act is a speculative retelling of the 19th-century manhunt for Almighty Voice (James Dallas Smith). In 1895, the respected Cree warrior shot and killed a Mountie while resisting arrest after escaping from jail, resulting in a two-year search culminating in his death.

Moses imagines an untold love story happening behind the events, and in a Brechtian-style sequence involving scene titles and short vignettes, shows us Almighty Voice falling in love and starting a life with his wife, White Girl (Michaela Washburn).

Smith and Washburn have a compelling chemistry that captures White Girl’s fear for her husband as well as the couple’s fierce desire to protect the life they want to create. Jani Lauzon’s thoughtful direction gives the actors room to breathe, allowing their palpable connection to bring the script to life.

The second act marks a jarring tonal shift as the play evolves into a macabre Vaudeville scene between an Indigenous ghost (Smith) and a Mountie (Washburn). Invoking a long tradition of satirical performance (often the only artistic space Indigenous people could address racism, as Lauzon notes in the program), the second act is a kind of retelling of the first that reminds us of the historical (and current) stereotypes informing the drama. It’s both delightful and discomforting, inviting viewers to question representations of Indigeneity, then and now.

Lauzon achieves an impressively surreal tone thanks to zany sound effects and brash musical scoring that punctuates (deliberately) awkward physical comedy. Smith and Washburn maintain their connection as they skilfully shift from the sincerity of the first half to the extreme performative quality of the second, while still conjuring emotional depth in surprising moments.

Ken Mackenzie’s set design creates mood while reflecting deeper themes. In the first act, the backdrop shows the intersecting poles at the top of a teepee, which suggest both tension and hope while signaling that our perspective might be off-kilter. In the second, a large moon hanging centre stage doubles as a drum, adding both metaphorical and physical dimensions to the action.

This production is a robust and touching rendition of a complicated script that not only explores Canada’s long history of whitewashing but how ideas of representation and performance continue to demand reflection.