ART by Yasmina Reza (Soulpepper). At the Young Centre for the Performing Arts (50 Tank House). Runs to September 7.. 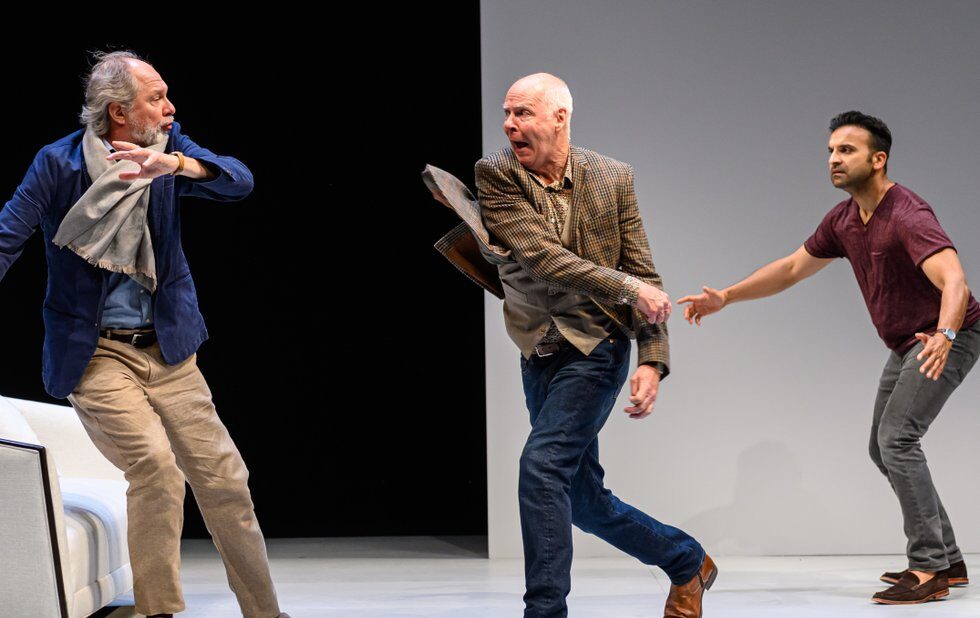 We live in polarizing times, with people regularly arguing over everything from the alt right and the environment to bike lanes and womens roles in the Marvel Cinematic Universe. So in one sense Soulpeppers revival of Yasmina Rezas talky, debate-filled play Art celebrating its 25th anniversary this year seems fitting. But in 2019, the work also feels like so much upper-middle-class flim-flam.

On the surface, the play looks at how a piece of art affects the friendship between three straight male Parisians.

Dermatologist Serge (Diego Matamoros) has paid a huge sum for an abstract white-on-white painting by a fashionable artist. His lifelong friend Marc (Oliver Dennis), an engineer, is angry and incredulous, while the younger Yvan (Huse Madhavji), a shopkeeper, is a fence-sitter, agreeing privately with both men until hes forced to choose sides.

Reza is less interested in the painting than in what it says about the men. The joy in any production comes from the mens realizations that their perceptions of each other are as arbitrary, and as subjective, as their view of art.

Philip Akins staging lives up to the plays grand title. Gillian Gallows set is suitably spare and minimal, with Dana Osbornes costumes telling us as much about the characters as the dialogue (the footwear alone is revealing) and Bonnie Beechers lighting pin-pointing certain moments just-so. Thomas Ryder Paynes sound design includes a whoosh sound during scene transitions that gives the production momentum and foreshadows a significant detail in the plot.

Even if the play feels a touch trivial today, its always been a terrific showcase for actors.

Matamoros captures Serges pride and self-satisfaction with ease, scurrying around in the plays first half hour with lots of energy until his friends responses to his purchase begin weighing on him. His recreation of a woman dismissively waving around smoke one of the plays best passages is rich with dramatic detail.

Denniss Marc is a droll, witty observer, all too eager to point out Serges pretensions. Madhavji, although hes got diction and projection issues, makes his Yvan whos currently anxious about his impending marriage a believable follower.

Christopher Hamptons translation from the French remains wry and entertaining. What doesnt translate to the North American viewer is the mens friendship.

Having straight male friends talk about loving each other and argue over fine art doesnt seem believable.

There are many universal, if first-world-problem truths in the play. But even the most metrosexual of bros wont buy into whats going on.