NOW MagazineCultureTheatreAugust: Osage County gets a near-perfect production at Soulpepper

August: Osage County gets a near-perfect production at Soulpepper 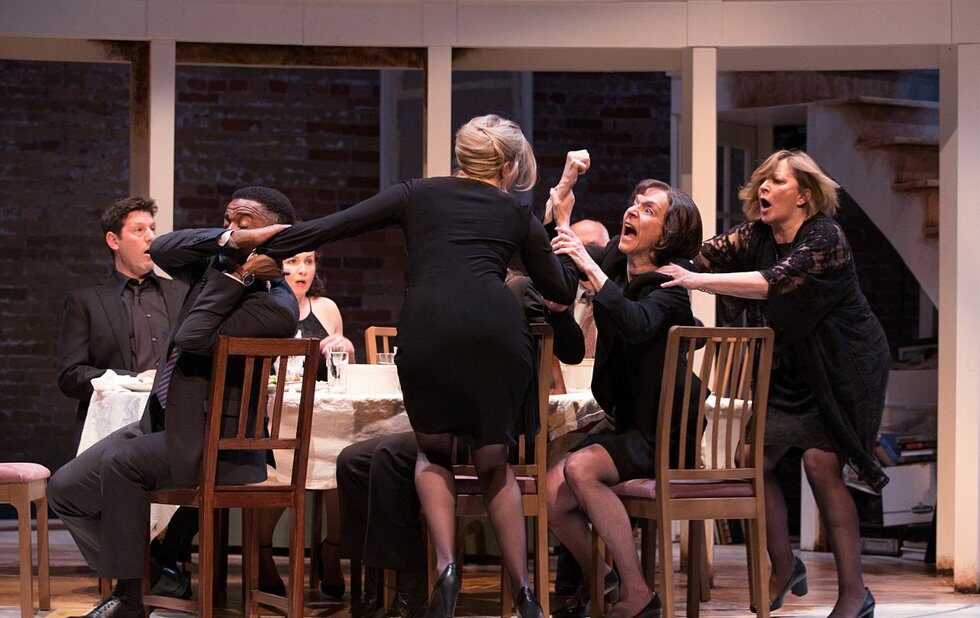 “You know, this country was always pretty much a whorehouse, but at least it used to have some promise,” says a character late in Tracy Letts’s August: Osage County. “Now it’s just a shithole.”

That assessment may have seemed overly harsh back in 2007, when the darkly funny American drama premiered, first at Chicago’s Steppenwolf Theatre and then, later that year, on Broadway, where it ran for a year and a half and won a raft of awards, including the Tony for best play and the Pulitzer Prize for drama.

But these days? Yeah, “shithole” about sums up the current state of the union.

The epic, three-and-a-half-hour play focuses on the Weston clan of Pawhuska, Oklahoma. Alcoholic patriarch Beverly (Diego Matamoros), once a promising poet and academic, has disappeared, leaving behind his embittered wife, Violet (Nancy Palk), who’s dealing with cancer and drug addiction, and Johnna (Samantha Brown), a young Cheyenne woman whom Beverly has recently hired to cook and tend to Violet.

Soon, the rest of the Weston family convenes at the homestead, including Violet’s sister, Mattie Fae (Laurie Paton), her husband, Charlie (Oliver Dennis) and their son, Little Charles (Gregory Prest) and the three Weston daughters, Ivy (Michelle Monteith), the only sister to stay living in the same town Barbara (Maev Beaty), who arrives from Colorado with her husband, Bill (Kevin Hanchard) and teenaged daughter, Jean (Leah Doz) and Karen (Raquel Duffy), who lives in Florida and brings her slimy fiancé, Steve (Ari Cohen).

That’s a lot of people to introduce, but Letts, director Maxwell and a superb cast efficiently parcel out information, suggesting relationships, character histories and, most of all, family secrets in lively, and at times very funny, dialogue.

Beverly’s disappearance has upset the family balance, and soon the queen bee Violet and the frustrated Barbara are jockeying to be in charge.

What emerges, especially on second viewing (I saw the Broadway production, but this version is just as good, if not better), is how carefully Letts has set up patterns among the characters.

Which daughter is most like her mom? Has one daughter married a version of her dad? Violet and Mattie Fae have the same caustic sense of humour. Even staging helps, with one booze-drinking scene being echoed two hours after an earlier one, letting us see the connections between the drunken characters.

Maxwell’s production reflects the chaos happening in the family. Deanna H. Choi’s sound design starts off with a familiar country tune, which gradually becomes more dissonant. And Camellia Koo’s set, a rather fussy and confusing replica of a grand old house, begins showing intentional signs of decay from the second act onward.

But this is a magnificent showcase for an acting ensemble like Soulpepper’s, and in their characters’ rhythms, jokes and rivalries, the actors feel like a genuine, dysfunctional extended family.

The two standout performances, of course, belong to the women playing the sparring Violet and Barbara, and they’re so well matched the stage practically ignites.

Palk, her voice adjusted to suggest Violet’s mouth cancer, knows everyone’s business and uses it to survive Beaty’s Barbara, from the moment she steps onto the stage, is gradually losing hope, and the way she clings to it, and the pain and depth she expresses, is simply harrowing to watch.