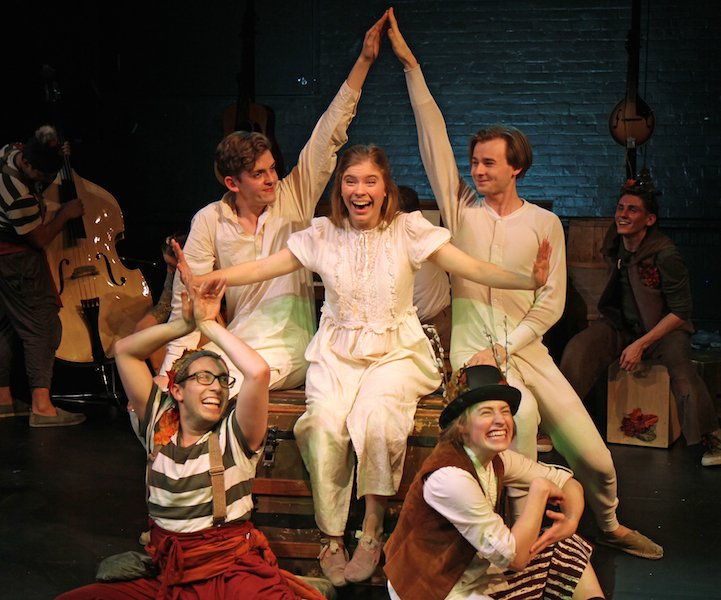 How do you adapt J. M. Barries Peter Pan, Or The Boy Who Wouldnt Grow Up for children aged three and up? You do what Bad Hats Theatre has done and write it from the point of view of children who have never grown up. Director Severn Thompson and her cast and creative team recall the transformative power of a childs imagination and imbue the 75 minutes of this rumbustious adaptation with uncontainable energy.

In a childs mind you can change one thing into anything else simply by declaring it so: people into heroes and villains, objects into anything required and motion into any sort of action.

So the company uses no stage machinery but merely endlessly inventive physical theatre to create its magic.

Peter (Fiona Sauder), Wendy (Lena Maripuu) and her brothers John (Victor Pokinko) and Michael (Landon Doak) fly without harnesses and pulleys. They are simply lifted up by other cast members and carried about. Tinkerbell the fairy is a golden tennis ball thrown or bounced from one actor to another and voiced with amusing gibberish by Reanne Spitzer. A sheet can be a bed sheet or the sky or the sea depending on how its used. A trunk can be a trunk or a bed or an island or even the jaws of the crocodile that eats up the more comic than menacing Captain Hook (Graham Conway). Peter Pans followers, the Lost Boys, turn into pirates with the simple addition of an eye patch and bandana.

Matt Pilipiak serves as the enthusiastic narrator who guides us through the bare bones of the story whose riotous action pauses for six lovely folk-influenced songs by Doak and the company.

Peter Pan is an ensemble piece where precisely coordinated movement and mime tell us more about the characters and their actions than props or words.

Some three-year-olds were so excited by the play they were literally jumping up and down. We more sedate adults, reminded of the power of imagination, inwardly did the same.