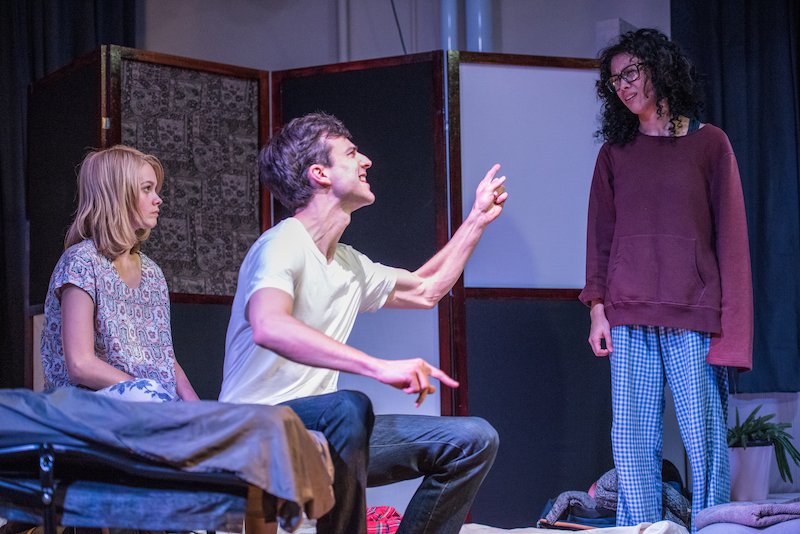 Since its debut in 2012, Bad Jews has become one of the most frequently produced plays in the world, and this production shows off what makes it so good.

From a Manhattan studio apartment, two characters express their amazement at the beautiful view through the window. The other two characters brothers whose parents own the place seem oblivious to its luxury, having grown up in the building. This dichotomy sets the stage for an emotional, intense and often hilarious family meltdown.

In the aftermath of their grandfathers funeral, first cousins Daphna and Jonah (Rebecca Applebaum and Daniel Krantz) await the arrival of Jonahs brother Liam (Kristopher Turner), whos late because he lost his cellphone on a ski trip with his girlfriend, Melody (Julia Vally). When the couple finally arrives, Daphna and Liams already strained relationship devolves into an all-out battle as each tries to stake a claim to a Hebrew pendant that had belonged to their late grandfather, a Holocaust survivor.

Daphna says she deserves the inheritance because shes more religiously devout Liam believes its his due as the eldest male. Stubborn self-indulgence seems to be their only shared family trait.

Playwright Joshua Harmon has captured the nuances of these millennials so well that you might think the play is verbatim theatre. After listening to Daphna expound on her Judaism, an audience member exclaimed to her neighbour, OMG, shes your sister.

Harmon uses clever humour to highlight flaws and provide some of the plays funniest moments, such as Daphnas ignorance of Porgy And Bess, composed by the Jewish Gershwin brothers, or her description of the blond shiksa Melody as being live water-birthed in a Talbots.

Applebaum revels in indignation as Daphna, rambling self-righteously and often cruelly without a hint of reflection or remorse. Turners Liam provides an excellent foil to Daphna entitled, irascible and a proud secular sellout. Despite playing a character more thinly written than the rest, Vallys facial expressions as Melody say more than her words. And Krantzs Jonah, always striving to maintain passive neutrality, becomes essential to the plays powerful final moments.

Michele LonsdaleSmith directs deftly, escalating the tension in well-timed increments, and Mercedes Papalias set is meticulously designed, right down to the funeral memorial cards on the side table.