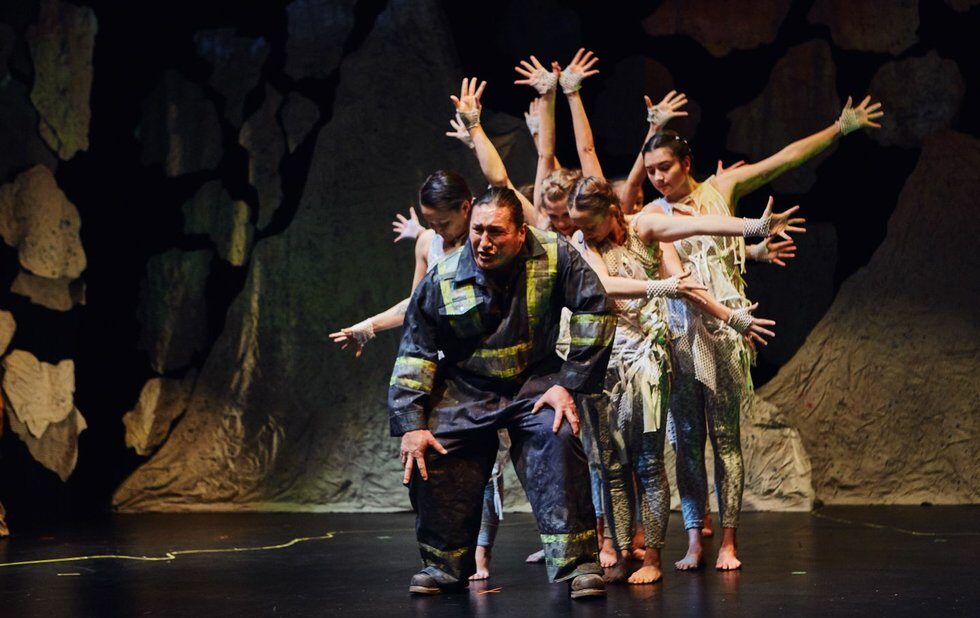 Sheldon Elter and the Bear ensemble will make you roar with excitement. (Photo by Alex McKeown)

After making its world premiere in Toronto last year, writer/director Matthew MacKenzies award-winning production of Bears comes roaring back for a run at the Factory.

Bears takes the audience on an adventurous heros journey. Floyd (Sheldon Elter), a Metis oil sands worker on the run from the RCMP after a workplace accident, makes his way through the Canadian wilderness along the Trans Mountain Pipeline route, beginning in Alberta and travelling west to the Pacific. During his trek, Floyd is watched over by the spirit of his mother (Tracey Nepinak) and guided by a chorus of nymph-like creatures who morph into various elements and animals to help protect him.

Fascinated by bears since boyhood, Floyds mother nicknames him Little Cub. The ursine influence on his life amusingly includes a love of fresh berries (causing his mom to impose a half-pint daily limit) and an aversion to authority. Grizzlies figure prominently in the play, and his interactions with the animal become increasingly profound.

Combining his own bear-like stature with genuine emotional heft, Elter delivers on both the comedy and sorrow of Floyds situation and adapts quickly between solo sequences and interactions with the chorus performers. The eight-person chorus works in unison like a gold-medal team of synchronized swimmers, meticulously creating various environments along Floyds travels. And Nepinak looks on tenderly, her motherly concern adding to but never overshadowing any scene.

Bears is as much a work of dance as drama, and choreographer Monica Dottor (who also designed the costumes) brings the natural world alive in a joyous cacophony of clapping fish, babbling river otters and fanciful butterflies. The addition of nets and ropes in some parts add to the visual feast, as does T. Erin Grubers rustic set.

MacKenzies staging intersperses Dottors movement sequences with a succession of monologues that boast exquisite use of language. Animals tromp and fish are like ephemera in light of the horrific effects of environmental devastation. The script wields political bite and humour with equal agility. Laughs are plentiful and clever, like the description of spawning salmon as an all-you-can-eat sashimi buffet.

In his playwrights notes, MacKenzie acknowledges and thanks his elders for sharing stories and guiding him as he engages with his Indigenous heritage. Bears proves that he is a worthy storyteller in his own right. If youve been staying inside to avoid this winters wrath, its worth coming out of hibernation to catch this amazing production.