NOW MagazineCultureTheatreSoulpepper’s Bed And Breakfast serves up humour with heart

Soulpepper’s Bed And Breakfast serves up humour with heart

BED AND BREAKFAST by Mark Crawford (Soulpepper). At the Young Centre for the Performing Arts (50 Tank House). Runs to. 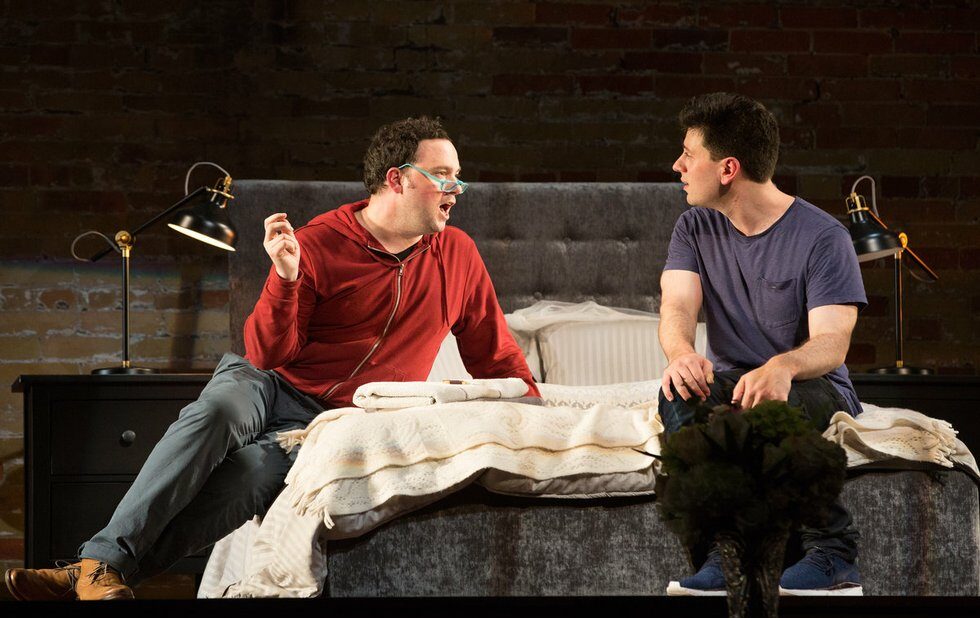 While Toronto theatre audiences know Mark Crawford as a fine comic actor (Factorys Prairie Nurse, Groundlings Measure For Measure), hes also a well-known playwright. His works have been produced throughout the country but, until this Soulpepper production of Bed And Breakfast, never locally.

Hopefully its success the show has hit written all over it means his other plays, like Stag And Doe and the recent Blyth Festival premiere of The New Canadian Curling Club, will follow along.

Brett (Gregory Prest) and Drew (Paolo Santalucia) are a middle-class Toronto couple trying to buy a house. But when Bretts late aunt leaves him her house in a small town three hours from the big city, the two decide to uproot their lives and move into the house to set up the titular B&B.

You might expect a fish-out-of-water tale of two gay guys in the country, and it is that, to a degree. But Crawford doesnt hold back on depicting small-town homophobia, internalized shame and generations of family secrets.

Among the plays 22 memorable characters are a flirtatious barista owner, a chatty real estate agent, the realtors baking-obsessed son, an octogenarian neighbour and a gruff, monosyllabic contractor.

There are even a couple of pets, cleverly named after Canadian gay (or should-be-gay) celebrities.

The main draw of the show is that the two actors play everyone, with only their skill, a few props including an earring, a trucker cap and a cane and Bonnie Beechers subtle lighting changes to set them apart.

And the ease with which the two actors (who are a couple in real life) switch characters is astonishing, particularly when Prest morphs into the awkward adolescent Dustin, whose hoodie takes on a life of its own, or when Santalucia changes his posture and voice to become the intolerant contractor Doug.

Near the end of the first act, theres a scene set in a cafe in which the actors play five people, and its to Kerr and the actors credit that youre never confused about whos talking.

Although the Fawlty Towers-like farce doesnt come until midway through the second act, its not the point. Crawfords comedy is accessible but not dumbed-down. In fact, its quietly subversive, beginning and ending with an image that, even two decades ago, would have been radical.