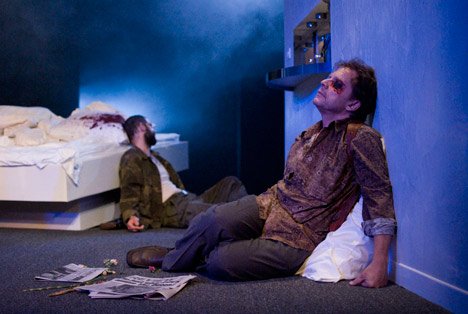 Strange thing about great theatre: even the playwright can’t predict the impact the work will have on the audience.

Sarah Kane, the author of Blasted, always said her play doesn’t give answers, and only asks questions. But her incendiary drama actually makes pointed commentary on masculinity, terror and war.

That’s why, though its queer content isn’t as obvious as it is in a play like, say, The Boys In The Band, it’s a completely appropriate work for Buddies in Bad Times’ new artistic director Brendan Healy, who also helms this terrific production, to program.

Blasted opens in a pristine hotel room overlooking a street where war may be raging. In the room, middle-aged Ian (David Ferry) and Cate (Michelle Monteith), who looks like a schoolgirl play out their strange relationship that criss-crosses between abuse and love.

A starving soldier (Dylan Smith) suddenly enters carrying a rifle, upending the power dynamics, and by the end the hotel room has turned into a steaming war zone where rape and cannibalism rule.

Yes, it’s grim, but it’s also absolutely riveting. That’s due in part to the performances from its committed actors. As the spectacular Ferry plays him, you can never despise the racist, pathetic Ian, and Monteith, cementing her status as one of the best actors on current Toronto stages, plays Cate as a possibly mentally challenged teen who knows a sexual thing or two.

As a production, Blasted is a wonder. Julie Fox’s design, matched by Kimberly Purtell’s lighting, grasps Kane’s desire to basically blow up the play and take us on a journey to hell. And the show’s sound, by Richard Feren, has just the right intensity.

I get that the material is challenging, but I wish the program weren’t so laced with “viewer discretion advised”-type content. This is actually a strangely tender play, with one of the most moving last lines ever.