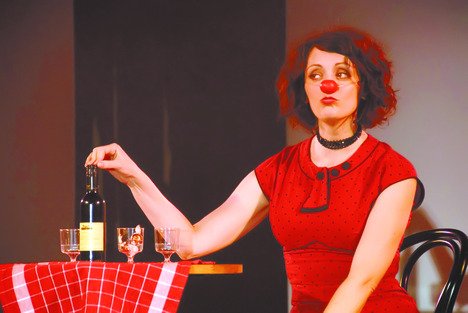 Rebecca Northans Mimi will leave you shaken and stirred.

Whether you’re single, coupled or somewhere in between, you need to book a Blind Date with Rebecca Northan.

The multi-talented actor/director/improviser has concocted an ingenious show – remounted for World Stage – that takes long-form improv to new heights.

She plays Mimi, a 30-something wo man with a red clown nose, a black choker and a French accent, who’s been waiting two hours for her latest blind date. Fed up, she plucks someone from the audience to join her onstage for a possible love connection.

What follows, of course, depends on the man she chooses. She and fel low actors Jamie Northan and Kristian Reimer schmooze the crowd beforehand, scoping out potential dates – presumably a straight male, preferably with a girlfriend or wife at his side.

Her blind date at last Friday’s performance was Carlos, a 31-year-old tech company worker who’d like to be retired in a few years and living on a beach, possibly with his girlfriend of nine months, Micaela.

Northan and designer Brandon Kleiman have set up two playing areas: one where the “date” occurs, and another where her date can take a “time out.” The latter concept addresses any anxieties the date may be having and also lets Northan suggest ways the plot could develop. The other two actors and sound improviser Sean Bowie add to the fun.

While Carlos wasn’t the most revealing – or audible – date (you could see Northan subtly trying to draw him out), the show succeeds because of the performer’s generosity, wit and (as Mimi might say) joie de vivre. Northan knows how to listen, an essential part of any good blind date.

On Friday, Mimi and Carlos began their night in a restaurant, drove to a secluded park (which Mimi hinted was right near her home) and then – through the magic of live theatre – took part in a touching final section that shouldn’t be given away.

In between hilarious riffs on laundry routines, discrimination in Hardy Boys books and what constitutes a casual relationship, the two managed to touch on universal themes like loneliness, communication and, of course, love.

It’s a perfect marriage of theatre and comedy, and a wonderful international calling card for one of the country’s most underrated artists.[rssbreak]