NOW MagazineCultureTheatreBrain Storm is compelling but feels like a workshop production

Brain Storm is compelling but feels like a workshop production

Taliesin McEnaney’s play about the mysteries of the mind is well acted and visually impressive, but needs severe editing 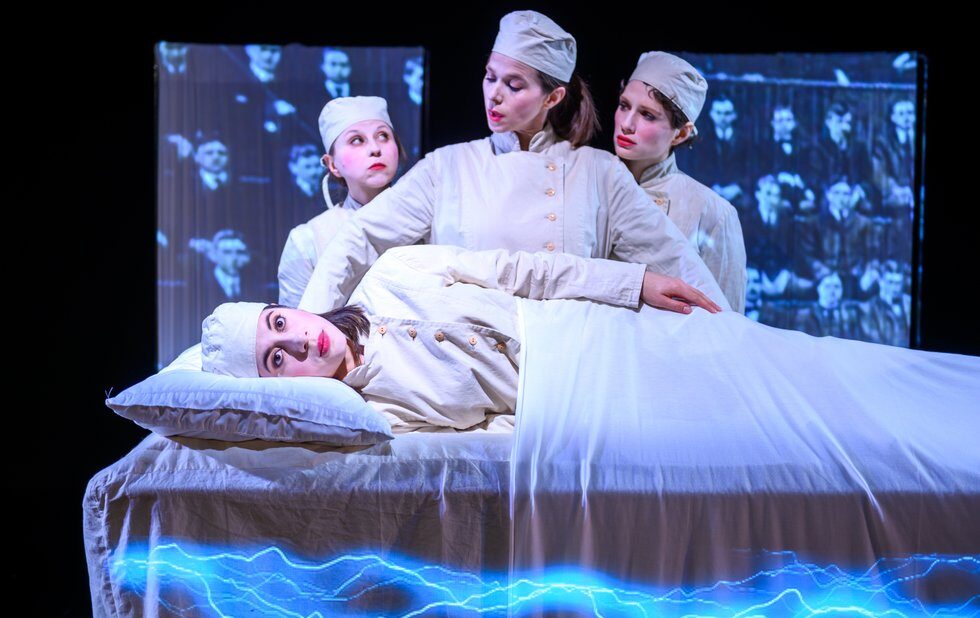 Originally presented at the 2017 Fringe, this world premiere of Taliesin McEnaney’s inspired exploration of the mind’s plasticity still feels like a workshop production.

The play follows Kate (Shayna Virginillo) as she undergoes surgery for grand mal seizures, only to wake up to cognitive deficits that both fragment and magnify her senses. Forced to quit her job and stop writing her play, Kate sees her life shift to rehabilitation and isolation.

These scenes are interspersed with memories of her grandmother (Hayley Carr) speaking to spirits, and a surreal envisioning of Dr. Wilder Penfield’s seminal brain surgery. By drawing on both mechanistic and spiritual understandings of the mind, McEnaney questions whether radical alterations of perception are deficits or windows into alternate realities.

The cast is uneven, but Maïza Dubhé and Alexandra Montagnese are particularly strong as they depict a wide spectrum of doctors, from the bombastic Penfield to indifferent interns to compassionate occupational therapists. Montagnese’s witty depiction of Kate’s self-absorbed and obtuse friend offers a reflection of a world alternately oblivious about and hostile to anyone suffering cognitive disabilities.

(This show, on the other hand, foregrounds accessibility: each performance is a relaxed one, and there are open captions available for several performances.)

William Bezek’s set/costume design incorporates several versatile flats that function as walls and as projection screens, reinforcing the visceral experience of the fragmentation of Kate’s perspective and identity. Melissa Joakim’s projection design is impressive, reflecting both Kate’s attempts to mimic shapes and words, and nerve clusters that look both like spinal columns and tree roots.

The choreography (uncredited) is effective in the subway scene, but could be tighter in the opening where the four actors move in unison, and more rehearsing would make the final combination of movement and projections much more powerful.

Despite many compelling elements, most scenes drag and the script needs editing for the overarching themes of disorientation and integration to really emerge.