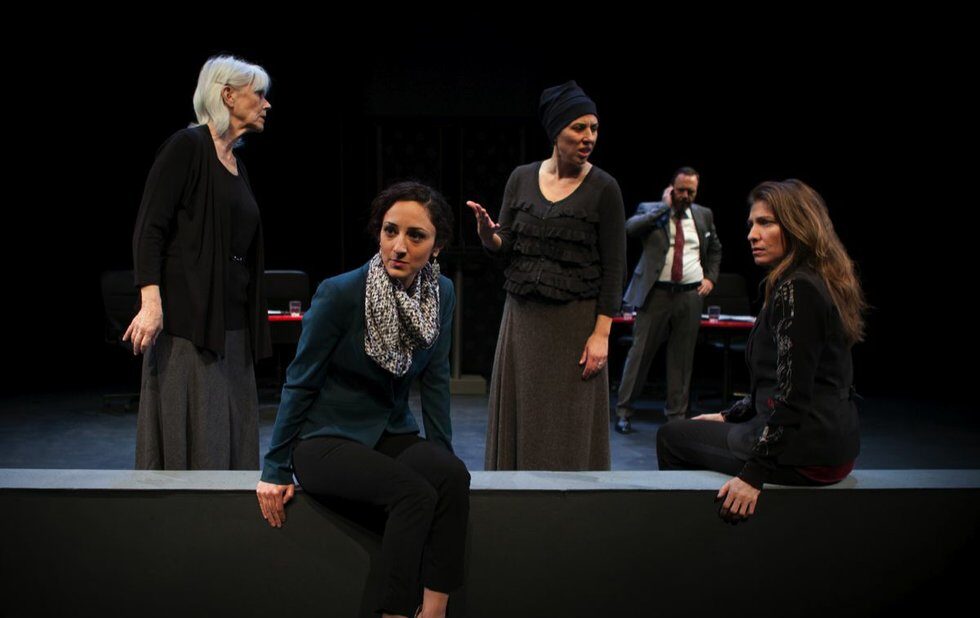 The idea of four women debating God’s worth doesn’t sound like it has much theatrical potential, but with the intellectually engaging Unholy, Diane Flacks has devised a canny piece with a ton of political resonance.

In this Nightwood production directed by Kelly Thornton, four women are verbally duking it out on a panel for a YouTube series.

Taking the opposing position is Margaret (Barbara Gordon), an activist Catholic and former nun who was excommunicated for approving a life-saving medical procedure forbidden by the church. And the playwright appears as the cynical, caustic queer atheist Liz, who’s convinced that wherever there’s God, women’s oppression follows.

Flacks happily flaunts her status as a Bible story nerd – the exchange regarding Sodom and Gomorrah is very funny, as are many of the zingers the debaters hurl at each other – and she’s able to give all of them a decent argument to share. Occasionally a woman from one side agrees with someone on the other, demonstrating the dispute’s complexity.

This is by no means a formal debate – it is designed to be seen online and led by a smarmy host (Blair Williams). The participants routinely throw anti-Semitic, homophobic, Islamophobic and every other kind of insult at each other. And often the women make their point by using personal information against their opponents in a way that would get shut down in a formal contest. All of this deepens the tension.

But the key theatrical device of portraying each of the characters’ backstory gets them out from behind the podium via a series of flashbacks, which gives insight into the characters and helps us to empathize with them.

The crucial plotline, however, involves the growing attraction between Maryam and Liz, deftly played out in scenes set in a hotel room. Here’s where some of that personal ammunition gets divulged.

The cast is very good, Flacks’s character maintaining her edge while plainly hiding some personal pain. Landau is warm and toasty as Yehudit and handles a cringeworthy drunk scene with skill (She also disappears into a minor role as an unwanted child haunting Margaret). I do wish Gordon played the tormented nun with a little less ditziness – the portrayal borders on ageist. But it’s Yaraghi who’s the revelation here, prowling the stage and embodying pride in her Muslim identity.

Flacks flirts with farce towards the end in ways that aren’t entirely believable, but never mind. It’s good theatre.