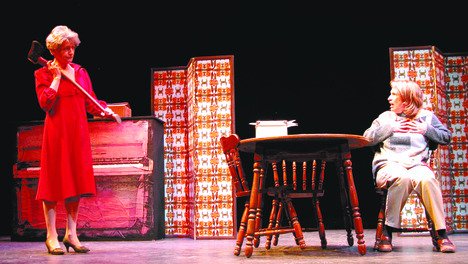 The children-mourning-their-parents play has become a cliché, but Tessa King’s Buried jolts it back to life.[rssbreak]

After the death of their mother, Jean (Rosemary Dunsmore), sisters Anne (Christine Brubaker) and Rachel (Fiona Highet) bicker about her legacy while taking care of their father, Bill (Ian D. Clark), who’s got Alzheimer’s. Things are further complicated because Anne’s still haunted by Jean’s ghost.

King’s script swerves successfully from dark comedy to pathos, and under Andrew Lamb’s direction, the actors squeeze every suggested meaning from their lines. The music between scenes works on several levels, too.

Not all the symbols are carefully interwoven into the piece, but that’s niggling. This piece, developed at the Tarragon’s Playwrights Unit, shows lots of potential. Love to see an expanded version.