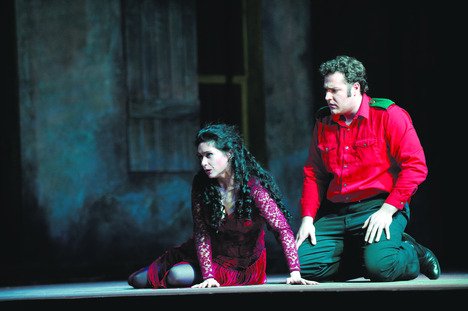 A successful production of Carmen, Georges Bizet’s best-known opera, should burn with a sensual flame.

The Canadian Opera Company has the right match in Israeli mezzo Rinat Shaham, but the wood – the two men singing opposite her – takes too long to catch fire.

Updated to the 1930s, the production follows the fortunes of the flirtatious Carmen, who at the start of the opera seduces soldier Don José (Bryan Hymel) so she can avoid jail. Soon after, she turns her attention to flashy toreador Escamillo (Paul Gay), but José’s fixation on Carmen leads to violence and death.

Rory Macdonald’s conducting gives a snappy, electric bite to the music from the first notes.

Shaham crafts a sinuous figure who, enjoying her power over men as well as her freedom, uses her wiles to get what she wants but ultimately yields to her dark fate. The mezzo’s singing matches her strong stage presence.

Too bad that José and Escamillo don’t come up to her level. Gay’s voice is too light for the role, and he lacks the toreador’s necessary jaunty charisma. Hymel is almost characterless in the first two acts, despite a good voice, but in the final two acts, especially José’s final confrontation with Carmen, he’s dramatically involved.

Both men could take acting lessons from some of the other performers. Jessica Muirhead’s innocent Micaëla, angel to Carmen’s devil, sings sweetly and lends an inner radiance to what can be a stolid role.

Even better is the quartet of Gypsies (Teiya Kasahara and Lauren Segal) and smugglers (Justin Welsh and Adam Luther) who surround Carmen. Under Justin Way’s direction, the five performers create engaging, believable scenes, especially in a playful act-two quintet.[rssbreak]