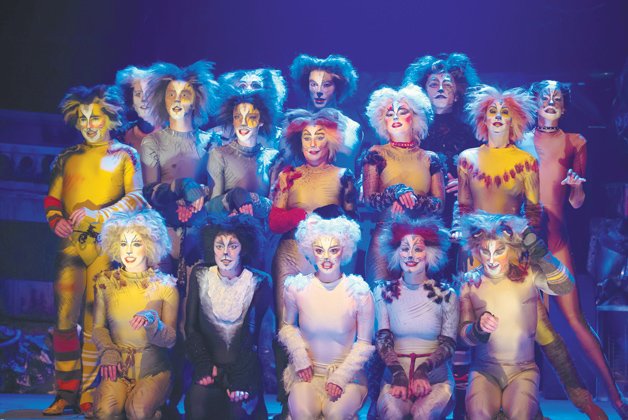 With lyrics drawn mostly from T.S. Eliot’s whimsical Old Possum’s Book Of Practical Cats and music by tunesmith Andrew Lloyd Webber, Cats is best approached as a feline-themed musical revue for children or very simple adults. There’s little plot, no real villain and not much conflict.

What it does have, however, are a few decent songs. Lloyd Webber knows how to pen a hook, whether it’s the rhythmic inventiveness of Jellicle Songs For Jellicle Cats or the hammy AM radio ballad Memory.

So even after wondering why you just spent two and a half hours watching actors in cat makeup and furry suits prancing about, you’ll likely find yourself humming some of the melodies.

Granted, this production isn’t the best argument for a remount. Production designer Tim Webb’s junkyard set feels cramped on the narrow stage, and there’s simply not much room for the performers to execute Gino Berti’s energetic, if repetitive, choreography.

Director Dave Campbell tries to bring some of the action out into the audience, with cats running up and down the aisles and large spider webs hanging from the balcony.

The cast is uneven. Michel LaFleche has a nice clear voice and terrific stage presence as the show’s quasi-narrator, Munkustrap, while the ultra-flexible Michael Donald and Neesa Kenemy toss off their crowd-pleasing duet with elan as Mungojerrie and Rumpleteazer. Cory O’Brien sinks his teeth into the old theatre cat Gus, who relives his acting days as swashbuckling Growltiger in one of the show’s many set pieces.

The main disappointment is Ma-Anne Dionisio, whose Grizabella hits her high notes in the song Memory but sounds like she’s learned the role phonetically, pronouncing syllables without any meaning or emotion.

I’ll spare you details about her exit, which is supposed to be a theatrical marvel but in this production seems like a cheap and confusing gimmick: an anticlimax to a show that barely has a story.