Champions Of Magic provides solid family fun over the holidays 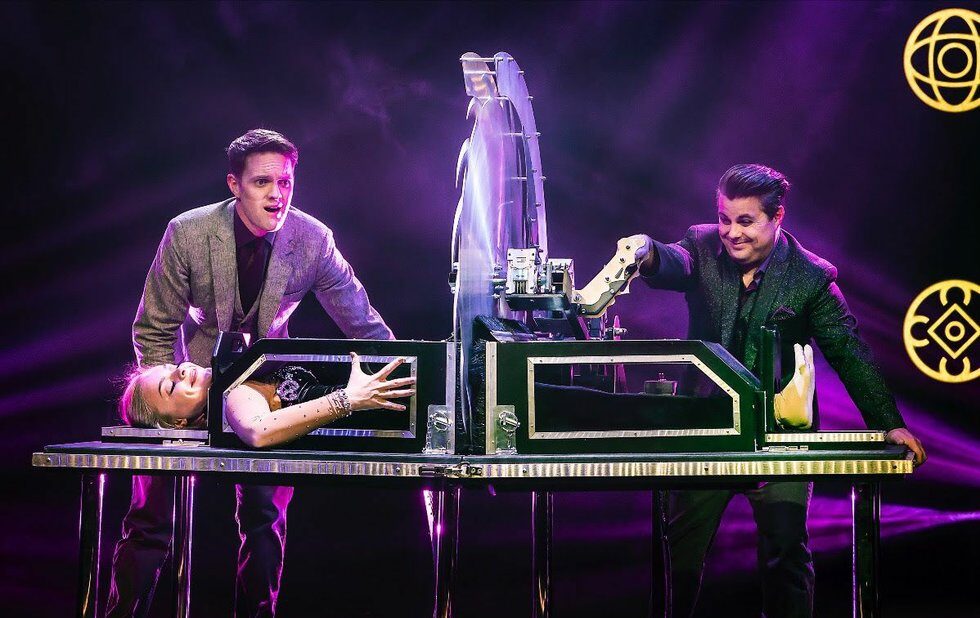 For some reason, magic shows are popular during the holiday season. A couple of years ago, Mirvish brought in The Illusionists Live From Broadway at this time. And now Starvox Entertainment has programmed Champions Of Magic to run through early January.

Perhaps witnessing people be cut in half (and then reappear, whole), seeing boats or cars appear out of thin air or having your minds read goes down well after a few drinks at that festive party, or provides relief from crowded malls.

You’ll see all of those things in this show, which has been touring the UK for years, including a run in the West End.

The show’s acts three soloists and one duo each take on a different kind of magic. Young & Strange specialize in large-scale illusions. That’s them in the picture above, sawing a woman in two. They also have a mind-boggling trick in which the shorter of the duo is put in a box and the larger squeezes him until he appears to be about a foot tall. I don’t know how they do it.

Kayla Drescher excels at more intimate illusions, especially ones involving the picking of cards. Fernando Velasco triumphs in two death-defying stunts in which he escapes from a straightjacket or handcuffs and padlocks. Harry Houdini is his obvious influence, and he’s got just as much charisma as his idol.

Finally, the suave, amusingly self-deprecating Alex McAleer is the show’s unofficial host as well as a very entertaining mentalist/mind reader. He’ll often appear after one of Velasco’s crowd-pleasing stunts, open his eyes wide and then proceed to wow us with something smaller-scale but still impressive.

Not all the magicians are equally good performers. McAleer is obviously a pro, and Young & Strange exude the same tall/short, thin/big vibe that Penn and Teller possess. An extended fast-paced routine in which the two perform Vegas-style tricks, complete with showgirl, tiger (not what you think) and cheesy 90s music, is a highlight.

Drescher, the only American and woman in the bunch, relies on a heightened, frazzled energy to get by, but never seems completely at ease. On the night I saw the show, she did have a good rapport with an audience member in a cute, if repetitive, routine that extended throughout the show.

Velasco hails from Mexico, and while his diction isn’t often the best, his jaw-dropping stunts speak a universal language.

I couldn’t find a director credited with the show. That explains the awkward segues, which often feel abrupt and kill momentum despite some pumped-in dry ice and electrical sparks.

Still, Champions Of Magic provides two hours of crowd-pleasing family fun. And let’s face it. At this time of year there are other, far less entertaining ways to make money disappear from your wallet.